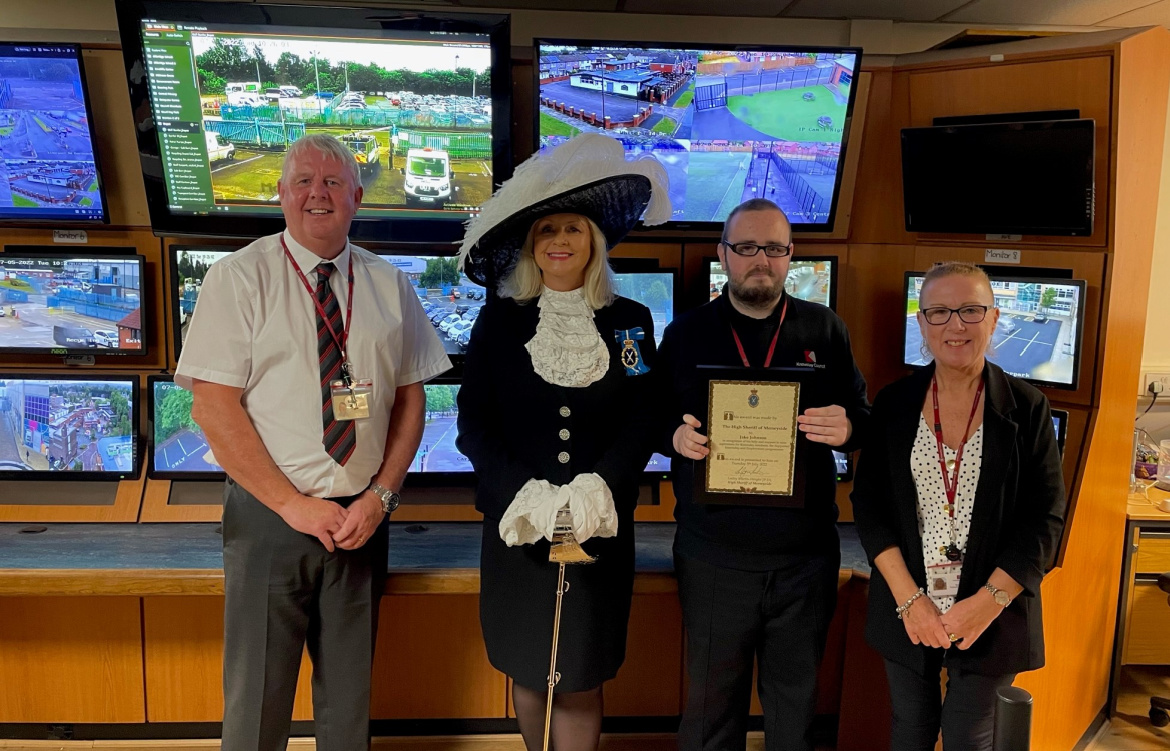 Jake Johnson from Knowsley has been recognised by the High Sheriff of Merseyside for his achievements after thriving in a permanent job he secured with Knowsley Council following a work placement on Knowsley’s first Supported Internship programme in 2016.

Jake joined the Council’s CCTV Control Room as one of a group of young people working in services across the Council. Like many on the programme, it was Jake’s first ever experience of the working environment As a result of his determination and commitment, and with support from Knowsley Community College tutors, a Council mentor and his colleagues, Jake proved his value within the workplace and became an important member of the CCTV control room team; so much so, he secured a job with the team when his internship finished in 2017.

Since then, Jake has gone on to develop news skills and confidence. He’s helped to deliver training sessions about learning disabilities and difficulties to local businesses, encouraging organisations to support someone with special educational needs and difficulties in their workplace.

He’s also involved in the Council’s ‘Meet the Employee’ programme. Jake features in one of the films where employees talk about their roles which is shown to pupils with SEND to raise aspirations around employment and the benefits of having a job. After watching Jake’s film, groups of pupils have visited him and the CCTV team to see first-hand the work Jake does and ask him about his job and employment journey.

It’s no wonder The High Sheriff of Merseyside was keen to meet with Jake when the CCTV team contacted her about Jake’s inspiring journey.

The High Sheriff of Merseyside, Ms Lesley Martin-Wright, paid a visit to the CCTV Control Room to see Jake at work and award him The High Sheriff award in recognition of all that he has achieved professionally and personally and in helping to raise the aspirations of pupils in Knowsley with SEND.

Jake Johnson, said “I felt really proud and happy when I received the award. It was really nice to meet the High Sheriff and I thank all my colleagues in work for helping me to develop and learn the skills needed for employment.”

Cllr Margaret Harvey, Cabinet Member for Children’s Services, said “It’s great to see Jake’s achievements officially recognised with the prestigious High Sheriff of Merseyside Award. He’s come such a long way from the shy, nervous teen who started on programme to the confident and inspiring person and team member he is today.

“It’s also great to see the long term success of our Knowsley Supported Internship Programme, demonstrating how our young adults can shine when given the opportunity which the programme offers. Well done Jake, you should be very proud of what you’ve achieved!”

Councillors back call for pay rise for local government workers

Top tips to enjoy a happy and healthy summer 2022