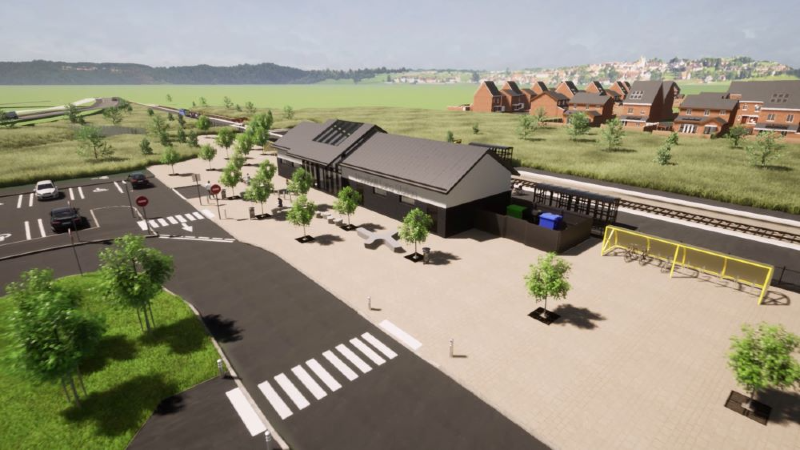 The new station will extend the Merseyrail network, which currently terminates at Kirkby, to a new location off Headbolt Lane.  This will improve transport links for the Northwood and Tower Hill areas of Kirkby as well as for Knowsley Business Park.

Northern Rail services from Manchester and Wigan will operate to and from the new three-platform station, which is also designed to support any future plans to build a new rail link to Skelmersdale.

The Liverpool City Region Combined Authority (led by the Metro Mayor) is delivering this project, in partnership with Knowsley Council, Network Rail, Merseyrail, and Northern Rail.  Funding for the scheme has been provided through the Government’s Transforming Cities Fund.

Over the last three months Network Rail has been completing preparation work for the new station. This has included:

Currently, Network Rail is on site widening the embankment to accommodate the new platforms and additional railway track. This work must be undertaken at night when the trains are not running to ensure the safety of workers who will be in close proximity to the live railway line.

Unfortunately, this work is resulting in some noise overnight in the area. In response to some concerns raised by residents, Knowsley Council has been liaising with Liverpool City Region Combined Authority and Network Rail to put additional plans in place to ensure that any noise disturbance  is kept to a minimum.

As a result, Network Rail has written to local residents this week (week commencing 20 June) to confirm that it will increase the number of people and machines working on each shift to reduce the number of noisy nightshifts required for the embankment widening work.

Contractors working on-site have been reminded to keep noise to a minimum and noise mitigations are also being implemented to the vehicles on site which will reduce the beeping sound as they move around.

The new station is scheduled to be completed in summer 2023.

You can find out more about the new station in our Frequently Asked Questions.

Finished school and not sure what to do next? Find out what is on offer for post-16 education

Check your health at the Wellpoint Kiosk