Most recent
Think before you park
Kirkby Gallery needs you!
North West needs to continue to stay at...
Home Children and Young People Year of celebrating GEM Places

Since launching in June 2018, Great Emerging Marvellous (GEM) Places has showcased an array of cultural events and activities in Knowsley’s libraries.  GEM Places aims to give more people access to art and culture in local libraries.

Over the last year, the borough’s libraries have played host to poetry workshops, storytelling sessions, comedy workshops, plays, targeted activities for residents with dementia as well as a range of workshops and courses provided by Knowsley Family And Community Education Service (FACE). The activities have appealed to the young and the old, catering for all tastes and interests so there’s really been something for everyone!

The most recent was the performance of ‘When Another Dragon Roars’, a thought-provoking production involving innovative storytelling, puppetry, and music, with feedback including “Fantastic theatrical experience for both adults and children.”

The project supports Knowsley Better Together, bringing people and organisations together for the benefit of Knowsley.  GEM Places has ensured the libraries are a well-used community resource as well as providing activities to bring people together.

Feedback from all events has been extremely positive and has helped to tackle a number of issues affecting residents such as social isolation. One resident recently attended a ‘Well Funny’ comedy workshop and left saying it had changed her life! By making the effort to leave the house had opened up new doors for the resident – she wanted to do more for herself and enrolled the next day on a FACE workshop.

Cllr Shelley Powell, Cabinet Member for Communities and Neighbourhoods, said “As you can see, the breadth of events and activities offered through the GEM Places project has been astounding. Feedback from residents has also been amazing with the majority of rating the activities as ‘excellent’. As well as providing great entertainment value, GEM Places is tackling issues that are important to our residents, such as targeted activities for residents with dementia and the important issue of social isolation. I know there is a fun-filled and packed programme for the coming year so I’d encourage you to attend one of these truly engaging events.”

Forthcoming events include Make Music Day on Friday, 21 June with the borough’s libraries hosting a range of activities celebrating music and song including choirs, music sessions for under 5’s and make your own instrument sessions.  Other events include art workshops with artist Joe Gibney, ‘A Wild Goose Chase’ which is Shakespeare-themed activities for pre-school children and their parents / carers, more storytelling sessions by John Kirk, ‘Words of Wisdom’ delivering creative workshops for older people and residents with dementia, performances of the play ‘Another Wintery Tale’ and theatre performance ‘Prince of Fire’.  FACE will also continue to offer a range of activities in the libraries including cake decorating and wreath making for Christmas.

GEM Places is funded through the Arts Council England. Many of the events are provided free of charge or at a substantially reduced price.

To keep up-to-date with what’s on as part of the GEM Places project, visit www.knowsleynews.co.uk 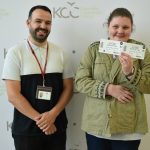 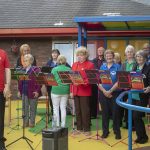