Home Community and neighbourhoods Do you remember the World War II camps in Huyton? 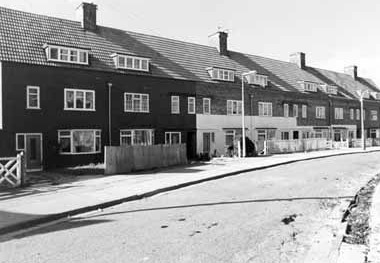 Do you remember the World War II camps in Huyton?

If you have memories of the World War II Internment and Prisoner of War camps in Huyton during World War 2, a research project would love to talk to you!

Personal stories and reflections are now being sought by the team at the Archive Resource for Knowsley (ARK).

What were the camps?

The Internment camp was set up in 1940 to accommodate German and Austrian civilians who were deemed a potential threat to national security. It was formed around several streets of empty council houses on Woolfall Heath and then made secure with high barbed wire fencing. Twelve internees were allocated to each house, but overcrowding resulted in many sleeping in tents.

Internees had little or no access to newspapers or the radio so had little idea what was happening to friends and relatives in the outside world.  A large number of artistic and academic refugees kept themselves occupied by lecturing and performing. These included artist Hugo Dachinger whose work is included in a book ‘Art Behind Barbed Wire’ which was created by Jessica Feather in 2004 and is still available to purchase.  It also included anthropologist Eric Wolf and composer Hans Gál, who wrote the classical music piece: the ‘Huyton Suite’. As a result the camp became known as ‘Huyton University’.

The Prisoner of War camp was situated on the King George V Playing Fields and only closed in 1948; some of its inmates stayed in Britain and married local women.  Amongst its inmates was Bert Trautmann, who later went on to be goalkeeper for Manchester City.

ARK is appealing for anyone who experienced life in either of the camps, or who lived or worked in Huyton at that time, to record a conversation about their recollections.

The recordings, along with photographs and film footage, will be used as part of a public exhibition that will go on display in Huyton Library in the summer. Following this, the recordings will be stored in the archive for future generations to access and learn from.

ARK has invited Lord Derby Academy students to work on the project. After specialist training they will be undertaking the interviews and taking some photographs of the current sites of where the camps once stood.

This is the fourth of nine exciting projects being delivered over three years after the Library Service secured a Heritage Lottery grant to develop the ARK, which houses documents, maps and photographs, dating back to the 13th century, that tell stories of real people living and working in Knowsley.

Jane Owens, Community History Development Co-ordinator for ARK, said: “We really hope people who remember the camps will get in touch and get involved. We’d like to build a detailed picture of what life was like at the time of the camps, for those living inside as well as nearby the camps.”

Interviews are planned to take place late April to mid May. If you would like to put your memories on record please contact Jane Owens on 0151 443 3729 or email jane.owens@knowsley.gov.uk.

Have you tried an eBook from your local library?