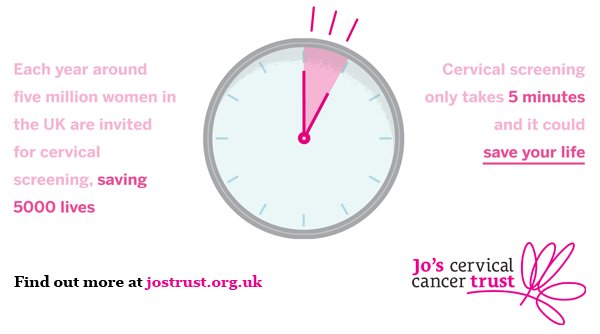 Women are being urged to attend their cervical screening appointments after the latest figures show a drop in attendance.

Cervical cancer is the most common cancer in women aged 35 and under yet new NHS Digital figures show a fall in the number of 25 to 29 year old women being tested.

The statistics show a drop in the number of women of all ages attending cervical screening, also known as a smear test, but worryingly only 62% of younger women took up the invitation for a test last year.

Cervical screening prevents up to 70% of cervical cancer deaths, yet if everyone attended screening regularly, 83% of cases could be prevented.

“It is of real concern that fewer women, particularly younger women are not being screened, with over a third of women under 30 not taking the test.

“If women are embarrassed about having the test or worried about what the test results might say, they should talk to their GP who can explain why the test is important.”

“Regular cervical screening offers the best protection against developing cervical cancer so please take up your invitation to attend your smear test.”

Women aged 25 to 49 registered with a GP are invited every three years and every five years if aged 50 to 64. The test detects abnormalities within the cervix that could, if undetected and untreated, develop into cervical cancer.