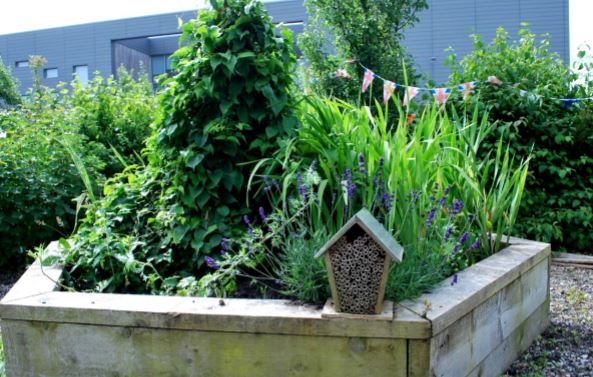 And the winner of best school garden is…

St Edmund Arrowsmith has the most enviable school garden in Whiston – and that’s official!

The high school, on Cumber Lane, was named First Prize Winner in the School category of this year’s Whiston in Bloom competition. A team of judges, headed by Councillor Dave Williams, visited the school premises and were delighted to see a section of the school landscaping dedicated to teaching gardening skills to the pupils. They heard that 20 pupils at the school, who have shown a keen interest in gardening, tend to the garden and do the planting in the raised beds, polytunnel and surrounding area. The polytunnel was well stocked with tomatoes, courgettes and aubergines planted by the pupils, and there were redcurrants and gooseberries ready for picking too. Judges were also impressed by the well thought-out recycling facility on the site, including a compost bay and compost bins. And it wasn’t only fruit and vegetables that were thriving in the school garden. Blue tit chicks had just fledged from one of the bird boxes – and the school’s Bug Hotel seemed to be fully booked! Off to uni? Make sure you’re protected against meningitis