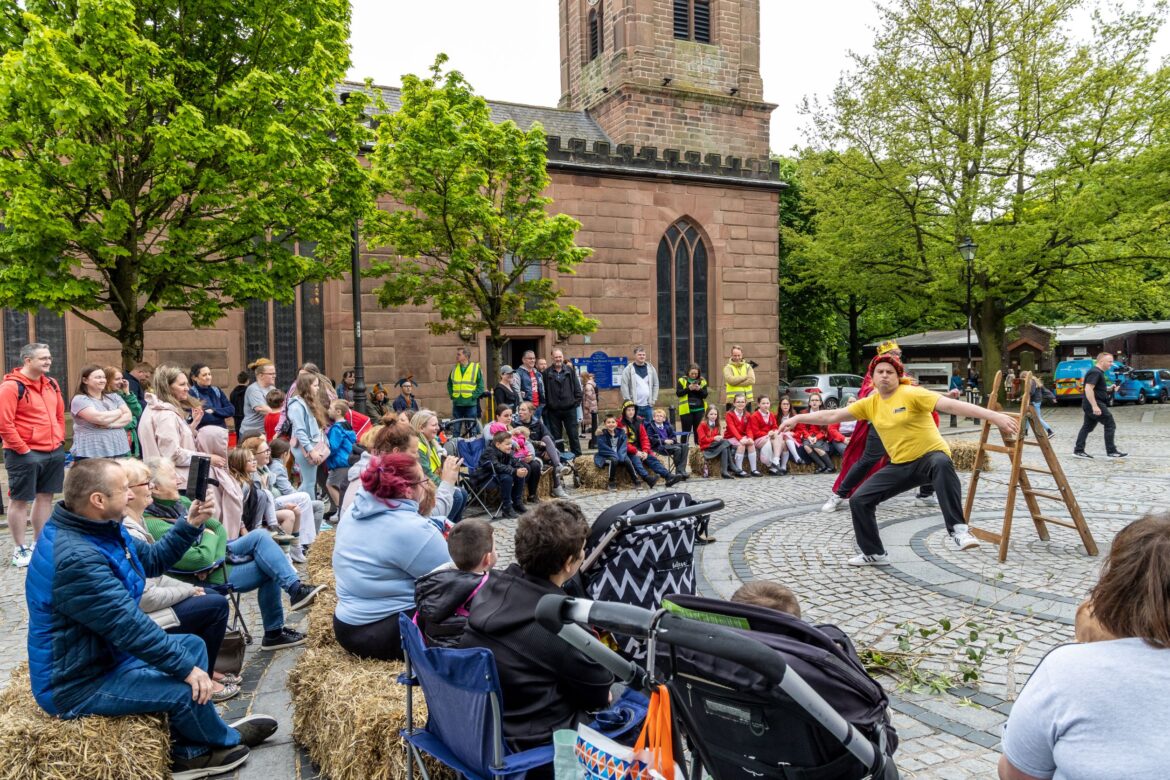 As part of Knowsley’s year as Liverpool City Region Borough of Culture, and to mark the fact that the Shakespeare North Playhouse will open in Prescot in July, the Fayre was extended to two days, and hosted a wider range of attractions and performances.

The town was a hub of activity with outdoor dance and theatre performances, circus skills, heritage walks, birds of prey, face painting, craft workshops and even the opportunity create a unique miniature cardboard replica of Prescot town centre.

The FREE festival celebrated the rich Elizabethan heritage of Prescot – which in Elizabethan times was the only place in the whole of the country, aside from London, to have a free-standing purpose-built theatre.

The Fayre was funded through the High Streets Heritage Action Zone Cultural Programme Grant, which was awarded to the Prescot Cultural Consortium in 2020.

Laura Collier is the Creative Director and Programmer at Shakespeare North Playhouse and Chair of the Prescot Cultural Consortium, she commented: “We were very ambitious with our plans for this year’s fayre as it is a very special year for Prescot and Knowsley. For the first time, the Fayre was extended to two days and welcomed local and national artist and performers, some completely new to Prescot and some of the much-loved attractions also returned. It was lovely to see the town centre full of people and energy and there was a real sense of community with everyone enjoying themselves.”

The Cultural Consortium was set up by Knowsley Council as part of the £3.1 million Prescot High Street Heritage Action Zone scheme, and the HSHAZ’s Cultural Programme, which is led by Historic England, in partnership with Arts Council England and the National Lottery Heritage Fund. The Cultural Programme aims to make the country’s high streets more attractive, engaging and vibrant places for people to live, work and spend time.

The enhanced Elizabethan Fayre is being funded via the HSHAZ Cultural Programme Local Grant under which Knowsley Council were awarded £80,000 in 2020, on behalf on the Prescot Cultural Consortium.

The Borough of Culture was first launched in St Helens in 2018, followed by Wirral 2019, Sefton 2020, Halton in 2021 and is currently held by Knowsley for 2022. The programme rotation will recommence in 2023 back in St Helens

Shakespeare North Playhouse will open its doors in July 2022 bringing people together to participate in a unique programme of performance, activities and conversations, inspired by Shakespeare but relevant to all of us.

At its heart, a traditional 470 seat timber framed theatre, that will host a mix of vibrant new performances. Theatre, music comedy, workshops, events and activities will spill out into the exhibition gallery, Studio and Performance Garden, creating an accessible space full of joy and creativity, where everyone is welcome.

Inspired by Prescot’s historic connections to William Shakespeare and a real love of story-telling, Shakespeare North Playhouse will play a key role in the ongoing regeneration of Liverpool City Region; a place full of brilliant people with a story to tell.

Working together with audiences, artists and local communities the creative programme, learning opportunities and social and events spaces will help to open doors, invite debate and inspire a love of learning that will reach far beyond the walls of Shakespeare North Playhouse.

The opening season of events was announced in March 2022 with tickets going on sale to the public at the end of April.

Prescot was selected as one of the 68 high streets to benefit from the High Street Heritage Action Zone project in 2020.

In Prescot, the £3.1 million heritage-led regeneration programme will see major investment from Knowsley Council and Historic England into a number of key projects. This includes the repair, restoration and conversion of the Grade II listed former Prescot Picture Palace cinema, the transformation of a Grade II Listed townhouse (formerly Prescot Museum) into a ‘makerspace’ for new and small businesses in creative, arts and digital sectors.

In addition, the funding will be used to provide grants to restore other historic buildings, transform disused land in the town centre and engage with the local community.