Home Latest news Together we can build safer communities 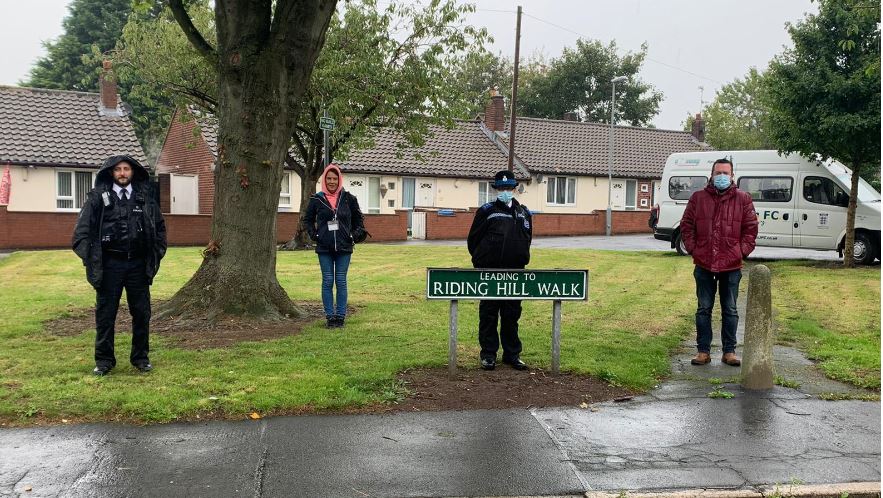 Together we can build safer communities

The coronavirus pandemic and resulting social distancing guidelines has meant that Knowsley’s Crime and Communities Team ‘Walkabout Wednesday’ haven’t been operating as usual.

Ordinarily the team, ward councillors and partners would visit specific areas and streets to knock on doors and speak with residents, face-to-face. However, the team are still tackling the issues that matter to residents and continue to visit areas in smaller numbers, while adhering to social distancing guidelines.

Every Wednesday we are sharing updates on what the team have been doing, and you can see previous week’s on Knowsley News

This week the team visited Riding Hill Road, Prescot and the surrounding areas following reports from residents of anti-social and criminal behaviour. The team issued letters to community members letting them know that their concerns are being addressed and urged them to share any information that may help further investigate who is responsible.

Thank you Knowsley’s Local Policing Team
Over the last month, officers working across Knowsley have arrested more than 200 suspects; continuing to support communities and seize weapons, drugs and firearms off our streets.

Successes from the last week include a Day of Action at Primrose Court, Huyton, joined by Knowsley Council’s Crime & Communities, Environmental Health and Street Scene Teams as well as Merseyside Fire & Rescue Service, British Gas, and members of the Police and Crime Commissioners Office. The day offered further presence from officers in the area and resulted in the arrest of a male on suspicion of abstracting electricity and drug offences. You can read more about the Day of Action here.

Other highlights from the last week include; an open land search in Tower Hill, Kirkby, conducted by local officers and volunteers from the Merseyside Police Cadet who seized a number of weapons, the arrest of two Huyton males for separate firearms incidents, and patrols continued across the borough, resulting in the seizure of uninsured vehicles, a cannabis farm in Huyton, and the arrest of 3 males in Westvale following the recovery of cannabis.

Cllr Shelley Powell, Cabinet Member for Neighbourhoods and Communities, said: “It’s fantastic to see the consistent and continued results from Knowsley’s policing team who are taking such positive action in the borough. I was also delighted to see the show of unity at the Day of Action and the number of partners and teams who contributed to such a successful day.”

Although the Crime and Communities Team may not be available to speak with you on your doorstep, they encourage you to continue sharing information with them.

Have your say on new Carers Strategy for Knowsley

Discover what you can do online and help to build a stronger, healthier Knowsley