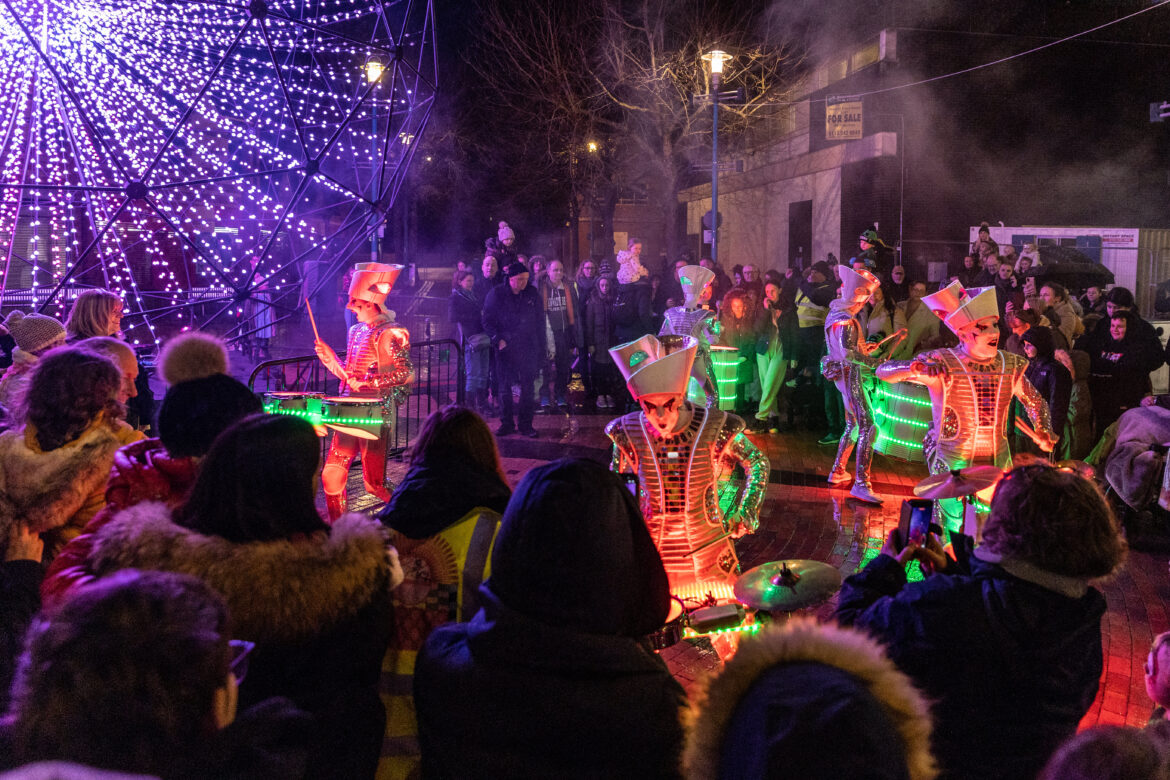 The two immersive light installations captured the imaginations of adults and children alike and will be on display until Saturday 26 February from 5-10pm every night.

For the launch event, Spark Illuminated Drummers brought the beats and entertained the crowds. Their performances got people into the party spirit, and despite the rain, everyone enjoyed their high energy routine – with many dancing along as well as capturing the moment on their phones.

Cllr Shelley Powell, Knowsley’s Cabinet Member for Communities and Neighbourhoods said: “The rain didn’t seem to dampen anyone’s spirits and it was fantastic to see so many people join us for the latest event celebrating our year as Liverpool City Region Borough of Culture.

“We are bringing culture to the heart of our communities and it’s clear there is an appetite for this based on the numbers who came out on Saturday. Significantly, Saturday’s event also demonstrated the wider economic impact that culture can have – with most bars and restaurants seeing an increase in footfall during the evening.”

Louise Olgun, owner of Solasta Steakhouse, Huyton Village Centre said: “Saturday was our opening night– and what a night it was! It was fantastic to see so many people in the Village, enjoying the artworks and then coming in for a drink afterwards. Having events like this is hugely positive to people, communities and businesses like ourselves. We’re delighted that Submergence and Singularity will be here until next weekend – we hope many more people make an evening of it and visit our restaurant.”

Submergence and Singularity are the latest instalments in Knowsley’s year-long Borough of Culture programme. So far visitors have enjoyed Aqualux in Kirkby, Magic Wood in Halewood, Gaia at St. Chad’s Church and Tall Tales in Stockbridge Village – with all attractions forming part of ‘New Dawn’ – a series of moments of light across the borough. New Dawn will come to a dramatic finale this Friday 18 and Saturday 19 February with New Dawn Spectacular at Knowsley Hall.

More about Singularity and Submergence
Submergence is a reflective, immersive walkthrough experience on display in Sherbourne Square in Huyton Village Centre. Consisting of thousands of individual points of suspended light, visitors are encouraged to enter the artwork to experience the amazing light illusion for themselves.

Singularity consists of 6720 controllable mapped points of light, made up of over 20,000 LEDs and is located just outside Peacocks.

You can find out more about the artworks on the Culture Knowsley website – www.cultureknowsley.co.uk

Medical Waste Disposal Facility in Simonswood: What you need to know