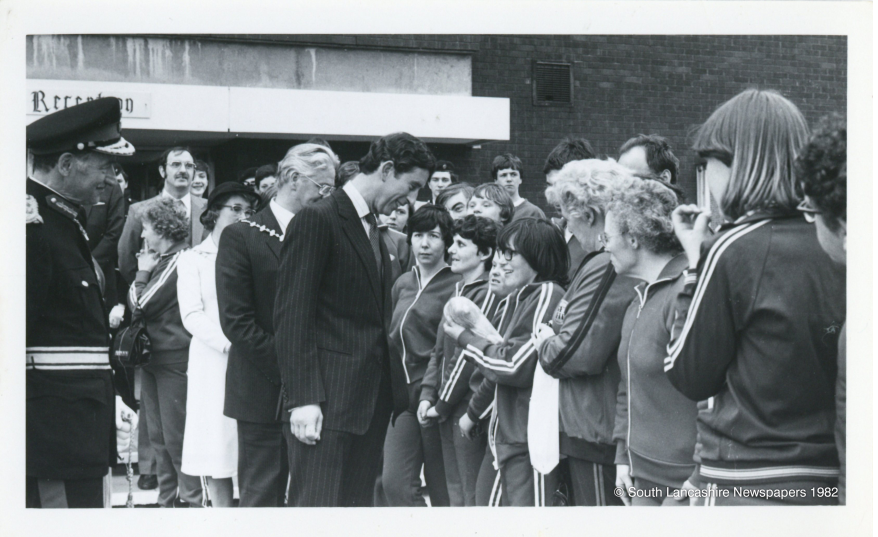 Many Knowsley adult disability service users and staff participated in this landmark event at Kirkby Sports Centre in 1982 for people with intellectual disabilities.

The games, held from Tuesday 6 to Thursday 8 July 1982, were opened by H.R.H. Princess Alexandra.

Athletes from nine regions of the UK competed alongside participants from Barbados, Greece, Netherlands and The USA.  In all, one thousand Special Olympians and escorts took part in the games with the competitors from Knowsley part of the North West team.

There were track and field events including the long jump, high jump and shot put plus wheelchair and swimming events.

Some wonderful photographs, medals, and sportswear from the great event are on display in the ARK exhibition space (in Kirkby Library) from Friday 17 August.

There are some great photographs of Knowsley competitors meeting Prince Charles during his visit to Kirkby Sports Centre in April 1982, whilst they were training there. One of the young participants presented Prince Charles with a teddy for the soon to be born Prince William.

“This year’s International Games are a step – a big step but no more than a first step – along a road that can lead us to a brighter future for mentally handicapped sport, throughout the United Kingdom.’

That was certainly the case in Knowsley as the event was the springboard for further sporting activities for the service users and for one competitor in particular; Vivienne Castell. She trained at Terry Phillips Gym in Knowsley Village and went on to take part in the Paralympics.

After the 1982 games, Vivienne represented Knowsley in many more Special Olympics games playing netball, volleyball and basketball for the North West, national, Great Britain and European teams. She then, at the age of 20, went on to compete in the Paralympic games in Barcelona and Madrid in 1992.

“It’s amazing to think it all began right here in Knowsley when the Special Olympics GB 40th Anniversary Games are happening this month!

“There are some fantastic photographs and memorabilia on display so it really is worth visiting ‘This Sporting Life’ in Kirkby Library’s exhibition space.”

The Special Olympics Great Britain (SOGB) was established in 1978 as part of the global Special Olympics Movement, with the first games held in Kirkby in 1982. It was founded by Chris Maloney MBE, who had been teaching swimming to people with learning disabilities since the early 1960s. Chris had been enlisted by Eunice Kennedy Shriver, sister of President John F Kennedy and founder of the whole movement, to develop the Special Olympics programme in the UK.

‘This Sporting Life’ is on display in the ARK exhibition space in Kirkby Library, the Kirkby Centre, from 17 August 2018 until 16 October 2018.

Packed audience for The Tempest at Knowsley Hall

Could you support Willowbrook Hospice?