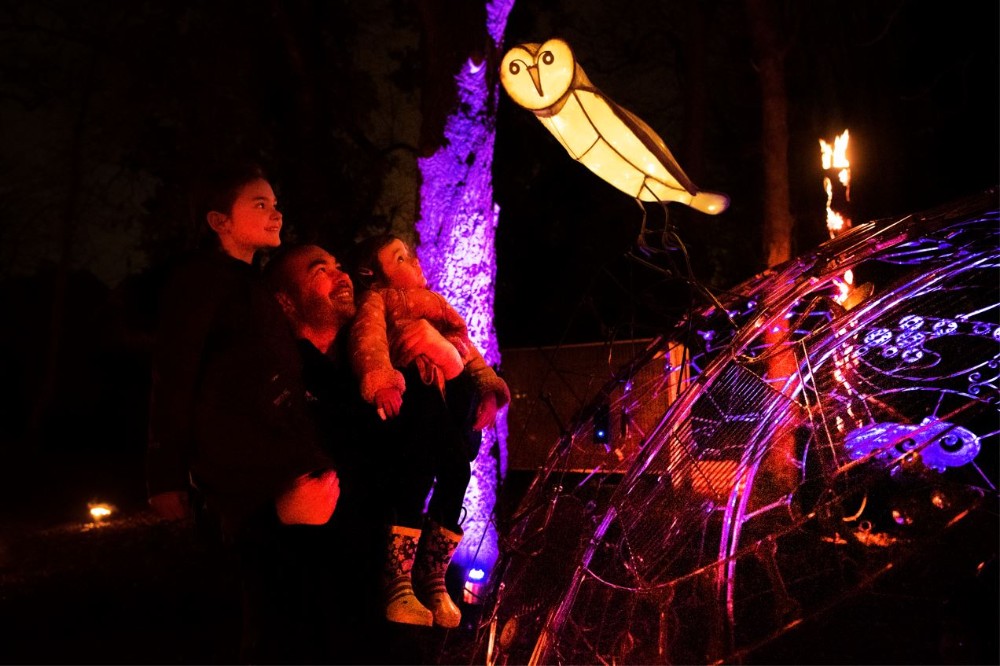 From Friday 21 – Sunday 23 January thousands of people were mesmerised by the after-dark illuminated trail that featured a host of fiery attractions; from copper flowers that breathe fire and scorching sculptural trees to performances from Bring The Fire Project, harpist Rebecca Mills and a special family performance set in giant golden birdcage.

Cllr Shelley Powell, Cabinet Member for Communities and Neighbourhoods and elected member for Halewood North said “This was an incredible one-of-a-kind event that captured the hearts and imaginations of the local community. Court Farm Woods was transformed into a magical theatre of music and light and it was fantastic to see so many people engaging with culture on their doorstep.

“This is just one of many fantastic events happening as part of Knowsley’s Borough of Culture year and I’d urge everyone to have a look online at some of the things we have coming up next. There really is something for everyone to enjoy.”

Tickets for the free event were highly sought with the first release in December selling out in a weekend and an additional release during the weekend of the event going in under an hour.

The Magic Wood was the second event in Knowsley’s year-long Borough of Culture programme, with Aqualux launching in Kirkby the previous week. Both attractions form part of ‘A New Dawn’ –  a series of moments of light across the borough. Still to come is arrival of Luke Jerram’s ‘Gaia’ to St Chad’s Church in Kirkby, an incredible, large scale community artwork which will be projected onto a tower block on Stockbridge Village, two world-class light installations in Huyton Village and a spectacular finale at Knowsley Hall.

The Magic Wood – Borough of Culture 2022

Luke Jerram’s ‘Gaia’ is an astonishing 6-metre-wide replica of the earth based on imagery and data from NASA. Suspended in the air and slowly revolving, the artwork – which will be housed in St. Chad’s Church in Kirkby – gives people a chance to see the planet, floating in three dimensions.

Tall Tales – 4 and 5 February 2022 – 6pm onwards (last showing 7.30pm) – Stockbridge Village
Tall Tales is a brand-new large-scale community artwork that will see Merecliff – a residential 16 storey tower in Stockbridge Village (adjacent to the M57 motorway) – animated and illuminated in light. The dramatic projection which will be accompanied by a soundtrack, will tell the story of local people and communities who have shared their stories captured, interpreted and exaggerated by artists Illuminos.

Submergence, created by world renowned artists Squid Soup,  is a reflective, immersive walkthrough experience that will go on display in Sherbourne Square in Huyton Village. Consisting of thousands of individual points of suspended light, visitors are encouraged to enter the artwork to experience the amazing light illusion for themselves.

Delivered by video projection artist’s Illuminos and accompanied by an atmospheric soundtrack from renowned composer Patrick Dineen the spectacular will create a unique and memorable moment for all visitors. The ballot for tickets for this event has now closed.

£3.2m pledged to support survivors of sexual violence over the next five years