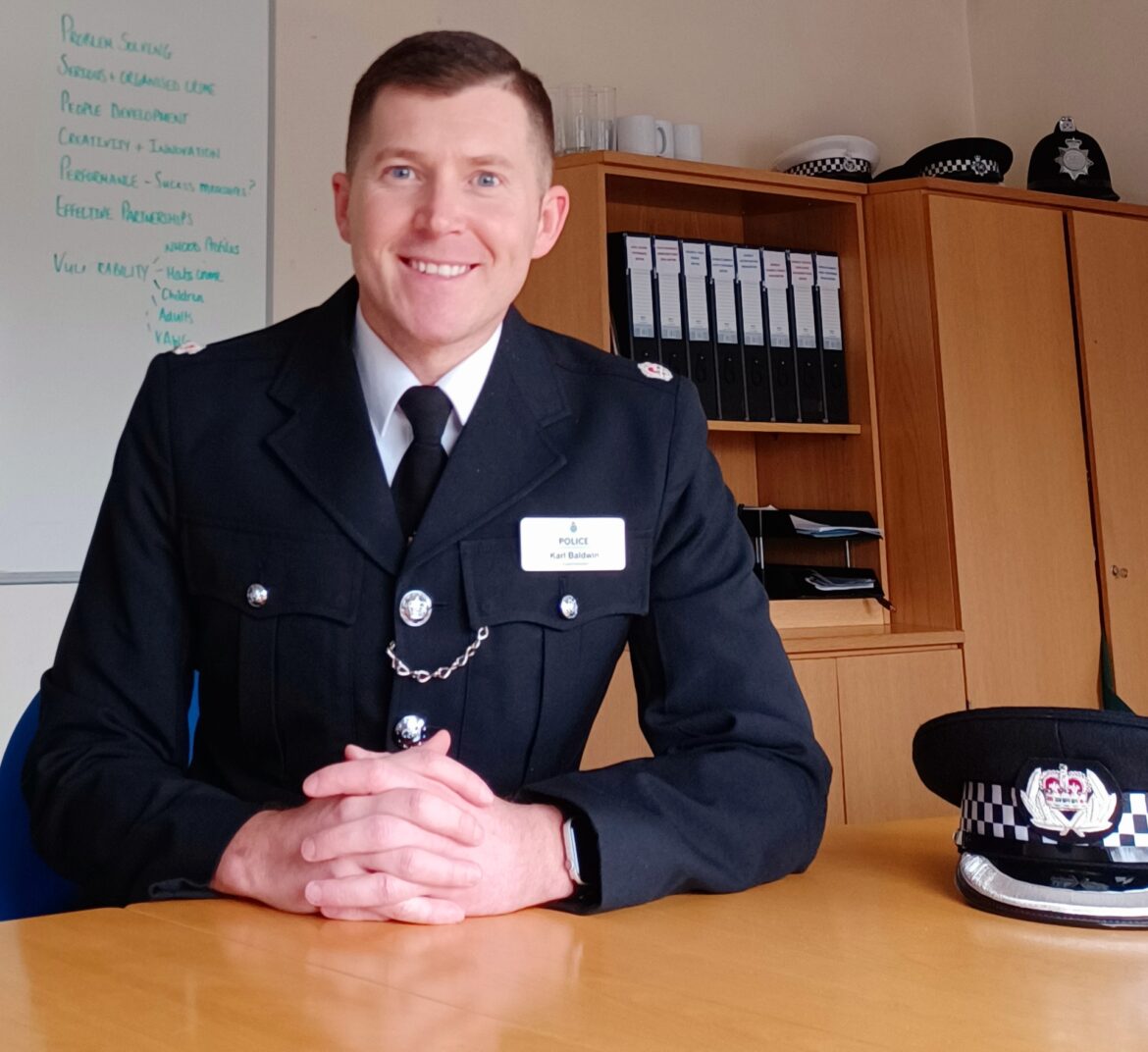 A new superintendent has been appointed to lead Knowsley’s policing team.

Here we meet Karl Baldwin, a long serving Merseyside Police officer who is passionate about using partnerships to build better and safer communities.

Superintendent Baldwin’s career started as a Constable at Eaton Road Police Station before becoming a Sergeant for the Speke area. Later he joined the Matrix Roads Policing Unit at Smithdown Lane. Progressing from Police Constable to Superintendent, Karl has worked across Merseyside in several different roles including being the Staff Officer to the former Chief Constable, Andy Cooke QPM, a role with significant responsibility, which saw him working closely with the Chief Constable, supporting him in his strategic role leading Merseyside Police. This led to Karl taking on the pivotal role as one of the Force Duty Officers – undertaking a key decision-making role and managing how incidents are responded to across Merseyside.

Karl brings a wealth of experience to lead Knowsley’s policing team from his training as a Tactical Public Order and Public Safety Commander, police negotiator and having previously worked in Knowsley as a Response Inspector in Kirkby.

Karl said: “My career to date has taken me across Merseyside, including Knowsley. During my time in Kirkby, I was able to understand the issues and concerns of residents across the borough.

“This hands-on experience of working in Knowsley has given me an insight into the issues that are affecting communities and residents here.”

“PARTNERSHIPS ARE EVRYTHING IN THIS GAME”

Karl will play a key role in the Knowsley Community Safety Partnership. Made up of organisations including Knowsley Council, Merseyside Police, Health, Probation, housing providers and Merseyside Fire and Rescue Service, they work together to address issues of community safety and find new ways to work more closely together to tackle crime and antisocial behaviour in Knowsley.

Karl continues: “During my time at Merseyside Police, I’ve learnt the power of partnership – partnerships are everything in this game. The relationships between people and organisations is critical in responding to the issues that have a negative impact on people, communities and businesses.

“There are already incredibly strong and effective partnerships in Knowsley, and I’m delighted to be joining such a committed, hardworking and dedicated team. I’ve been particularly impressed by the Crime and Communities Team, which is the existing co-location of Police Officers and Council Officers. Although relatively new, they have made a significant difference and have played a crucial role in a number of warrants we’ve executed across the borough thanks to the information and intelligence they’ve gathered.”

Karl is keen to build on the achievements of his predecessors, most recently T/Superintendent Phil Mullally, and the successes of the force’s work with partners.

Karl says: “As a partnership we have a range of powers that can help us tackle crime and anti-social behaviour. I want to further develop how we use this legislation to proactively make positive and long-term change. To begin by preventing the recurrence of ongoing problems, such as anti-social behaviour in our Town Centres, before moving on to preventing new problems developing in the first place.

Karl continues: “A key focus for me is to also better inform our residents and their elected representatives about the work we’re doing. A lot of positive work is happening, and we want people to know. By demonstrating the action we’re taking I hope people will feel confident to come to us with their concerns and know we will tackle them. Without information and intelligence from the community, we can’t build an accurate picture of what is happening on our streets. But if we understand the issues we can and will tackle them.”

Love makes the world go around