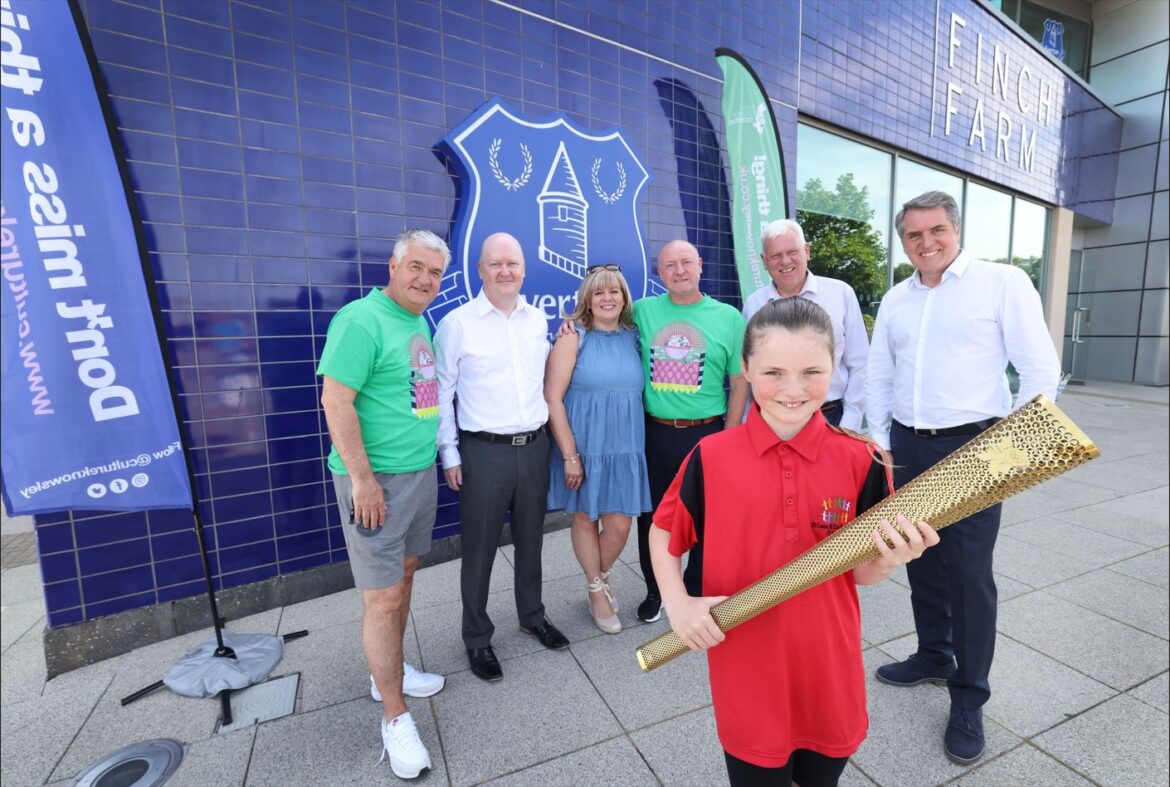 Setting off from Everton FC’s Finch Farm training ground on Monday 18 July, Steve and Ian carried the baton – an Olympic torch carried my local sporting hero Mike Dooling for the London 2012 Olympics. Ordinarily on display at the Museum of Liverpool, the torch has been loaned to Knowsley for the Sporting Relay.  Mike Dooling also joined day 1 of the relay along with local schoolgirl Layla Phillips, member of Whiston Junior football league.

Also tagging along for the first leg of the relay (and braving the heat on the hottest day of the year so far) was Liverpool City Region Metro Mayor Steve Rotheram, Cllr Graham Morgan Leader of Knowsley Council and Mike Harden, Knowsley’s Chief Executive. Addressing those gathered to witness the start of the relay local lad Steve McMahon reflected on his time growing up in Halewood and how proud and pleased he was to be part of the relay, he said:

“When I was asked to be part of this brilliant project I said yes immediately, without hesitation, and I feel really privileged to be part of this. Knowsley has such an amazing sporting heritage and some incredibly talented sporting legends hail from this part of the world – so if this event helps to inspire some of the next generation, then that would be amazing. Knowsley is where it all started for me, and I went on to play for Everton and Liverpool, which was an amazing honour.  All I would say to young people now is – it could be you next!”

After leaving Finch Farm, the group walked to Halewood Leisure Centre to meet hundreds of the borough’s youngest residents to take the Olympic Torch on a lap of the field. With sun hats on, sun cream applied and lots and lots of water, the children taking part all received a medal from the Sporting Legends and played their part in getting the relay off to a fantastic start.

The Knowsley Sporting Legends Relay will travel the length of Knowsley from Everton FC’s training ground in the south of the borough to Liverpool FC’s AXA Training Academy in the north. With support from local communities, sporting groups, local sportspeople and even the odd famous face, the relay will take in towns and villages to celebrate the importance of sport to people and communities.

The full schedule for the week is available on www.cultureknowsley.co.uk

Register your appliance for a safer home

Are you or a loved one missing out on pension credit?