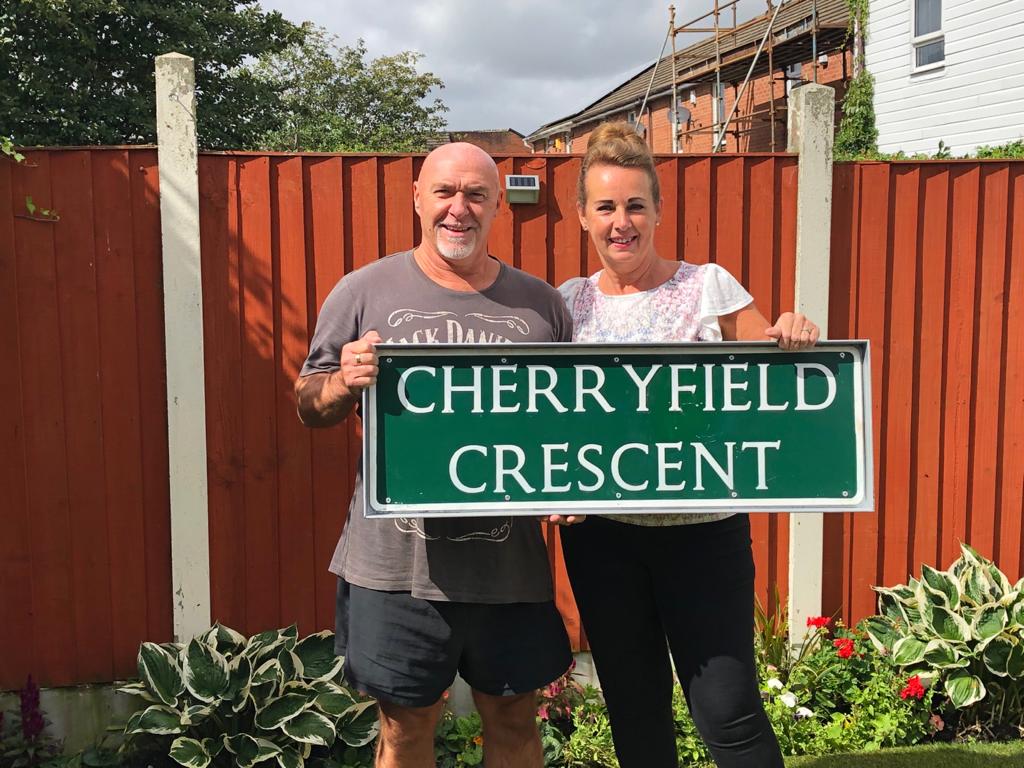 Knowsley Council’s Highways Team played their part in a local love story after helping with an unusual request.

Amanda Hughes from Kirkby was presented with the Cherryfield Crescent road signs after initially writing to her MP The Rt Hon Sir George Howarth. The road signs were being replaced as the Council’s development plans for Kirkby continue to progress.

As a teenager during the 1970s Amanda lived in the flats on Cherryfield Crescent, which have since been demolished.

Tommy, her secret admirer at the time, is now her partner and lived on neighbouring Cherryfield Drive.

After going their separate ways the pair rekindled their love two years ago through a dating app.

Amanda said: “Tommy had a crush on me when we were both 14 but was too shy to act on it. I moved with my family to Huyton when I was 16 and Tommy moved away from Kirkby to play semi-professional football. Later we both moved back to Kirkby, met our partners, married and had children. However, after divorcing, our paths once again crossed when we met through a dating app. Even after all this time, we hit it off straight away. Cherryfield Crescent holds so many fond memories for us and we are so pleased that our request for the road signs has been successful. They now have pride of place in our back garden!”

Cllr Tony Brennan, Cabinet Member for Regeneration and Economic Development, said: “We were delighted to be able to present Amanda and Tommy with the road signs. Amanda had kept it a secret from Tommy so he was genuinely shocked and delighted. They were really grateful to us and Tarmac for granting their wish.”

Knowsley Carers given a helping hand to cover cost of Covid