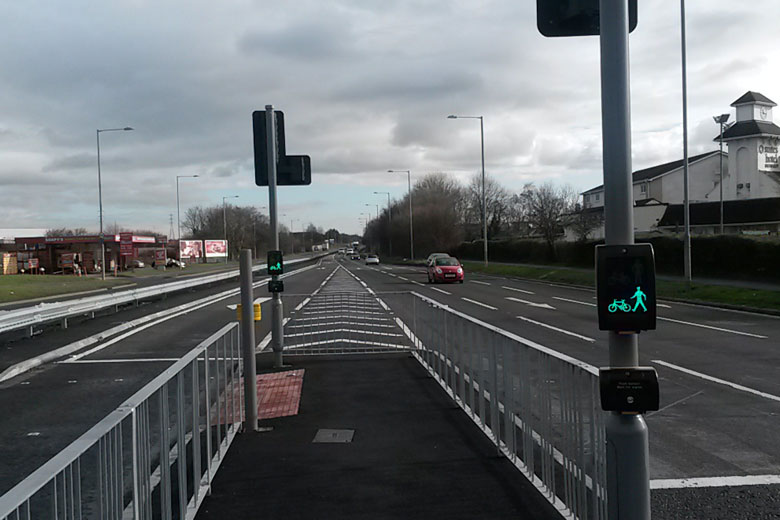 The first part of the major transport improvement work at Knowsley Business Park is now complete.

A new gateway entrance at the junction of Moss End Way and Perimeter Road has been created, making it easier for businesses, visitors and other drivers to access the Park.

A total of £6.7 million has been invested into the Knowsley Business Park Access and Connectivity Improvement scheme which is due to be complete by August 2016.

The improvements will provide clear routes and gateways for drivers to identify and access the park, more public transport and improved walking and cycling access. Creating a reliable transport network will ensure Knowsley Business Park can grow and meet future increases in demand. The other areas of work include:

Significant modifications to the road layout have made it easier for the movement of HGV’s and enhances the parks ability to attract investment from freight and logistics companies.

The existing junctions will be transformed into a gateway and public transport hub and it is hoped it will attract further retail and commercial development in the future.

Improvements to the junctions on the A580 at Coopers Lane and Moorgate Road will enable right turn movements to provide direct access to the park and reduce congestion.

The Knowsley Business Park Access and Connectivity Improvements Scheme is the first major transport initiative to be delivered in the Liverpool City Region following the devolution of funding from the Department for Transport.

Knowsley Business Park is home to some of the UK’s most successful businesses including brands like Matalan, QVC and Amazon. It is one of the largest employment areas in Europe with more than 800 businesses employing 15,000 people.