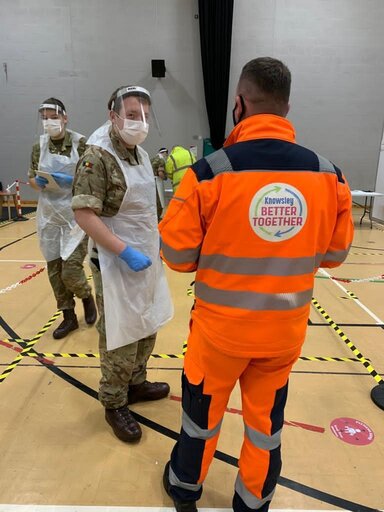 Residents get tested in Knowsley

Almost 600 residents without symptoms have been tested in the first three days of the new testing centres opening.

Testing for people who do not have symptoms went live on Tuesday 8 December at three sites at Volair Halewood, Huyton and Kirkby.

Centres are open from 9am until 6pm from Monday to Friday and from 10am until 4pm on Saturday and Sunday.

No appointment is needed.

Testing people without symptoms will identify people who have COVID so that they aren’t (unknowingly) spreading the virus in our communities.

The test is quick and easy to do and results come back in around 30 minutes. Importantly, those who test positive can then self-isolate to reduce the further spread of the virus.

“Having these facilities in Knowsley means that people who have the virus, but don’t know that they have it, can be identified and importantly, they can then self-isolate.

I did a test on Tuesday and it was so quick and easy. My result was negative but I will get a further test done in a week’s time.

In just two days, 11 people have tested positive, but importantly, they can now take steps to ensure they don’t pass on the virus to other people.

Come on Knowsley – let’s get tested!”