Partners from across the region have been implementing the NO MORE Suicide Strategy over the last five years.

In order to be recognised as a Suicide-Safer Community, there are ten main pillars of community action that must be addressed, including training, suicide bereavement, leadership and mental health promotion. These pillars are associated with most national suicide prevention strategies. Communities can assess their progression and current strengths, as well as areas for growth and improvement, as they work within their own national and local frameworks to become safer from suicide.

Sue Forster, Chair of the Cheshire & Merseyside NO MORE Suicide Partnership Board and Director of Public Health for St Helens, said: “So many people have contributed towards this prestigious accolade. I am grateful for their dedication and support. We truly have a fantastic partnership approach to suicide prevention and have achieved many things from training to awareness raising campaigns and supporting those bereaved by suicide. On behalf of the NO MORE Suicide Partnership Board I would like to thank all colleagues and partners who have helped us achieve this award. As we refresh the NO MORE Suicide strategy and action plan, we will continue to work together in our aim to reach zero suicide in Cheshire & Merseyside.”

Louise Gittins, lead elected member for Suicide Prevention in Cheshire & Merseyside and Leader of Cheshire West & Chester Council added “I am delighted to hear that Cheshire & Merseyside have received this award. I have been so impressed with the work that has been carried out to prevent suicide in our area and have seen the dedication and commitment of the Board, operational groups and partners throughout Cheshire & Merseyside. I look forward to working with colleagues in the future on this important public health issue.”

The award will be celebrated and acknowledged at the World Suicide Prevention Day webinar on 10 September.
There are a host of resources available to Knowsley residents to help prevent suicide, including The Stay Alive app. 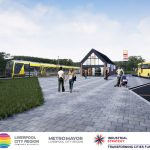