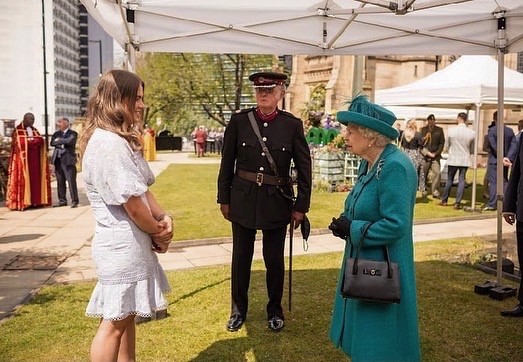 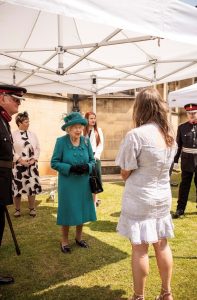 Her Majesty the Queen has thanked a Knowsley resident for her tireless work providing mental health support in the borough.

Lily Spendlove, who helped found The Lee Cooper Foundation in 2018, met the Queen at a special ceremony at Manchester Cathedral recently.

At the Cathedral was representation from Cheshire, Greater Manchester, Lancashire, Cumbria, and Merseyside.  Each Lord-Lieutenant was asked to send five people from their county to meet Her Majesty, and Lily, who recently turned 21, was nominated to represent Knowsley in recognition of her work with mental health.

Lily was just 17 when she set up the foundation following the death of her friend Lee, who tragically died from suicide. She has worked with young people in the borough ever since, running needs-based workshops to provide valuable mental health support.

On meeting the Queen, Lily said: “It was such a surreal experience. We spoke for two minutes and she was asking about the foundation and telling me the work we do is amazing and much-needed. I was 17 when I first got involved with the foundation and it has just grown and grown from there. We’re just lucky we’re able to offer this support.”

The Queen’s visit marked the 600th anniversary of the Collegiate Church of Manchester, which became a cathedral in 1847. Lily was one of five volunteers from Merseyside to attend the ceremony.

She added: “She told me she liked the name Lily. She was really lovely. I wasn’t nervous at the time, but it hit me afterwards just what had happened. It was a special day.”

Lesley Martin-Wright, who is Chief Executive of Knowsley Chamber, and a Deputy Lieutenant of Merseyside was thrilled to recommend Lily.

She said: “I immediately thought of Lily because of her exemplary work with the foundation. She is a great ambassador for Knowsley. Lily really empowers young people as part of her mental health work. She is so enthusiastic and a real asset to the borough. I think she’s had a marvellous day and it’s been richly deserved.”

To find out more about the work of The Lee Cooper Foundation and to find out how you can access mental health support, visit www.theleepcooperfoundation.co.uk

Council pushes on with improvements promised in Whiston