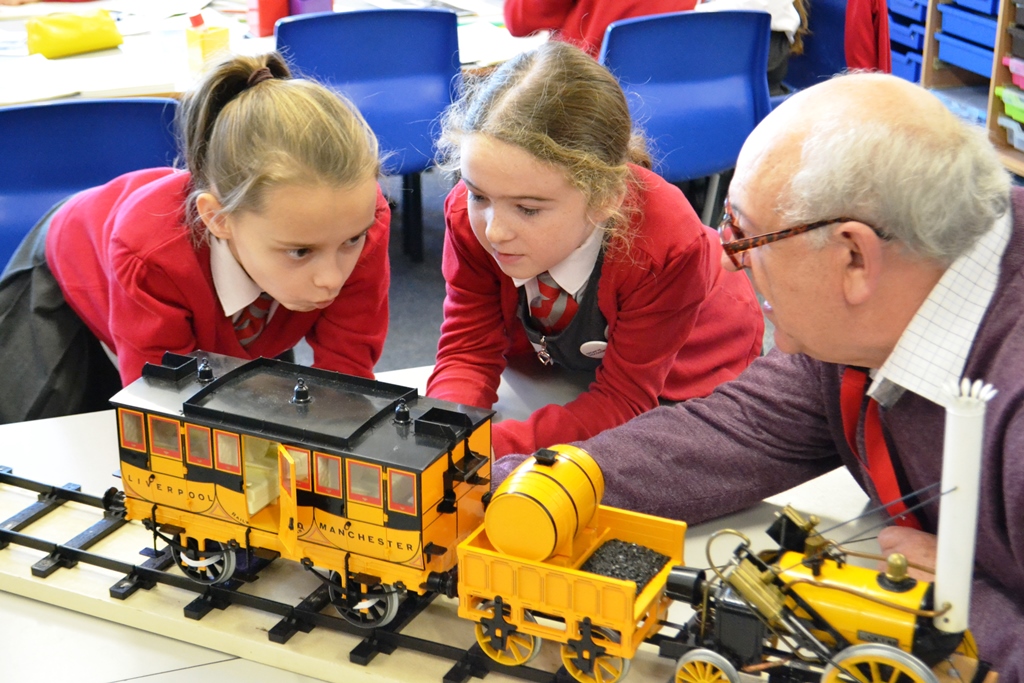 Pupils star in film uncovering events in Knowsley which changed the world!

School children in Knowsley have been on an exciting journey of discovery spanning 200 years and now they’re sharing their story in a wonderful film charting their explorations and discoveries of the opening of the world famous Liverpool to Manchester Railway (L&MR) line.

Supported by staff and volunteers from the ARK – Knowsley Council’s archive – Year 5 pupils from St Anne’s Catholic Primary School in Huyton have been finding out what happened in Huyton and Roby two hundred years ago and how it changed the world!

“It’s a story of competition, invention, money and catastrophe. Huyton and Roby are part of the story that changed the world,” say the pupils in the film.

The ARK’s ‘Chuffed to Bits’ film captures the children researching existing archive resources – including maps, photographs and official documents – and their further investigations through visits to local railway stations and railway museums. The children are also shown interviewing experts from the Liverpool to Manchester Railway Trust and members of the Rainhill and Railway Heritage Society.

These same experts, along with a local railway author and an employee from Network Rail also delivered some really engaging educational sessions to the children throughout the project.

“’Chuffed to Bits’ is a wonderful film. The children’s enthusiasm is palpable and they really bring to life the fascinating story of the world famous railway line that runs through the heart of Knowsley.

“It’s clear the children have enjoyed learning all about the opening of the Liverpool to Manchester Railway line, the impact it’s had on the local area and how it quite literally changed the world. It’s a must see for us all!” Discover the full story in Huyton Library where ‘Chuffed to Bits’ starring the pupils from St. Anne’s Catholic Primary School will be showing from Thursday 6 July until Tuesday 5 September. A bitesize version of the film is also available on the council’s youtube site.

As part of the ARK project the pupils also worked with artist Simon Grennan to design a mural for the subway at Huyton station. Once installed the colourful artwork, which has been influenced by the rich memories and thoughts about train travel and the railway line, will really brighten up the subway.

Following its showing in the library ‘Chuffed to Bits’, along with a written record of the children’s discoveries, will be housed in the ARK as a valuable learning resource for other schools and the wider community as part of the council’s Heritage Lottery Funded programme to develop the borough’s archive.