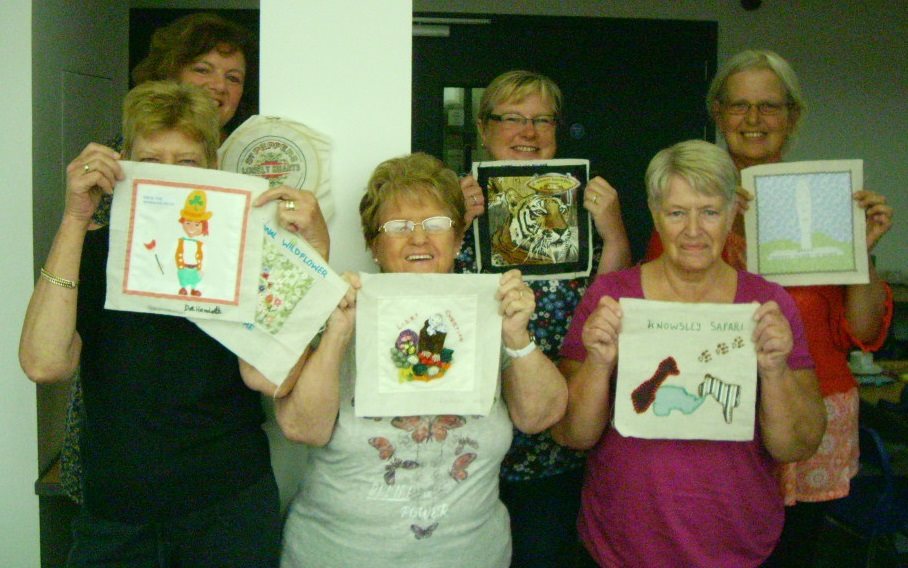 As part of the celebrations for Radio Merseyside being on air for 50 years, the station set a challenge for keen crafters across Merseyside.

Crafters were asked to create a fabric square using appliqué, embroidery or beading work. The designs had to be something relevant to Merseyside such as a scene, individual, location or building. Radio Merseyside will then select some of the squares to be sewn together to create one big celebratory banner to be displayed at the radio station.

The ladies at Prescot Library’s Craft Group took up the challenge and dived straight in to creating their little masterpieces.

Collette Shelbourne used appliqué to create a realistic looking tiger on her square. The tiger represents Knowsley Safari Park which holds plenty of fond memories for Collette as she visited a lot during her childhood. Collette also has great memories from the times she took her own children to the safari park making it somewhere she holds close to her heart.

Knowsley Safari Park was also the inspiration for Jill Evans’ work and she also used applique to design a rhino, zebra and a giraffe on her square. Jill had never tried the technique before taking part in the challenge but found she really enjoyed doing it.

Fond memories also helped Rosina Hill to decide what to create; Rosina decided to portray a local person she knew and admired called Lizzie Christian. Lizzie sold fruit and flowers from a handcart on Great Charlotte Street and Rosina’s aunty also had one on London Road so Rosina has great childhood memories surrounding handcarts in Liverpool City Centre. Rosina used the interesting embroidery technique of stumpwork to create her square.

Dot Hamlett chose to include paint in her design and painted one of Liverpool –born comedian Ken Dodd’s ‘Diddy Men’ onto her fabric. Dot said she wanted to do something a bit different for her design and it is a great way to bring attention to the much-loved local star.

The National Wildflower was given the attention it deserves by Ann Hanna who chose to use embroidery for her designs. Ann and a lot of the other ladies at the club enjoyed visiting the centre as a child so it was an ideal choice to include in one of the group’s designs.

It’s the perfect time for Angela Kitchen to do a design based on The Beatles’ Sergeant Pepper’s Lonely Heart Club Band album which she decided to do after becoming interested in all of the hype surrounding the 50th anniversary of it which is this summer. While Angela says she does mostly knitting and crochet, she gave embroidering a go which she had not done in a long time. Since doing her design, Angela has rediscovered her love for embroidery and wants to continue doing it.

We really hope the wonderful creations make it into the banner for more people to admire and appreciate the group’s work. Well done on the great work, ladies.

Prescot Library’s Craft Group is a group of around 15 creative ladies who meet up every week to socialize and get involved with all sorts of crafts. The group proves to be popular and unfortunately there is currently no room for any more craft lovers but if you’d like to be put on the waiting list, you can give Prescot Library a call on 0151 443 5101