Home In focus From ‘sausage bridge’ to iconic bridge: the story of the new M62 footbridge 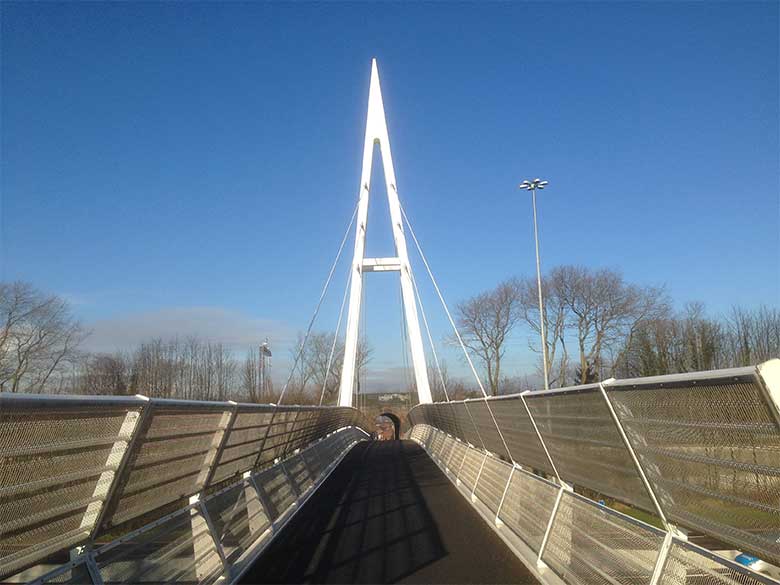 From ‘sausage bridge’ to iconic bridge: the story of the new M62 footbridge

The new Greystone footbridge provides an impressive gateway at the Knowsley and Liverpool boundary and spans the M62 between junctions 4 and 5 in Huyton.

Constructed in 2015, the iconic structure replaced the former crossing, affectionately known as ‘the Sausage bridge’. It had linked communities on both sides of the motorway for generations. It had been repaired many times over the years, but reached a point where it needed replacing.

It took 19 workers 12 hours to demolish the old bridge and a further 32 hours to remove the 100 tonnes of steel and 1,100 tonnes of rubble. The rubble was taken away for recycling and reuse in construction projects across the North West.

Installation of the new Greystone footbridge

The installation of the new cable-stayed structure took place over a weekend in August 2015. It involved more than 20,000 man hours, 100 tonnes of steel and 200 cubic metres of reinforced concrete.

In preparation for the installation, new 18 meter foundations were created in the central reservation of the motorway to support the new footbridge.

The new bridge is 3 meters wide providing a safe crossing for pedestrians and cyclists and is used by more than 400 people each day. The bridge is illuminated in the evenings and the central prism provides an impressive gateway into Knowsley and the City Region.

It was officially opened by The Mayor of Knowsley Cllr Edna Finneran in November 2015.

Spot the signs to protect adults from abuse