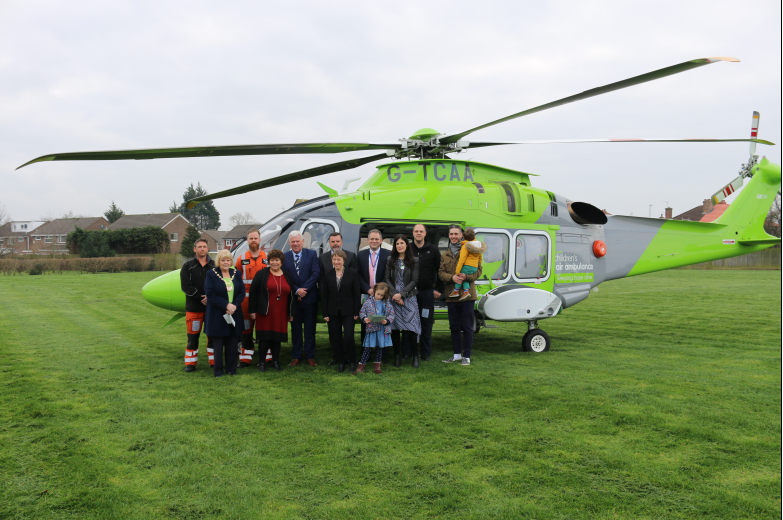 There was a special arrival at Halewood Academy School when the national Children’s Air Ambulance (TCAA) charity landed one of its new helicopters on the school’s sports field.

The event showcased one of two new helicopters; the only flying intensive care units in the country dedicated to transferring critically ill children and babies from local hospitals to specialist paediatric treatment centres, such as Alder Hey Children’s Hospital.

A special visitor on the day was six-year-old Bella Saker, who was one of the first children to use the Children’s Air Ambulance service when she needed open heart surgery aged six months old.

TCAA CEO, Andy Williamson, said: “On behalf of The Children’s Air Ambulance, I am delighted to have the opportunity to unveil the new state of the art Agusta 169 Helicopter with its custom designed clinical fit to the people of Merseyside. This aircraft will serve critically ill children in the region and across the UK, to help save many lives.

“Here in Merseyside, we work closely with the NWTS (North West and North Wales Paediatric Service) team and clinical partners at Alder Hey who now have the benefit of a full-time, dedicated, fast transfer and retrieval service by air provided free of charge. I hope the good people of Merseyside will see the benefit and support our work.”

Visitors learnt about the bespoke equipment on board the aircraft and about the partnership TCAA is building with Knowsley Council academies to support education and students in areas such as first aid, science and care.

Speaking at the event on behalf of Halewood Academy, Executive Principal Gary Evans said: “I am delighted that Halewood Academy has been chosen to host the Children’s Air Ambulance today.  It is a real privilege to welcome the staff and guests into school.

“It has been wonderful to see the students from local primary schools join students from the Academy to celebrate the launch of the Children’s Ambassador Club. We are really looking forward to working more with the service in the future as it will provide our students with a host of opportunities.”

Cllr Graham Morgan, the Leader of Knowsley Council, said: “It was fantastic to be a part of this event today, The Children’s Air Ambulance do an incredible job helping to save the lives of children and babies all over the country including right here, in Knowsley.”

Anyone wishing to find out more about the lifesaving work of the charity can call 0300 3045 999 or visit www.childrensairambulance.org.uk

Could you join the Police and Crime Panel?