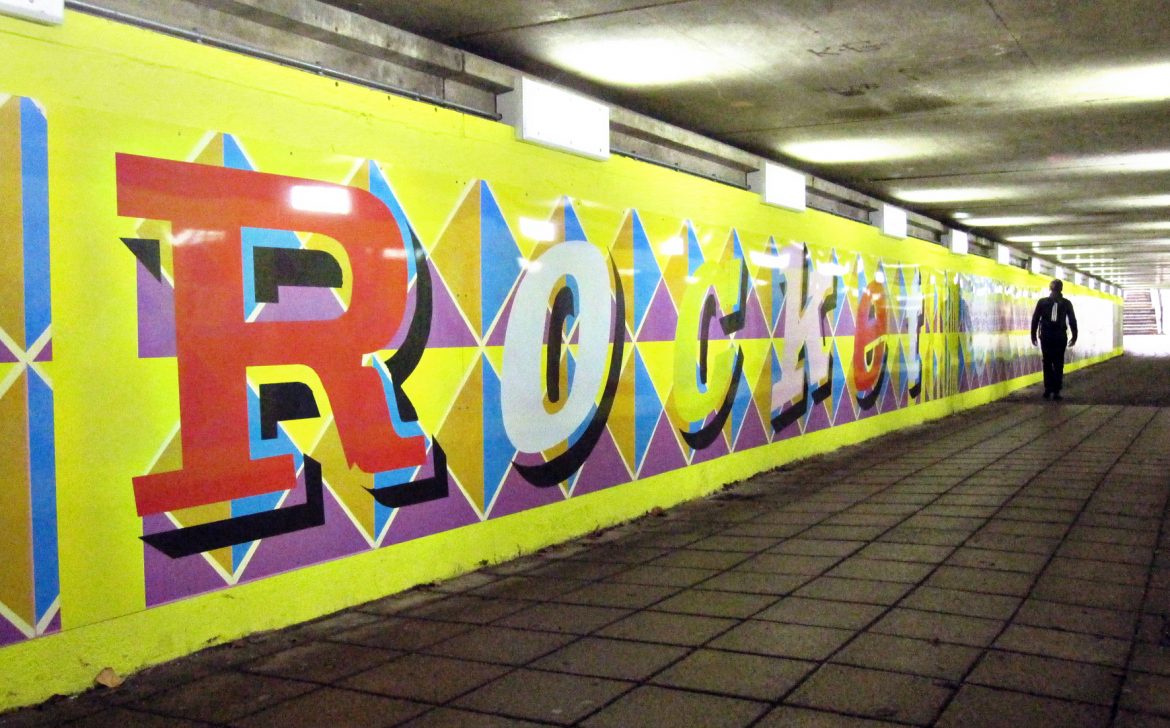 Huyton’s enviable location on the Liverpool to Manchester rail line has long since been celebrated not only for its fascinating history but also for its role in boosting the appeal of the town as a great place to live and work.

From this week, thousands of people passing through the Huyton train station subway each day will be able to view a fascinating piece of new artwork celebrating the town’s railway heritage. Located in the subway beneath the train station, the new art has been developed with input from the local community and schools through a range of engagement events that took place last year.

It shows connections between residents’ personal experiences of Huyton village and the history of the railway, highlighting Huyton’s key location on the Liverpool to Manchester rail line.

The design has been installed on either side of the subway, displayed as a rhythmic sequence and shown as a beat that you can follow whilst you walk through the subway. The bright, colourful panels reflect and display people’s experiences and memories of the railway, along with journeys they have travelled.

The project has been led by artists Simon Grennan and Christopher Sperandio, working alongside Knowsley Council, Network Rail and Merseytravel.

Cllr Andy Moorhead, Leader of Knowsley Council, said “I’m delighted to see this community project come to fruition and the artwork will really brighten up the subway, creating exactly the type of warm welcome we want people to feel when they visit Huyton.”

Throughout the engagement events which took place last year, key phrases reflected Huyton’s railway heritage were captured and have been incorporated into the new artwork.  These include ‘The Rocket’ – highlighting the most famous train to travel the line, the ‘white heat of technology’ – referencing Harold Wilson’s speech and the year 1830 – the date the line opened.

This latest project supports the Council’s wider aspiration to encourage additional development and investment into the town to provide modern living and working areas, as well as an improved retail offer. Huyton train station has recently benefitted from significant developments carried out by Network Rail, including an additional rail line and improvements to the station.

Roy Greenhalgh, Customer Account Manager at Network Rail, said “It has been fantastic to work with Knowsley Council, Merseytravel and artists Simon Grennan and Christopher Sperandio to add this exciting new piece of artwork to our subway. Huyton is rich in railway history and this is a really fitting way to celebrate this. Completed last year, Huyton station has more recently benefited from new lifts, information screens, a new platform and installation of a fourth track line. The additional fourth track allows intercity services to overtake local stopping services, enabling faster journeys on the route and new lifts have made the station fully accessible for the very first time.”

Cllr Gordon Friel, Lead Member for Rail on The Combined Authority Transport Committee, which oversees the work of Merseytravel, added “This fantastic piece of artwork is a great tribute to the local community and the rich railway heritage of Huyton and the wider Liverpool city region.

“The investment that has gone into Huyton station over the last couple of years is testament to the commitment that the city region has to the town and with improved accessibility and more trains stopping there, we hope to see even more people using the station in the future.”

On the agenda at Cabinet on 28 February