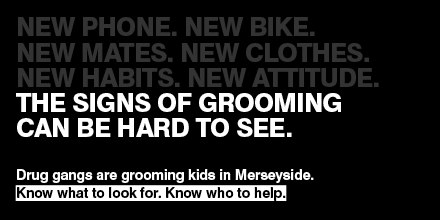 Today Merseyside’s Violence Reduction Partnership has launched a campaign that’s asking the public to keep their ‘EYES OPEN’ to the signs of drug gangs grooming our region’s children, and if you see, hear or suspect anything to report it anonymously to Crimestoppers.

Drug gangs abuse children as young as 10; and do so by making them increasingly vulnerable, often buying the targeted young people gifts of clothes, food and bikes making them feel in debt to them but also making them feel part of the gang, or ‘family’.

Once groomed, the children are sent away to other parts of the UK to sell their drugs, often hundreds of miles away from home. They can go missing from homes and schools for weeks at a time.

The ‘EYES OPEN’ campaign has been driven by the rising numbers of children, from all sorts of backgrounds, being abused by drug gangs in an attempt to hide criminal activity. They choose children because they are easy to manipulate and exploit and they are less likely to be stopped by the police saving drug gang members from being caught and reducing the risk of conviction.

Posters and billboards will go up around Merseyside, including Knowsley, saying: “Know what to look for. Know who to help,” which will explain the signs of grooming that people need to look for and the real experiences from a child’s point of view.

“As a member of the Violence Reduction Partnership, Knowsley Council is pleased to support this powerful campaign. As a local authority we have multiple responsibilities in this particular area; to work with the Police to target and tackle the perpetrators of child grooming while also safeguarding children at risk of or being used in county lines. We can’t work in isolation and need communities to understand the signs and feel empowered to report it – together we can protect our children and help build safer communities.”

People can report behaviour or activity that looks or sounds like grooming to Crimestoppers; it is 100% anonymous. Report online: www.crimestoppers-uk.org or on the phone: 0800 555 111. Or, they can speak confidentially to the NSPCC for advice or guidance on 0808 800 500 or online: www.nspcc.org.uk

Superintendent Mark Wiggins, who heads up Merseyside’s Violence Reduction Partnership, which has produced this campaign said:

“It’s time we saw drug gangs for the abusers they are. Drug gangs are grooming kids in Merseyside every day. Grown men, and sometimes women, are grooming vulnerable kids who come from all sorts of backgrounds. They are coercing them to sell drugs, to be on the end of a phone line 24 hours a day to deliver drug orders, to store firearms and weapons, and to invade vulnerable people’s homes often hundreds of miles away from their homes to help the gangs make money.

“Merseyside’s Violence Reduction Partnership, in conjunction with a number of key partners such as Merseyside Police, local authorities and schools, are asking everyone, whether a parent or not, to step up and know what the signs of grooming are. The ‘EYES OPEN’ campaign lists the signs of grooming so everyone can start to look out for the abuse and report it anonymously to Crimestoppers. We have also produced a booklet for schools to help kids understand what to look for. This depraved criminal behaviour has to stop.” 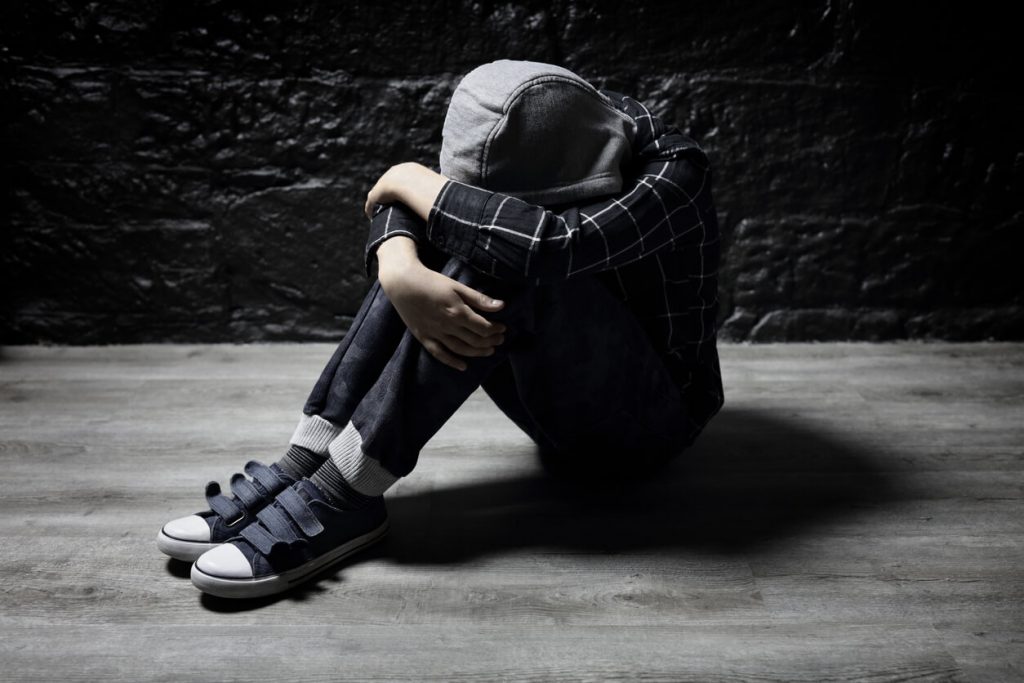 ‘Jason’, now in his 30s, was a former drug runner at 15 when he was addicted to heroin and recognises that he was exploited by drug gangs.

“You’re getting attention and love but not in the right way. As a confused, vulnerable child who was heavily addicted, I didn’t know what true love or care was.  So I’d rather have that kind of love and care than none at all.  It sounds bizarre now, but that’s what I was longing for as a kid.

“So when there’s people offering you large amounts of drugs and money, it’s quite attractive to get into that. You’re probably sold the lie that, ‘we care about you, you’re one of us, we’ll look after you’.”

‘Laura’, a Merseyside mum who has first-hand experience of having a son be groomed by drugs gangs knows what the signs are but acknowledges that she didn’t understand what was happening before it was too late:

“Initially, it was finding money that was unaccounted for, because he was only 13 … the next thing was finding a mobile phone, typically a Nokia throwaway – it was found under his mattress. He was making excuses, saying it belonged to somebody, one of his friends, and that he’d left it in his pocket and he was going to give it back to him and things just didn’t seem to add up.

“He was staying out late and not coming home or at his usual time. Also, not answering his own phone. Obviously now I know why. So they were like the first signs. But I couldn’t piece it all together, so I didn’t know what it was showing me at that time.

“It was only, unfortunately, when he was found in a drug house with cocaine and heroin, and and the police contacted me to say he’d been arrested, that I finally found out the truth.”

Local businesses: We’re all in this together