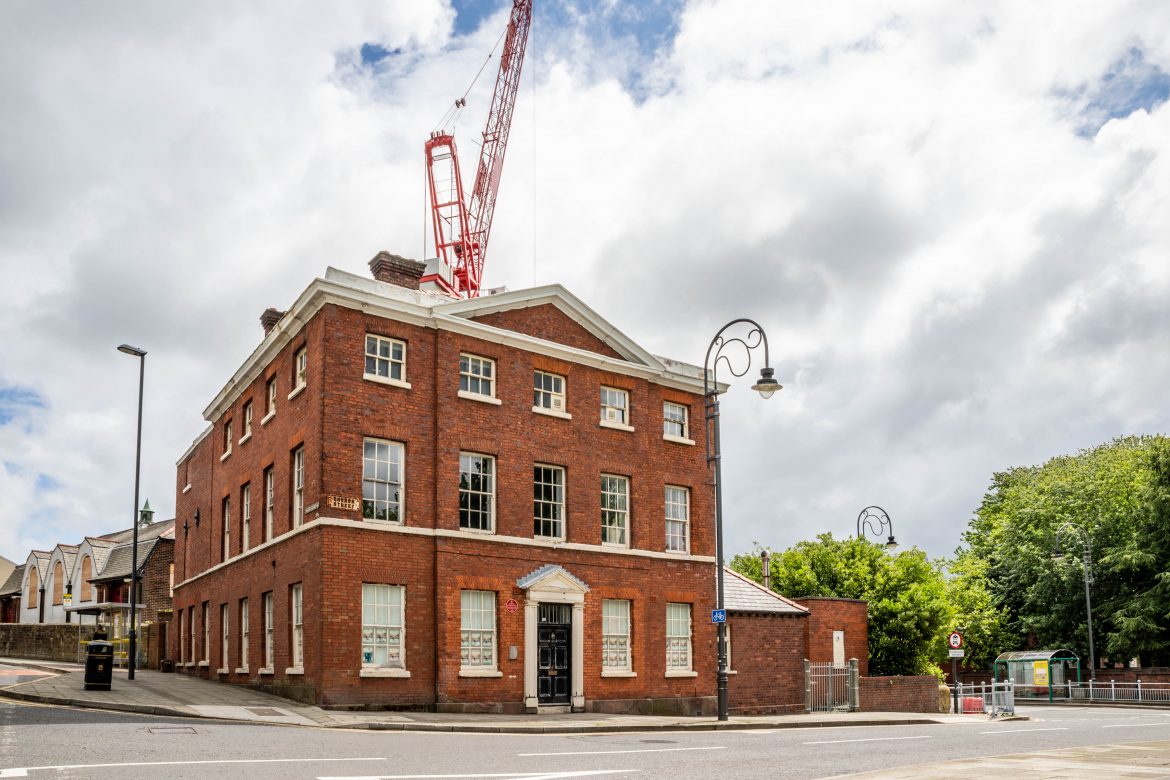 Plans for a new creative managed workspace at Cockpit House in Prescot have taken a major step forward.

Specialist conservation-accredited architects, Purcell, have been appointed to lead on the external repair and restoration of the Grade II listed building.

The revamp will enable the building to be brought back into use as a managed workspace for creative, maker, craft and digital industries as part of the overall regeneration of Prescot Town Centre. It will link closely and complement its new neighbour, The Shakespeare North Playhouse as a destination for visitors, and hosting a thriving community of small creative businesses.

The late 18th century building is a key part of Knowsley Council’s planned cultural and leisure town centre offer and will complement The Shakespeare North Playhouse and the soon to be regenerated Prescot Picture Palace on Kemble Street, adding further diversity to Prescot and helping to establish itself as a cultural hub and leisure destination.

It is all part of Prescot’s Heritage High Street Heritage Action Zone initiative which is bringing buildings and areas back into use and delivering cultural activities to help restore the local history and character of the town.

Alongside the physical revamp of the building, there will be an opportunity for an operator to manage the creative workspace. This opportunity is expected to be advertised in summer 2021.

Councillor Tony Brennan, Knowsley’s Cabinet Member for Regeneration and Economic Development said: “Cockpit House is such an interesting building, with a fascinating past and origins. I’m delighted to see plans moving forward to bring the building back into use and develop it into a space that can be used creatively. Our local community is well known for being creative so I am sure this will be well received and a huge success.

“It is wonderful to see another part of our ambitious regeneration plans for Prescot coming to fruition.”

Damien Woolliscroft, Senior Conservation Architect, Purcell commented: “We are delighted to be appointed by Knowsley Council to lead the conservation fabric repairs to Cockpit House, one of the key buildings within Knowsley’s HSHAZ programme.  The external repair works will be completed in line with Historic England’s Conservation Principles and will secure the building’s future in preparation for the internal Phase 02 works.”

Cockpit House, 34 Church Street, was built in 1774, as a particularly large and grand local example of a townhouse in what was one of the higher status areas of Prescot on the fringe of the medieval town. The building of 1774 replaced an earlier Cockpit house on the site. The name refers to there being a cockpit – a venue for cockfights and the associated gambling – on the site during the medieval and early modern periods.  The cockpit drew in gamblers from far and wide and was one of very few in Lancashire and was part of the attractions during the town’s fayres. Research suggests that a 16th century cockpit constructed of either stone timber, was located in the curtilage of the house. This means the cockpit will have existed at the same time as the Playhouse in Prescot, built in the 1590s and the earliest example of its kind outside of London.

The Cockpit House was converted from a house into a bank in 1869, as a branch of the Warrington based Parr’s Banking Company, with the ground floor converted to a banking hall with two large walk-in safes, and the upper floors possibly used as the managers accommodation or more probably offices and a caretaker’s flat. Parr’s Bank gained important acquisitions of other banks in London and the Midlands before a further merger in the mid-20th century led to the formation of the modern-day National Westminster Bank. The NatWest bank moved to a purpose-building on Eccleston Street around 1980.

In 1982 the building was opened as the Prescot Museum, which later moved location into the Prescot Centre in 2010. The building was designated as a Grade II Listed Building in 1984 due to its special architectural and historic interest.

About the restoration work

Manchester based Purcell are the lead consultants on the project and will undertake the design and specification for the external repair and restoration of the building as part of the first phase of works to the building. Purcell will work in partnership with conservation accredited structural engineers Blackett-Ord Conservation , and quantity surveyors Cavendish Bloor. The works are joint funded by Knowsley Council and Historic England.

Prescot was selected as one of the 68 high streets to benefit from the High Streets Heritage Action Zone scheme in 2020. The £3.1 million heritage-led regeneration programme will see major investment from Knowsley Council and Historic England into a number of key projects in Prescot town centre.

This includes the restoration and reuse of the former Prescot Picture Palace on Kemble Street, masterplanning of the vacant Kemble Street/Sewell Street site, and the grant aiding of privately owned buildings centred on Market Place and Eccleston Street.

In addition to this, the local HSHAZ Cultural Programme will soon get underway to bring various groups in and around the town together to help celebrate the rich heritage of Prescot, together with the HSHAZ national commission ‘Picturing England’s High Streets’