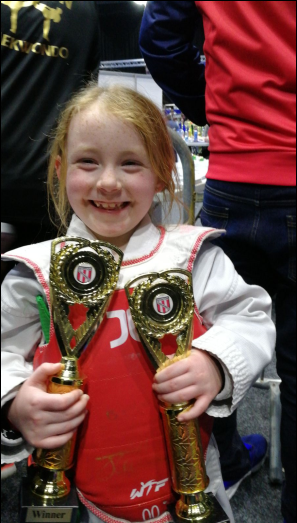 She may be small but seven-year-old Saphia Tinsley, who trains with Whiston Takewondo Club, wins big! Saphia is the proud owner of two gold trophies after winning in the Scorpion one-to-one taekwondo competition in Barnsley.

In her first fight at the competition, Saphia connected a three-point headshot in the last few seconds and secured herself a 13-11 win. In her next fight, Saphia’s brilliant performance in it was undeniable and she came away victorious with an incredible result of 23-2.

The pint size fighter trains four times a week while balancing school life in Prescot, and her hard work and dedication pays off when it’s time to get on the mat to compete. Saphia’s coach, Dave, and mum, Adele, couldn’t be more proud of her talent and achievements.

Well done, Saphia. We hope to hear more about your successes in the future.

Young people in Knowsley are no stranger to success in taekwondo – read about the other local people who have made a mark in the martial art.

On the agenda at Council on Wednesday 7 March