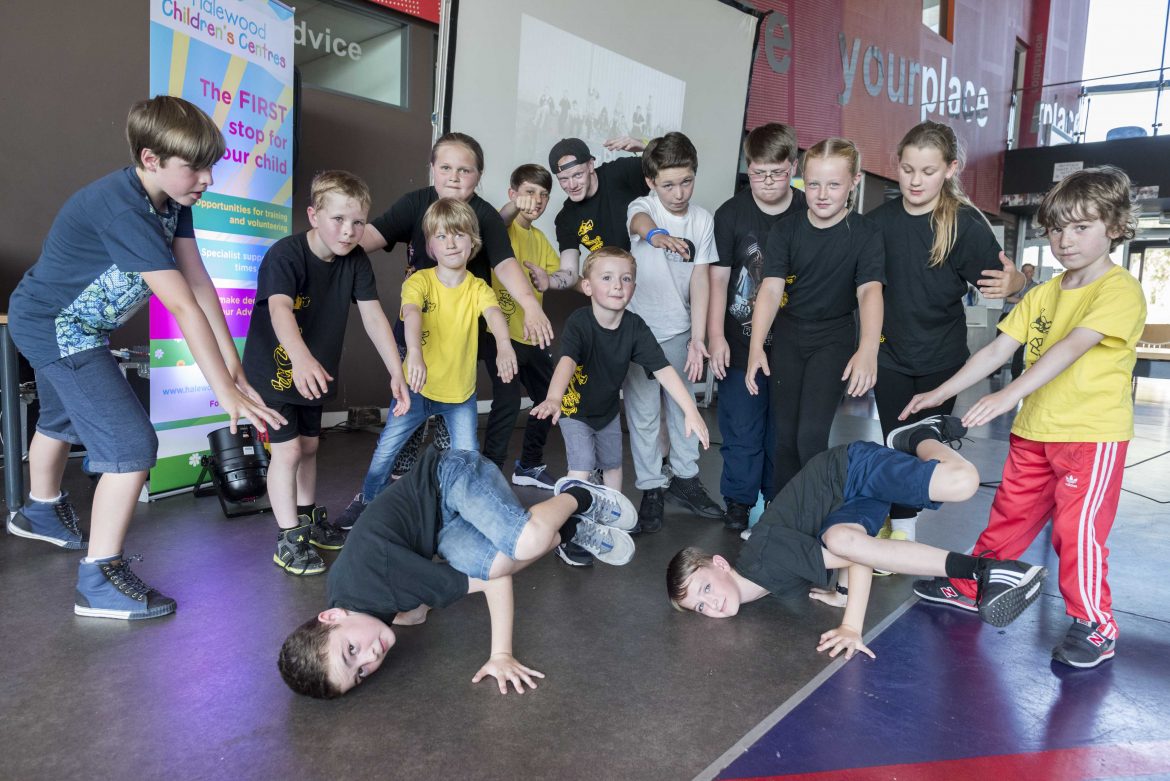 Unique activities are proving popular among local young people thanks to an imaginative year-long project allowing them to broaden their horizons and try new experiences.

Breaking the Mould was a result of a consultation between local children, young people and families about the activities they would like to be available in their local community. The aim of the project was to bring children and young people from the local communities together to participate in unique activities that they would not usually have the opportunity to take part in, such as breakdancing and using different forms of multimedia.

A spot of breakdancing during the event

To celebrate the success of the project. which brought more than 120 children and young people ranging from the ages of three to 13 together, an event took place in July which allowed those involved in the project to be awarded for their participation. The children and young people received a certificate for their involvement as well as a DVD to take home to remember what they did.

Children, families, partners and funders of the event all enjoyed an impressive evening that involved dance performances and battles. It was a great end to a one of a kind year in Knowsley!

The event proved to be a success

The great work of Family Voices and the children’s centres is not over and it is now possible for children to continue having the opportunity to participate in breakdancing sessions across Knowsley.

Breaking dancing sessions are held at Tesco Community Space in Prescot every Tuesday at 5.15 to 6.15pm for four to seven-year olds and at 6.30 to 7.30pm for seven to 13-year-olds.

At Southmead Children’s Centre, there are sessions every Thursday at 5.30 to 6.30pm for six to 13-year-olds.

The sessions have now extended to Halewood and four to 13-year-olds can get involved in the fun every Friday from 5.30 to 6.30pm at Halewood Leisure Centre.

Family Voices and the children centres are also taking extra steps in finding further interest in urban art among the community.

Following the success of the Breaking the Mould celebration event, there will now be a dance showcase at their annual Phoenix Night Event which will be held on Friday, 28 October at Bryer Road, Prescot from 5 to 9pm. The dance showcase and workshops will take place at Bryer Road Community Centre on the night. The event will give other children the opportunity to take part in workshops which will give them a taste of what to expect in the sessions that are taking part in the community on a weekly basis.

For further information about breakdancing sessions or the annual Phoenix Night Event, you can speak to one of the organisers on 0151 443 4531/2191.

Big smiles from those involved in the project

Breaking the Mould was only made possible due to local funders such as Knowsley Council, Cash for Kids, Liverpool One, High Sheriffs Fund and Police Property Act. Family Voices and the children’s centres involved thank all of the funders for their generosity and support.

“Easier, faster” transport links thanks to A5300 improvements

Want to be more active but not sure where to start?