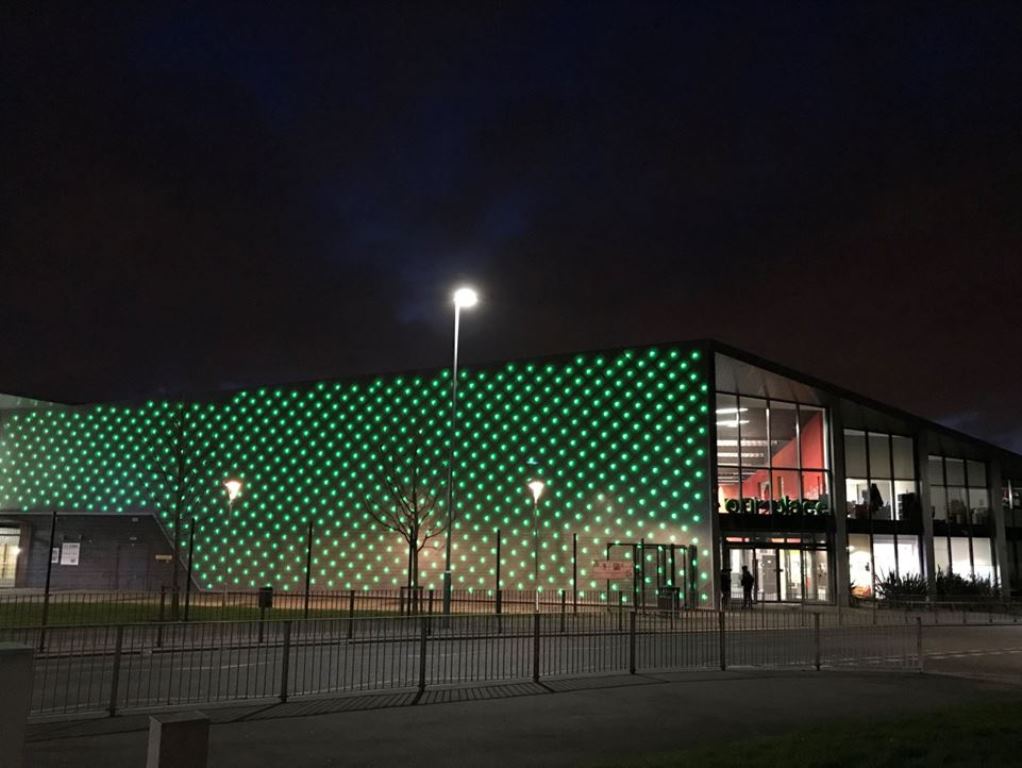 The Greystone Footbridge and Knowsley Youth Mutual were once again lit up in green to show Knowsley’s support for The Clatterbridge Cancer Charity in February.

‘Let’s Go Green’ is part of an appeal by the charity to raise £15 million towards the building of a new dedicated cancer hospital in the heart of Liverpool, as well as improvements to the Wirral site, transforming cancer care for the people of Merseyside and beyond.

The campaign encouraged everyone to ‘go green’ between 3 and 11 February 2018 and build on the success of the previous year’s inaugural ‘Go Green’ fundraising drive.

For the second year, the Greystone Footbridge over the M62 motorway and Knowsley Youth Mutual were one of many landmarks in the region turning green to mark the occasion, alongside the likes of Liverpool’s famous Cunard Building.

About Go Green for Clatterbridge

“We’re delighted to support Clatterbridge with their appeal for a new dedicated cancer hospital and encouarge others to get behind the campaign.

“Sadly cancer touches the lives of many people in Knowsley and the wider region but the earlier cancer is diagnosed, the better the outlook. It’s really important to attend cancer screening appointments such as breast and cervical cancer when you’re invited and also return your bowel screening kit

“Believe it or not, over half of people in Knowsley didn’t return their bowel screening kit and around one in three women didn’t attend for breast screening in recent years. These simple actions can save lives.

“We can also make a big difference by getting any symptoms checked-out early and making small lifestyle changes, such as getting more physically active, eating a healthier diet, cutting down on alcohol, stopping smoking and staying safe in the sun to reduce our cancer risk.”

“One in two of us will develop cancer over our lifetime so this new hospital is vitally important for the people of Cheshire, Merseyside and the surrounding areas.”

You can show your support for the campaign by posting your ‘go green’ photos on twitter using the hashtag #letsgogreen. You can also text CURE to 70111 to make a donation of £4.

If you would like to request a free ‘go green’ fundraising pack call 0151 556 5566 or visit The Clatterbridge website. Stay well with a visit to your local pharmacy