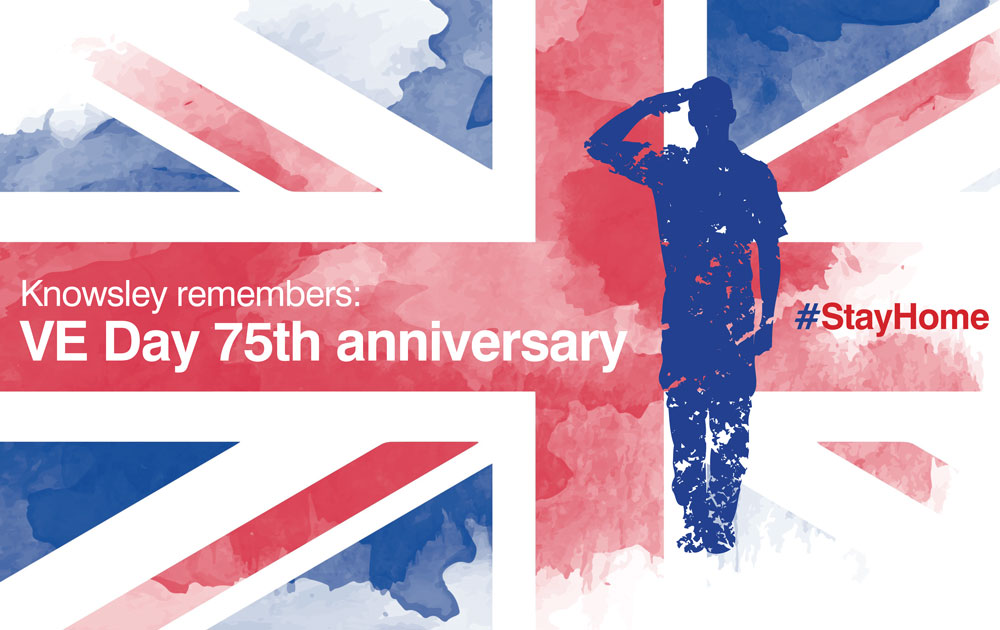 This Friday, the nation is being invited to celebrate the 75th anniversary of VE Day – when victory in Europe was declared in World War 2.

Sadly, mass public events that had been due to take place are now unable to go ahead due to Covid-19 outbreak and the social distancing rules in place.

However, the national spirit has not been dampened and across the country people are planning to celebrate and mark this important historical anniversary in different ways – still remaining safe, at home.

How can I join in with VE Day celebrations in Knowsley?

There are loads of ways you can take part. You could decorate your house and garden with WW2 inspired bunting and flags. If you can’t buy decorations, why not try making your own, in the very WW2 inspired style of ‘make do and mend’? There are templates to download and print on the Government’s VE Day Website, and a how to guide for Great British Bunting on the BBC website. Culture Liverpool also have various VE Day activities, including a playlist, dance moves and bunting templates on their website, too.

Or, you could just let your creativity flow!

Throughout the day – which has been made a bank holiday so that as many of us can mark the occasion as possible – there is a national timetable of events for us all to enjoy.

11am: The official commemorations will begin with a national moment of remembrance and a two minute silence.

2.45pm: BBC One will broadcast Sir Winston Churchill’s victory speech, which 75 years ago marked the moment peace in Europe was announced.

3pm: Following the speech, we are all invited to join in with the ‘Nation’s Toast to the Heroes of WW2’.Simply raise a glass or mug at home with the toast: “To those who gave so much, we thank you.”

9pm: Her Majesty The Queen will send a message to the nation at 9pm, the exact moment her father, King George VI, gave a radio address in 1945. This will be broadcast live on BBC One.

9:10pm: Join your neighbours on your doorstep to take part in the national singalong of Dame Vera Lynn’s ‘We’ll Meet Again’.

Join in on social media

Across the country, people will be sharing their stay-at-home VE Day celebrations. Join in by sharing photos and videos of what you are doing using the hashtag #VEDay75 – include #Knowsley as well and Knowsley Council will retweet the best!

Take part in a virtual parade

Current and former service personnel are being invited to take part in a ‘virtual parade’, in uniform if possible, to mark the minute’s silence at 11am. Photographs and video of you doing so can be shared on social media using the hashtags #VirtualParade and #Knowsley so that others can see.

As well as this, solo buglers/trumpeters/cornet players are being encouraged to play the Last Post at 2.55pm from the safety of their homes, along with the Pipers undertaking Battle’s O’er and VE 75 years at 3pm local time in the country they are in, as well as Town Criers, Crying out for Peace at 6.55pm in a similar way too. Here in Knowsley, Reverend Jeremy Fagan, from Kirkby, will be joining in from his home. Jeremy usually plays the trumpet for Kirkby’s Remembrance Day Parade, and plans to play The Last Post live on the parish’s Facebook page at 2.55pm. You can watch it here.

Cllr Tony Brennan, Knowsley Council’s portfolio holder for Regeneration and Economic Development and also Member Champion for the Armed Forces, said: “It is a terrible shame that we aren’t able to come together as a nation for the huge public celebrations that were planned for this most important historical anniversary. The bravery and sacrifice of all those who served, or simply lived through WW2 is a lesson for us all and their endurance deserves to be celebrated and remembered.

“But whilst we may not be able to come together in person, there is a strong spirit amongst people in Knowsley, and across the nation, that this day will not go unmarked.

“So, however you wish to mark this 75th anniversary of VE Day, please take the time to consider the significance of the anniversary, the sacrifices made and lives lost – and let’s all get as creative as we can celebrating that incredible generation of men and women, who fought for our freedom.”

For anyone interested in finding out more about VE Day, the Imperial War Museums Victory Hub features fascinating content about the events of the summer of 1945 and beyond, including personal recollections of VE Day and details of IWM’s Voices of War VE Day soundscape.

As well as those activities detailed in the national timetable above, there is also the opportunity to learn to ‘Lindy Hop’, Jitterbug and Jive – all popular wartime crazes. You can even find out how to give yourself a WW2 inspired make-over! There are more details on this and more activities on the Government’s VE Day website.

You’ll also find lots of information on the English Heritage website – including ‘9 Things You Should Know about VE Day’, real life stories, pictures and videos.

People in Knowsley are already planning their celebrations

Age is no barrier to celebrating VE Day – as the mums and babies at Baby Sensory South Liverpool know! The group have been meeting virtually since lockdown and will be holding a special online class this Saturday with grandparents and other relatives invited to join in, too. The parents have been making Union Jack flags and plan to take part in a virtual picnic to commemorate the heroes of WW2. New parents are always welcome to join the group, and more information about how to do this is available on their website. Right now, Baby Sensory South Liverpool are donating £1 from every new booking to the NHS, too.

Let us know what you’re doing

If you have a great idea about how to mark VE Day in Knowsley, whilst still complying with social distancing and lockdown requirements, we’d love to hear from you. Maybe your neighbourhood is really getting into the spirit of the occasion and you’d like to tell us about the sense of community spirit? Let us know by emailing communications@knowsley.gov.uk

Sewing group do it ‘for the love of scrubs’!