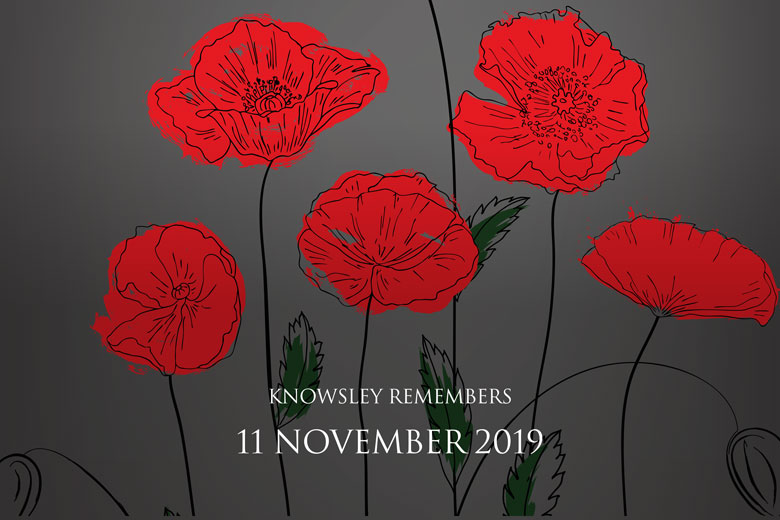 This weekend, and on Monday, 11 November, Knowsley fell silent to remember all those affected by conflict – past and present.

Remembrance Sunday services took place in Prescot and Kirkby, and a service in Huyton marked Armistice Day itself.

Right across the borough, people, groups, businesses and schools paid their own tributes to the fallen and all those who have served, in a variety of different ways.

Here are just some of them.

At Kirkby Resource Centre for Older People, staff and service users created a beautiful and poignant display of ‘The Unknown Soldier’ to mark this year’s Remembrance event.

The artwork has been the result of a lot of hard work and loving attention to detail by a group who are always keen to pay their respects each year. Special thanks to Jack, who handpainted the silhouette of the soldier, whilst the poems pictured above have been written by the creative writing group.

Huyton Library created a display of WWI related material in an exhibition case on the first floor. The items told the story of local man Sergeant Thomas L. Whittaker and included some good examples of greetings cards and postcards sent from the front line.

As visitors to the exhibition learnt, the toll that WW1 had on local communities is hard to comprehend. Huyton alone lost 86 men – they are commemorated on the Huyton with Roby War Memorial outside the Municipal Buildings.

Knowsley’s schools also marked Remembrance. At Park View Primary, the school invited in a veteran to play The Last Post in a service for children and parents. The children also created their own Remembrance inspired artworks.

At Prescot Cemetery and Churchyard, the Friends group once again created a stunning display of ceramic poppies to mark Remembrance Day around the BICC Memorial. The poppies were placed alongside their War Memorial Benches, which provide a year round reminder of the sacrifices of all those who have served in the armed forces.