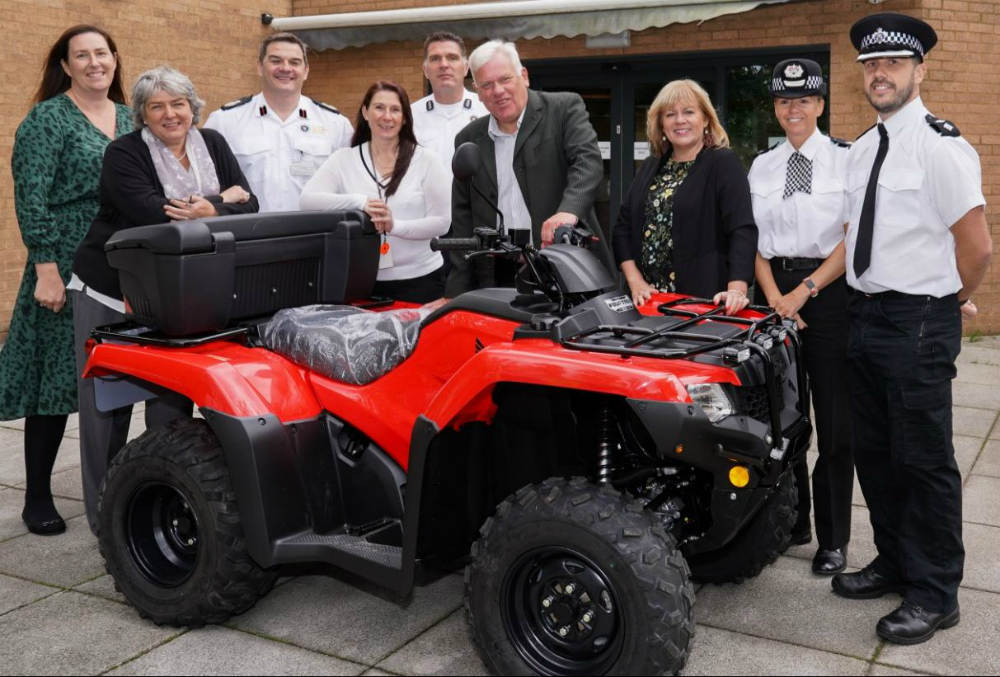 In a bid to tackle the issue of motorbikes and scramblers being used for illegal and anti-social behaviour in the borough, Knowsley Council has funded a brand new quad bike to be used by Merseyside Police to help identify and bring to account those responsible.

The quad bike, which was presented at the recent launch of Knowsley Council’s newly formed Crime and Communities Team, is a vital resource and the money committed by the council ensures that the Local Policing Team have the equipment necessary to best tackle this issue.

Working together to tackle community issues

Cllr Shelley Powell, Cabinet Member for Neighbourhoods and Communities said: “We consulted with our communities and identified that the illegal use of quad bikes and motorbikes was a cause of concerns for our residents.  No agency can tackle this alone and the purchase of this quad bike is our commitment to continuing to address this issue, together with our partners.

“I would urge anyone with information about the storage or use of quad or scrambler bikes to report it to Merseyside Police, in confidence, so that appropriate action can be taken.”

Chief Inspector Phil Mullally, Merseyside Police Local Policing Team said: “Merseyside Police is committed to addressing the nuisance caused by the illegal use of quad and scrambler bikes. Through Operation Brookdale we have had huge success in identifying and removing illegal bikes from the streets, we are grateful to Knowsley Council for the provision of this quad bike which underlines how we are working in partnership to hold those responsible to account and will benefit the residents of Knowsley.”

Acting on feedback from Knowsley residents

Knowsley’s Crime and Communities Team has been formed in response to feedback from residents that tackling crime and anti-social behaviour in Knowsley is a top priority. The team works in collaboration with representatives from Merseyside Police and Merseyside Fire and Rescue Service working alongside key partners from ForHousing and Knowsley Housing Trust in order to address these concerns together.

Help when you need it

If you are experiencing anti-social behaviour or are a victim of a crime you are encouraged to report it to Merseyside Police  online or by calling 101.

Your guide to managing empty homes in Knowsley