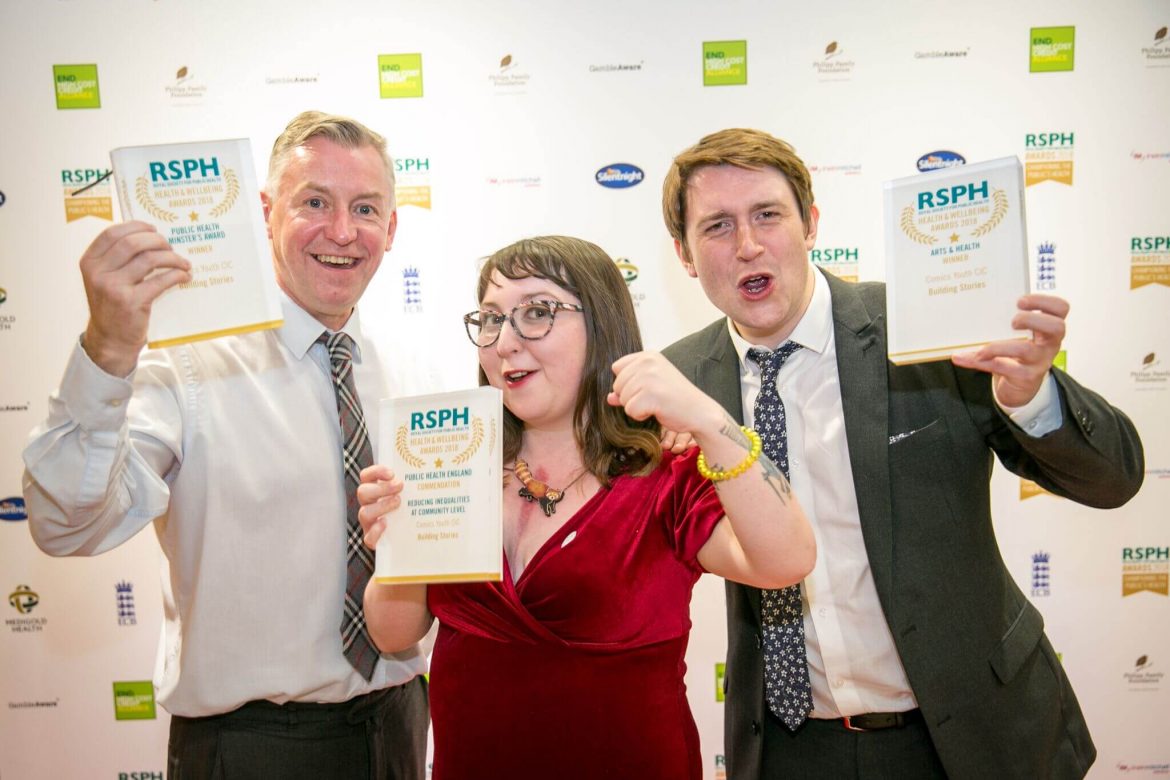 The awards recognise and celebrate a wide range of activities, policies and strategies that empower communities and individuals, improve the population’s health and address the wider social determinants of health.

Comics Youth CIC has been supported to get their initiative off the ground thanks to Knowsley Better Together funding, which brings people and organisations together to deliver more for Knowsley and its residents.

At Thursday’s awards evening in London, Comics Youth picked up three awards for its Building Stories Project. Building Stories is centred around providing a voice for marginalised young people including care leavers, looked after children and children accessing Special Educational Needs and / or Disabilities (SEND) support through providing them with the tools to express themselves, improve their literacy and have their voices heard through publishing ‘zines and comics regarding salient community issues.

“I am absolutely thrilled that we have won three awards, which comes on the back of us picking up an award for Innovation of the Year at the Knowsley Education Awards only a few weeks ago.  The project delivers guided reading and comic book creation sessions to marginalised young people with the aim of supporting them to become content creators rather than mere information receivers. They have the opportunity to write, illustrate and publish their own work. It is such an honour to be recognised in this way.”

The project has delivered a number of outcomes including supporting young people with SEND to read for the first time, encouraging non-verbal young people with autism to publish a comic book about their lives (young peoples’ parents were unaware of their capability to express themselves), supporting a group of LGBT young people to publish a trans survival guide, and publishing 3,000 copies of a self-care zine curated by young people who have experienced mental ill health.  In addition, Comics Youth has recruited 8 volunteers with SEND, gender dysphoria and mental health issues and are in the process of training them to be youth workers of the future.

As well as picking up the Arts and Health Award, the project was also awarded the Public Health England Commendation 2018 for Reducing Inequalities at Community Level 2018 and the Public Health Minister’s Award 2018 (which is made up of all the award winners from the night)

“This is a fantastic endorsement of the excellent work Comics Youth CIC are delivering with our children and young people in Knowsley, particularly given over 750 nominations were submitted for these awards. It’s great to see how Knowsley Better Together is working in practice and having a positive impact on our residents.”

“The aim of the project was to explore and address mental health issues amongst young people in an innovative way and it’s great to see the hard work and dedication from everyone involved at Comics Youth CIC being recognised at a national level. Well done to Rhiannon and team!”