Knowsley Apprentices get their start

As young people across the borough returned to schools and colleges this month, a group of Knowsley teenagers began their first experiences in the world of work through the Knowsley Apprenticeship programme.

Knowsley Council’s Employment Initiatives Team work with a huge range of employers across the borough to identify opportunities for young people and offer support and guidance to businesses looking to take on apprentices.

Since 2008, the successful Knowsley Apprentice programme has helped 1,253 young people into apprenticeships with organisations across Knowsley and the wider Liverpool City Region.

CP Hood have taken on seven apprentices this year alone

CP Hood, an electrical engineering firm based in Prescot, have taken on seven apprentices this year, five from Knowsley and two from the wider city region. They will spend the next four years learning all aspects of electrical and mechanical installations in domestic, commercial and industrial settings, ultimately becoming qualified either as plumbers or as electrical engineers. 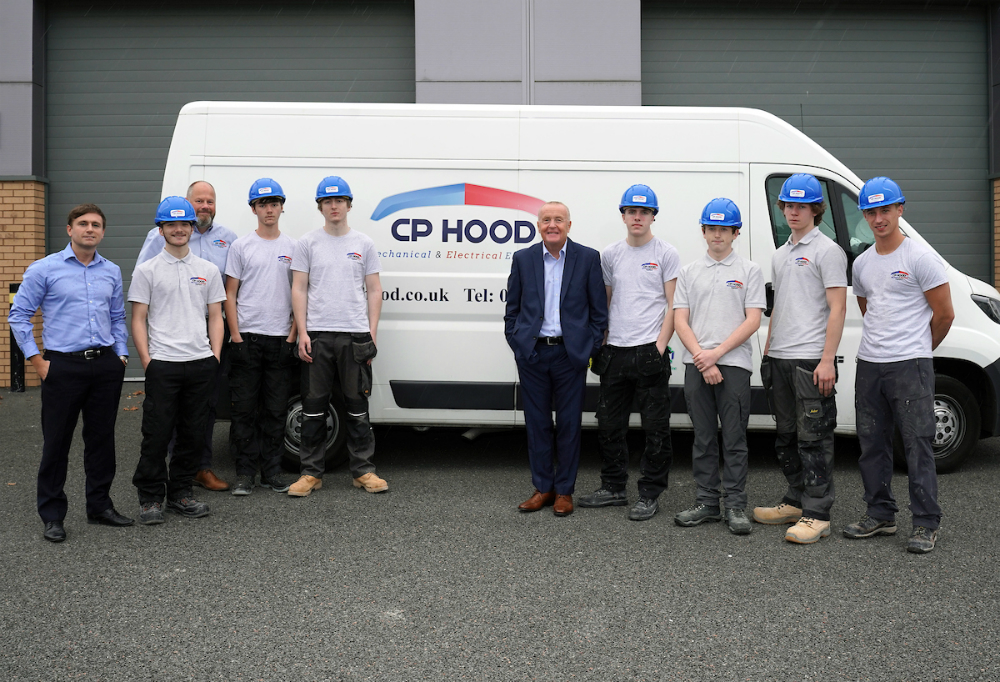 CP Hood, an electrical engineering firm based in Prescot, have taken on seven apprentices this year. Pictured above with Cllr Tony Brennan, Knowsley Council’s Cabinet Member for Regeneration and Economic Development

Craig Hood, Managing Director of CP Hood said: “We have trained more than 30 apprentices over the last 20 years and work closely the Knowsley Apprentice programme to find and recruit candidates for these roles. This year we’ve taken on more apprentices than we ever have before as we are committed to creating opportunities for young people in our area to get a start on the career ladder.”

Tarmac and Huyton Asphalt are committed to creating opportunities for apprentices

Tarmac, the council’s contractor for delivering highways surfacing, bridge and structures maintenance and gully cleansing as well as footway and carriageway repairs have a long-standing commitment to recruiting four local apprentices each year. This year two apprentices have progressed to become Higher Apprentices working towards their HNC I degree courses.

Additionally, Tarmac’s sub-contractor Huyton Asphalt have recruited seventeen year old Warren Dodd (pictured at the top of this story) into a Civil Engineering and Construction apprenticeship which will see him take a unique role in the delivery of Prescot Town Centre public realm improvements. Additionally he will complete an NVQ Level 2 in Construction Operations and Civil Engineering Services which will be funded by HA Civils.

Cllr Tony Brennan, Cabinet Member for Regeneration and Economic Development said: Creating opportunities for young people in our borough, is a key priority for the council. We believe that investing in the next generation is vital to delivering long-term prosperity in Knowsley. Apprenticeships are a fantastic way for young people to gain real-world, experience whilst gaining the necessary qualifications to set them up on a future career path.”

The Knowsley Apprentice Scheme is open to Knowsley Residents aged 16 – 24. Details of the scheme and vacancies can be found at https://www.knowsley.gov.uk/apprentice.