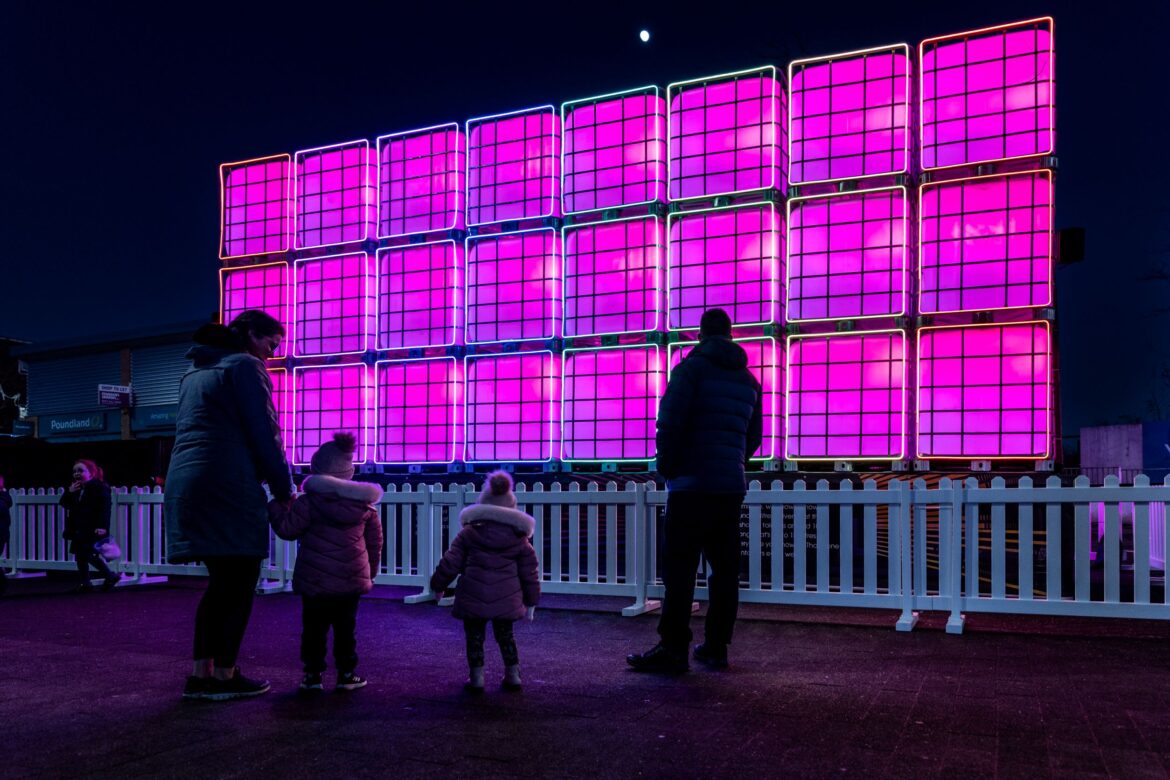 Kirkby lights up for Liverpool City Region Borough of Culture

Knowsley’s year as Liverpool City Region Borough of Culture got off to an illuminating start, with the switch on of Aqualux in Kirkby Town Centre last Friday (14th Jan).

Hundreds of people gathered in the town centre to celebrate this exciting start to the year and visitors young and old quickly got into the party spirit.

Spark Illuminated Drummers brought the beat to the heart of Kirkby with their mesmerising performances and soon after Aqualux was officially switched on by Knowsley Council’s Deputy Leader, Cllr Louise Harbour.

“After months in the planning, we wanted this first event to be really special – and it was! It was wonderful to see so many people and there was such a lovely atmosphere. Everyone was really enjoying themselves and getting involved – dancing and singing along to Aqualux. And that’s what Borough of Culture is all about – we want everyone to get involved and enjoy themselves, create memories and enjoy these special moments.

“And this is just the start, there is so much more happening, and I hope that Aqualux has given people a taste of what to expect throughout the rest of the year.”

Aqualux is the first of a series of light installations coming to Knowsley to form ‘New Dawn’ and which kicks of the borough’s year programme of events.

More about Aqualux
The stunning 8-metre by 3-metre-wide light installation consists of 48 containers which can hold up to 1,000 litres of water – that is the same as the average water consumption of one person in a year, just at home.

Coming to life after dark, the illuminated artwork is accompanied by music to create a memorable and magical experience whilst also raising awareness of the need to conserve and protect our fragile water supplies.

Aqualux will be illuminated between 4pm and 9pm, every day until Friday 28 January. The experience will run on a loop for 20 minutes with a short break in between meaning visitors can arrive at any time after 4pm to experience the attraction. There is no need to book tickets and it is completely free to the public.

As part of Knowsley’s New Dawn programme Aqualux will be complemented by additional light installations across the borough. Details below:

The Magic Wood – 21, 22 and 23 January 2022 – Halewood
Over three consecutive evenings Court Farm Woods in Halewood will be transformed into an enchanted spectacle of light, music and fiery woodland creatures.

The Magic Wood – A Fire Garden by Walk the Plank will be unique to Halewood and will feature performances from Bring The Fire Project, harpist Rebecca Mills and a special family performance set in giant golden birdcage.

Tickets for this event are ‘sold’ out but you can join a waiting list where additional tickets will be allocated if they become available. Please email boroughofculture22@knowsley.gov.uk with your details.

Gaia – 28 January to 17 February – St. Chad’s Church Kirkby
Luke Jerram’s ‘Gaia’ is an astonishing 6-metre-wide replica of the earth based on imagery and data from NASA. Suspended in the air and slowly revolving, the artwork – which will be housed in St. Chad’s Church in Kirkby – gives people a chance to see the planet, floating in three dimensions.

Tall Tales is a brand-new large-scale community artwork that will see Merecliff – a residential 16 storey tower in Stockbridge Village (adjacent to the M57 motorway) – animated and illuminated in light. The dramatic projection which will be accompanied by a soundtrack, will tell the story of local people and communities who have shared their stories captured, interpreted and exaggerated by artists Illuminos.

Submergence, created by world renowned artists Squid Soup,  is a reflective, immersive walkthrough experience that will go on display in Sherbourne Square in Huyton Village. Consisting of thousands of individual points of suspended light, visitors are encouraged to enter the artwork to experience the amazing light illusion for themselves.

Delivered by video projection artist’s Illuminos and accompanied by an atmospheric soundtrack from renowned composer Patrick Dineen the spectacular will create a unique and memorable moment for all visitors. The ballot for tickets for this event has now closed.