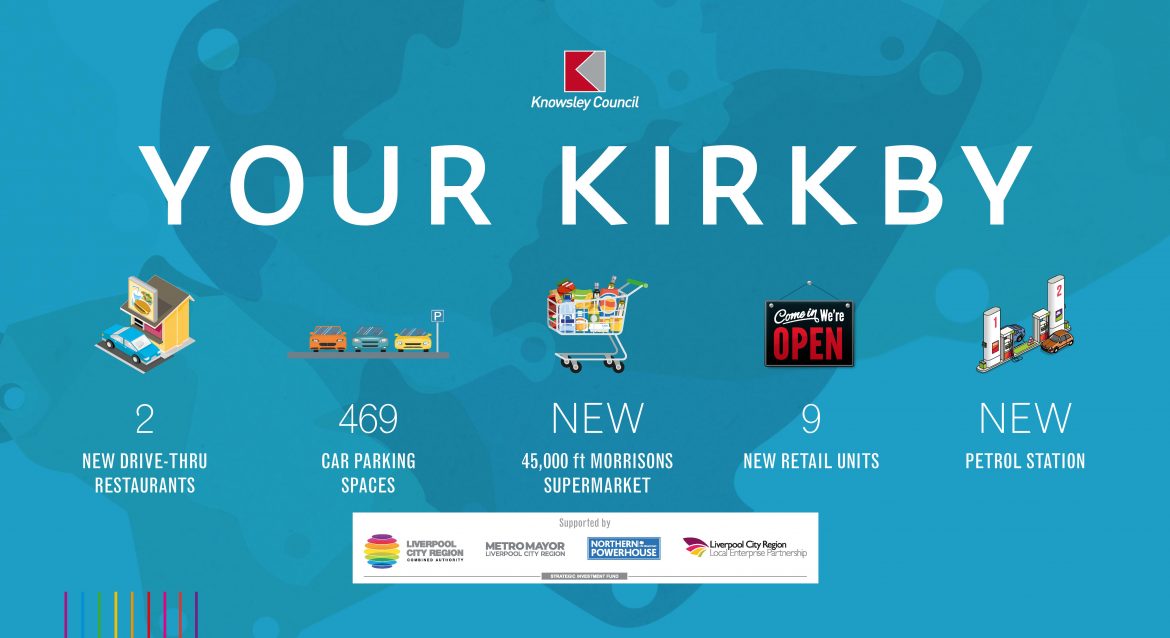 The new retail development in Kirkby is expected to create around 500 permanent new jobs once it is fully open.

The Morrisons superstore, Morrisons petrol station, KFC and Taco Bell are already open for business, with a new and larger Home Bargains store due to open in the coming months.

As well as arranging for the physical improvements in the town, Knowsley Council’s priority for Kirkby was to support local people into the jobs which were created.

Of the 56 jobs at Taco Bell, 54 have gone to Kirkby residents whilst KFC have given 32 out of 50 jobs to residents of Knowsley.

Councillor Tony Brennan, Regeneration and Economic Development Cabinet Member, said “This is fantastic news for local residents.  Not only is there a better choice of shops and facilities in Kirkby, but the jobs in those places are going mainly to local people.

“Home Bargains will be starting their recruitment drive shortly and we have interest from a range of other businesses wanting either to set up or to expand their offer into Kirkby.  We are expecting those new businesses to create even more employment opportunities for local people.

“I’m incredibly proud of what has been achieved in such a short space of time.  Less than two years ago, we signed the deal to take ownership of Kirkby Town Centre.  Some people said that they would “believe it when they saw it” – well, look at where we are now – a retail development delivered despite a pandemic, more choice for residents and visitors, more people visiting the town centre, increased footfall for our existing businesses, and new jobs for local people.

“And this is just the start of our ambitious plans for Kirkby.  We are now turning our focus to delivering a multi-screen cinema with food and drink outlets.”

If you’re a Knowsley resident and would like advice and support around employment and training opportunities, please contact the Knowsley Works team.  The team can help you with job searches, applications, and interview preparation.  For further information and support, email the team at employment.team@knowsley.gov.uk.