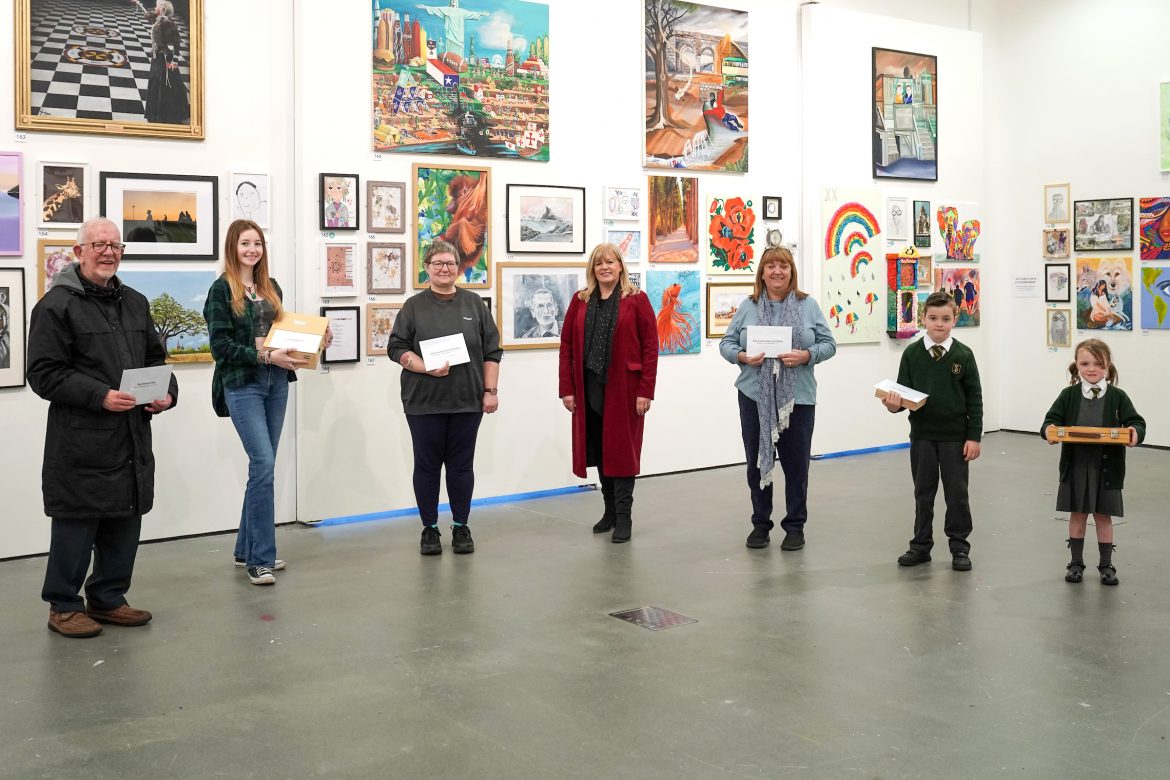 Winners of the Visitors’ Choice Awards at Kirkby Gallery’s Open Art Exhibition have been announced.

Cllr Shelley Powell, Knowsley’s Cabinet Member for Communities and Neighbourhoods presented winners with their prizes at a special event hosted at Kirkby Gallery.

Each of the winners were voted for by visitors to the exhibition and represent the voice of the community.

“Huge congratulations to each of the winners. This year’s Open Art Exhibition has been our biggest one yet, so the winners should be incredibly proud that their work was voted best in the exhibition. I am delighted to have been able to present them with their prizes.

“I’d also like to extend my thanks to the hundreds of artists for submitting their work into the exhibition. The display of more than 230 works is a vibrant and inspiring reflection of our residents and those who have a close connection with Knowsley and expresses the power that art and culture has to bring people together.”

THE WINNERS
Adult Artists, each winning vouchers for Rennies Gallery on Bold Street:

Young Artists (under 18 years of age), each winning an art supply kit:

Reg Robinson Prize, a special award in tribute to local artist Reg Robinson, a dedicated painter who entered works into the Open Art Exhibition from its outset and sadly passed away in 2013:

The Open Exhibition is one of the final displays to be presented at Kirkby Gallery before next year when Knowsley will be Liverpool City Region Borough of Culture.

Cllr Powell added: “Knowsley will be Liverpool City Region Borough of Culture in 2022, and this display gives a flavour of what the year will be – a celebration of the vibrant and rich talent here in Knowsley. I hope our neighbourhoods and communities are getting excited for what is set to be a fantastic year.”

Borough of Culture
Knowsley will become the Liverpool City Region Borough of Culture in 2022. The year long celebration of culture – in all its forms – will include events and moments across the borough with something to interest people of all ages and backgrounds.

The Borough of Culture was introduced by Metro Mayor Steve Rotheram and the Liverpool City Region Combined Authority in 2018 to encourage and enable each Borough to deliver cultural programmes which create a lasting legacy across the whole region.

It is delivered as part of the Combined Authority’s 1% for Culture programme where 1% of the Authority’s £30 million funding each year is set aside to support culture and creativity.

The Borough of Culture title is awarded annually by the Liverpool City Region Combined Authority on a rotating basis to each of the six local authorities that make up the city region.

In addition to the investment from the Liverpool City Region Combined Authority, Knowsley Council has also invested significantly to support the impressive year long programme which will be announced in full later this year.

To keep up to date with everything that is happening and is planned follow www.cultureknowsley.co.uk