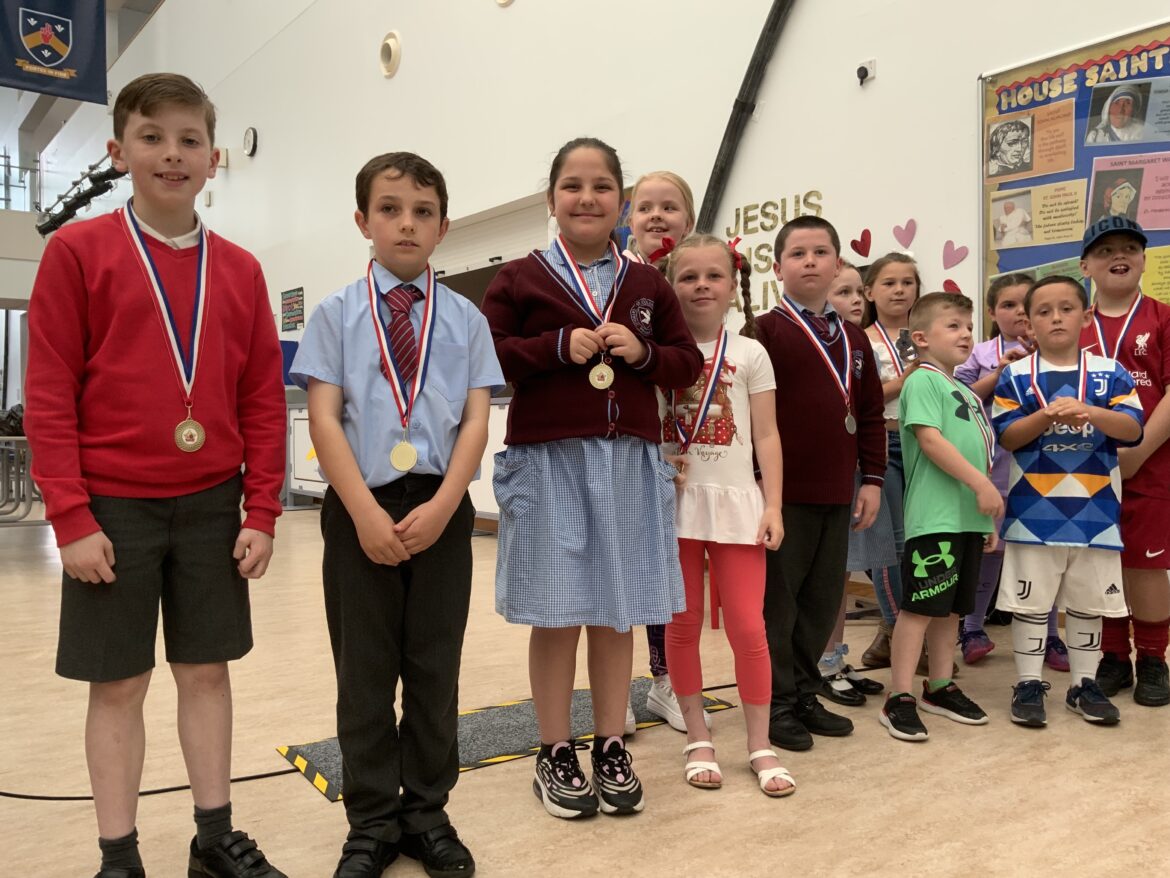 The project, led by Liam Anderson, Headteacher at St. Anne’s Catholic Primary School, aimed to use sport and sporting culture to increase socialisation and participation amongst children.

To help the children tell the story of how the project has benefited them, Knowsley City Learning Centres, a company who support schools with the innovative use of technology, interviewed the children throughout the five weeks. The resulting film was shown at the celebration event to the children, their parents, and guests.

Knowsley has an illustrious sporting heritage and Huyton itself has been the birthplace of many sporting cultural heroes including Ultimate Fighting Champion (UFC) star, Paddy ‘The Baddy’ Pimplett, Steven Gerrard and Peter Reid.

The Leader of Knowsley Council, Cllr Graham Morgan, also attended the event and handed out medals to the children who had taken part in the project.

Liam Anderson, Headteacher at St. Anne’s Catholic Primary School, said: “Following the pandemic, we were really keen to help encourage socialisation amongst our pupils, and we decided that sport and celebrating Knowsley’s sporting heritage during the Borough of Culture celebrations would be the perfect way to do this.

“By working with our partner schools, we were able to develop a programme that introduced pupils to a new sport, in a new environment and with a new group of young people they hadn’t met before. Opening up a range of sports and helping forge new local connections and friendships.

“The project has proven to be a real success and we’ve already seen the impact it has had in helping some of our pupils come out of their shell and give them the confidence to be more expressive in social situations.

“Today’s celebration was an opportunity to show parents, teachers and partners the impact of the project and reward the children for their work and participation”

Cllr Graham Morgan, Leader of Knowsley Council, added: “It was fantastic to attend this celebration event and meet all those involved with this great project. Sport is a fantastic way to bring young people together and help develop important life and social skills.

“Knowsley has a rich sporting culture, and it is important that we use this to inspire our next generation of sporting heroes. I would like to thank all of the teachers involved in putting together this successful project.”

The school’s project comes just a couple of weeks before the Birmingham 2022 Queen’s Baton Relay and Knowsley’s Sporting Legends Relay.

More about Knowsley’s Sporting Legends Relay
From 18 July to 23 July, Knowsley will host a week-long celebration of sport as part of its Borough of Culture events programme. The Knowsley Sporting Legends Relay will travel the length of the borough with support from local communities, sporting groups, local sportspeople and even the odd famous face popping up. The 6-day showcase event will celebrate Knowsley’s rich and varied sporting heritage, as well as its past, current and future sporting heroes.

There are lots of FREE opportunities for the public to get involved and free fun family events and activities to enjoy.

Find out more and register to take part here https://www.cultureknowsley.co.uk/sporting-legends-relay/