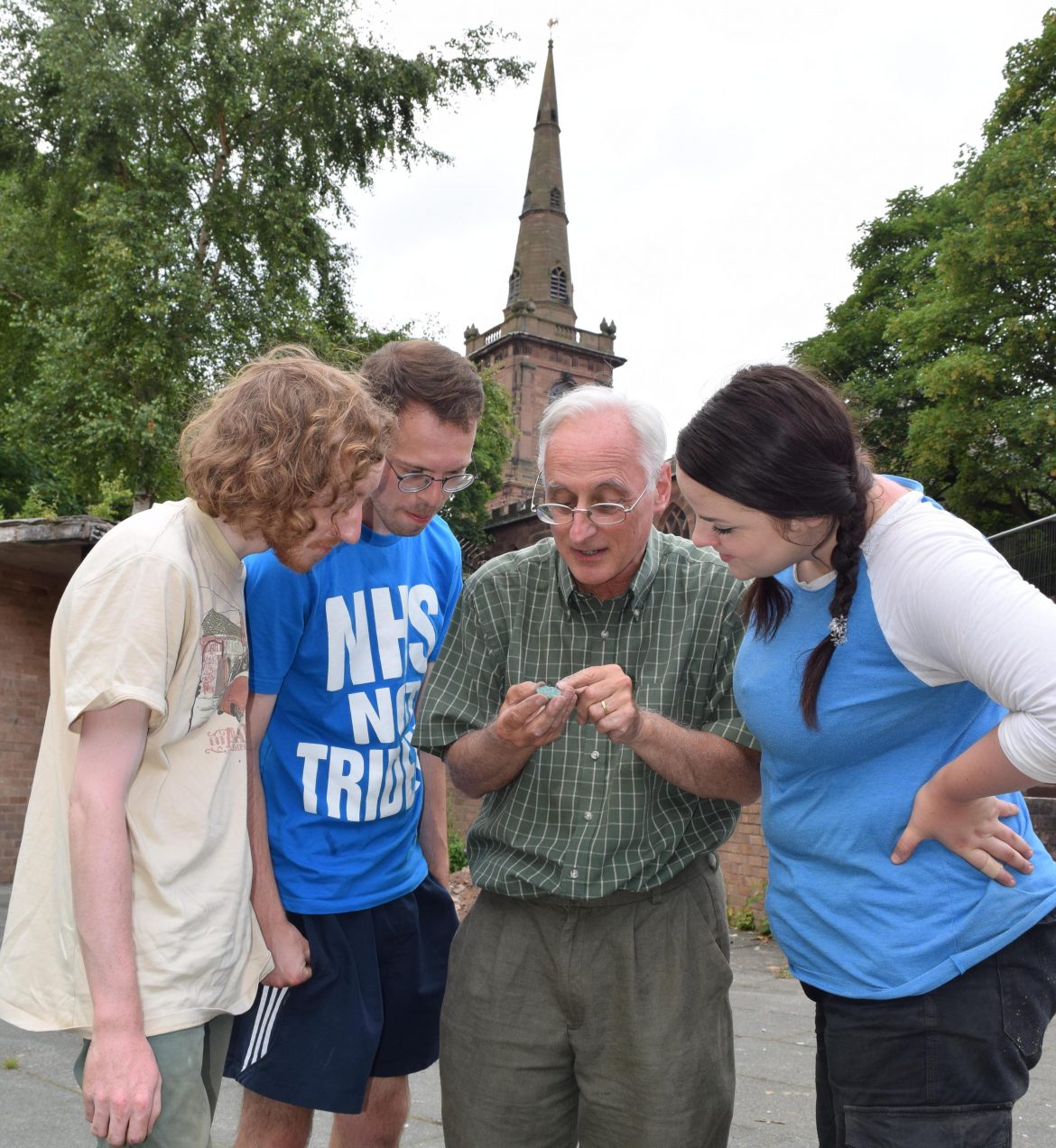 A team of archaeologists has discovered pieces of Prescot’s past in test pits dug in Market Place.  The quality of the findings means that more work will take place to dig deeper and discover more artefacts.

The digs took place in Market Place, which was the site of Prescot’s market for nearly 700 years.  In one of the test pits the team found part of the wall of Prescot’s Market Hall which was built in 1859 and demolished in 1964.

In another pit, near the Churchyard, the cellar wall of what appears to be an eighteenth century building was found.  Another pit revealed the carefully piled stone footings of what appears to have been a seventeenth century building.  Unusual artefacts uncovered include a Victorian toy plate, a button made from bone, and a small castor that was probably attached to the foot of a bedpost! Other smaller finds include pieces of pottery and clay pipes from the 1700s and 1800s, glazed and unglazed in all manner of patterns and colours.  In all likelihood this pottery was made in Prescot, as the town once had several potteries, and Market Place was of course the location of the town’s annual ‘Mugg Fair’ where locally made cups, mugs, plates, bowls, pipes and pots would have been among the items sold.  The bricks of the Market Hall and the other buildings discovered will also have been made from Prescot clay.

Why are the digs happening?

The digs are part of the Prescot Townscape Heritage Initiative (THI), which is supported by the Heritage Lottery Fund.  The public open space at Market Place will soon be completely redeveloped and improved as part of the THI project.

The digs were led by Dr Robert Philpott and Professor Harold Mytum from The University of Liverpool along with interns funded by the THI. A full record and report on the findings will be prepared, which will be offered to Prescot Museum for potential display.

“Before we started the digs, we were unsure whether any archaeological remains would have survived the demolition and landscaping. The results have been very positive, opening a fascinating window into the lives of the people of Prescot over the past three centuries.”

“This archaeological work is really fascinating and it’s wonderful that we are continuing to learn more about Prescot’s past as we are creating a new future for the town.  The redesign of Market Place is the single biggest project of the THI and will have a considerable impact on the look, feel and function of Prescot Town Centre and will complement the other amazing developments in the town including the new Shakespeare North Playhouse and the Multiplex 8 Screen Cinema.”

Would you like to take part in future digs?

The archaeologists will return to the site in August to dig two larger, deeper trenches in the hope of finding more artefacts and reaching earlier historical eras.

If you would like to take part in digging, sorting and cleaning the finds in two – hour slots during 3 to 11 August, email your details to Lyndsey-Jane Kevan Against the backdrop of the parish church, Niall (left), Will and Natalie examine the coin held by Professor Harold Mytum.