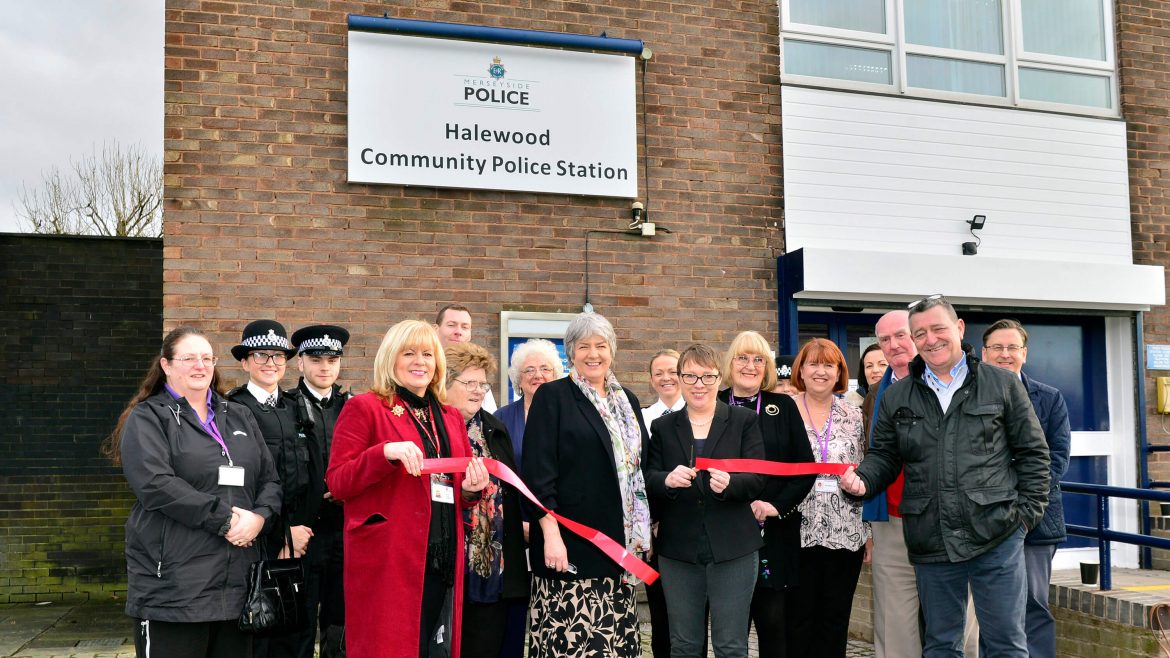 Halewood Police Station, which first opened its doors nearly 60 years ago, has been refurbished to ensure the facilities serve the area’s local neighbourhood police team. The project has also seen a new Community Police Station opened to enable officers and PCSOs to meet members of the public and hold surgeries.

The Police Commissioner, Jane Kennedy, committed to revitalising the station on Leather’s Lane at a meeting of Halewood Town Council in February 2019. Since that announcement, work has been undertaken to refresh and modernise the working spaces, improve access for visitors, update security and make alterations to the ID suite. Existing partitions and walls have been removed to provide a more efficient, open-plan working space for the local policing team.

Space has also been set aside for a Community Police Station – the second in Knowsley since the opening of the shared Community Fire and Police Station in February 2018. Community Police Stations are designed to be accessible, visible centres which enable members of the public to meet their local policing team, share their concerns and feedback and provide a base for surgeries. They are a key part of the PCC’s strategy to transform Merseyside Police’s stations with the aim of saving money on its annual running costs which can be redirected straight into frontline policing.

“I’m delighted that following a major refurbishment programme we are now in a position to re-open Halewood Police Station and I’m delighted that Maria was able to give her time to carry out the official unveiling.

“Halewood Police Station dates back to 1960 but, prior to this project, it had seen no significant investment since it opened six decades ago.

“The force need stations which are modern and appropriate for the purpose of policing in the 21st century and this refurbishment ensures the officers, PCSOs and staff working from Halewood Police Station have got the right working environment and facilities to fight crime, now and in the future.

“Access to police stations is high on the agenda for communities across Merseyside, and by opening a new Community Police Station within the Halewood site, it is my hope this station will give local people the ability to reach out to their neighbourhood police team in a visible, handy location. By doing so, I hope this station will be an asset not just for Merseyside Police, but for local people and the wider community for years to come.”

“We recognise that our residents care very much about community safety so I’m delighted to see the re-opening of Halewood Community Police Station. This is a valuable resource that offers a visible and accessible location and we’re delighted to work with our Police colleagues and continue to build safer communities.”

The project to revitalise Halewood Police Station is part of the Commissioner’s 10-year strategy to modernise Merseyside Police’s buildings and facilities, while working to reduce the annual running costs of the estate by an estimated £2.5m.

The move to refurbish the existing station follows several consultations with Knowsley Borough Councillors and Halewood Town councillors, local partners and the public since the Commissioner launched her 10-year estates strategy in 2014.

The renovations were part funded by earmarked capital reserves specifically set aside for the estate strategy and external loans from approved sources, in accordance with the Prudential Code for capital finance.

Knowsley road closures you need to know about

Keeping Knowsley active now and in the future