Home Lifestyle and what's onBorough of Culture Going on holiday this summer? ….. look who you might bump into 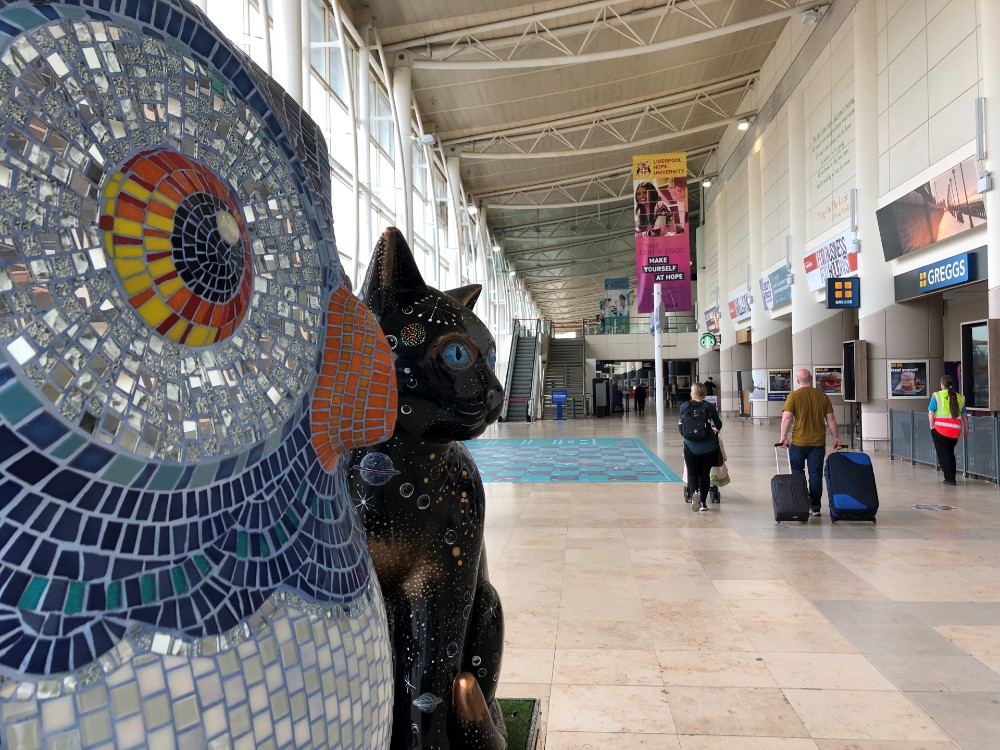 Passengers jetting off from Liverpool John Lennon Airport or those taking a break by train from Lime Street Station this summer might be in for a little surprise. There are some new arrivals brightening up people’s journeys, as part of Knowsley’s celebrations as the Liverpool City Region Borough of Culture.

These elaborately decorated creatures are part of Knowsley’s Owl & the Pussy-Cat sculpture trail, which is running until 4 September.

“Our Owl & Pussy-Cat trail is such a fun way to celebrate the borough’s links to Edward Lear and I am thrilled that a few of these wonderful creatures have been able to venture beyond Knowsley to help us ensure as many people as possible know about the trail and get involved.

When you consider the sheer volume of people coming in and out of the airport and station over the summer months, we couldn’t be happier to have the sculptures take pride of place there. I hope this helps to raise awareness of the trail and not only attract residents of the Liverpool City Region to Knowsley but also some national and international visitors too!”

At Liverpool John Lennon Airport, Luna and Twinkle are welcoming holidaymakers and taking pride of place in the Arrivals Hall. Luna was designed by Liverpool based mosaic artist Debbie Ryan who finds inspiration in nature and works sustainably and often sourcing her materials from local suppliers and uses methods of recycling, up-cycling or repurposing. Luna gives a nod to one of Knowsley’s key cultural links and explores how the owl motif features in the works of William Shakespeare – with the sound of an owl often used at key points in his stories. Luna is joined by Twinkle – a pussy-cat designed by artist Colin Gibson who took inspiration from the journey of the Owl and the Pussy-Cat sailing under the stars.

Liverpool Airport is expecting over 1 million visitors over the summer holidays with around 100 flights departing and arriving each day.

“We are delighted to be able to host both Luna and Twinkle here at Liverpool John Lennon Airport and be a part of Knowsley’s Owl & the Pussy-Cat sculpture trail. Luna and Twinkle will be seen by thousands of the region’s holidaymakers passing through as well as being a great welcome for overseas visitors to the region also arriving at the airport.”

At Liverpool Lime Street Station Foss and Lady Kitty are located on the concourse near Platform 10. Foss pays homage (in an interesting interpretation) to Edward Lear’s most loved pet – Foss the cat. Foss has been designed and painted by Donna Newman, a midlands-based artist who is no amateur when it comes to painting huge anima sculptures. In fact, Donna has raised more than £250,000 for charity auctioning off some of her previous commissions from similar sculpture trails across the UK.

With Foss at Lime Street is Lady Kitty by Emily Parr. Originally from Prescot and now working at the Shakespeare North Playhouse, Emily has taken her inspiration from Elizabethan blackwork embroidery – something that would have been popular at the time that Prescot was the only place in the country outside of London to have a freestanding purpose-built theatre. In addition to her designs being brought to life on Lady Kitty, Emily’s work with the community can also be seen in the newly opened Shakespeare North Playhouse in Prescot.

Liverpool Lime Street station welcomes on average 420,000 thousand passengers each week. Station Manager, Kyla Thomas said: “We are really proud to have Foss and Lady Kitty at the station. It’s a great way to welcome passengers back to the city of Liverpool. We’re excited to be to be part of Knowsley’s Owl and the Pussy-Cat sculpture trail”

The sculpture trail will run all over the summer holidays and includes 32, 2-metre-high owls and pussy-cat which are located across Knowsley in parks, public spaces, transport hubs and town centres. A further 50 smaller sculptures – decorated by local school children – are also on display in public buildings in Knowsley. People can download a free App, follow the trail, chart their progress in finding all of the sculptures and take lots of photos and share online tagging @cultureknowsley.