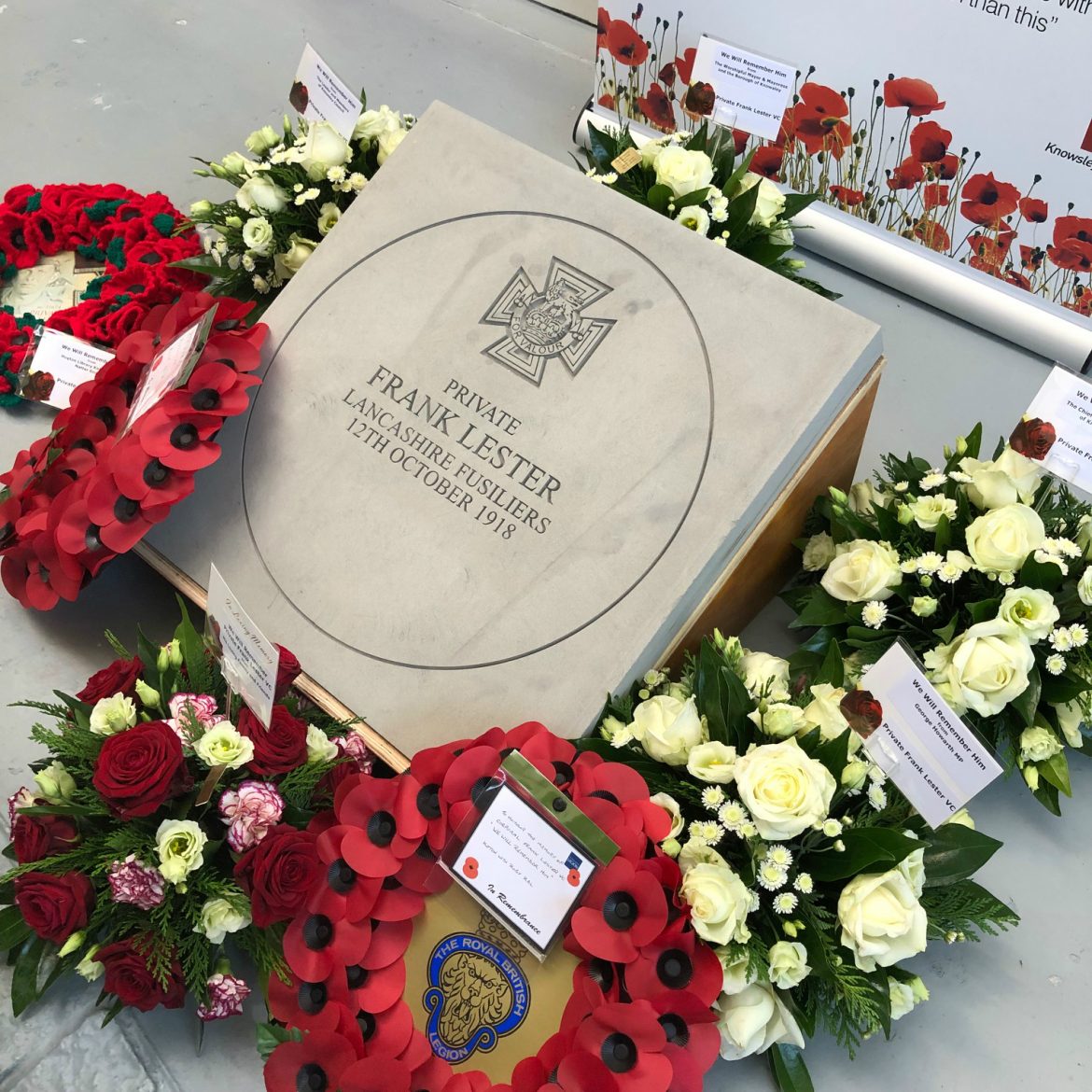 A commemorative stone, commissioned in remembrance of a war hero who was born in Knowsley, was unveiled at a moving ceremony held last week.

Corporal Frank Lester, who was born in Huyton but moved to Hoylake as a child, was killed whilst serving in the 10th Lancashire Fusiliers in October 1918, aged just 22. Tragically, it was just one month before the war was to end.

In sacrificing his own life in order to save his comrades, who were under intense fire from an enemy sniper, Frank was honoured posthumously with a Victoria Cross medal, the highest honour this country can give for bravery.

And at a ceremony held at Huyton Library on Thursday, 15 November, descendants of Corporal Lester were among the guests who gathered to pay tribute to his bravery, and to unveil a commemorative stone which will soon be laid in Huyton Village centre, so that generations to come will be reminded of his sacrifice.

Cllr Graham Morgan, Leader of Knowsley Council, said: “It was a really moving ceremony and one which I was honoured to attend.

“Though Frank’s surviving family never got to meet him, it was clear that they think about him a great deal, and are so proud of his bravery – as we all should be.

“Frank was just 22 when he was killed, performing an act of great bravery and selflessness. His story reminds us of the horrors of war and the sacrifices made by those who serve their country. I’m delighted that the commemorative Victoria Cross Stone which bears his name will now be permanent reminder of his story for generations to come, helping us keep our promise that we will remember them.”

Amongst the many tributes presented at the commemoration was a hand-knitted wreath of poppies, created by the Knit and Natter group, who meet regularly at Huyton Library.

Who is Corporal Frank Lester?

Frank Lester was born in Huyton, the second son of John Lester a market gardener and his wife Ellen. The family moved to Hoylake when Frank was one, and he was later educated at Hoylake National School.

After leaving school in 1910, he started to learn the trade of a joiner, but on the family moving to nearby Irby in 1912 the rest of his time (before joining the Army) was spent in assisting his father on his market garden. Frank shone as an instrumentalist, becoming organist of the little chapel on Irby Mill Hill.

Frank Lester joined the army in March 1916 and was posted to the 10th Battalion South Lancashire Regiment. His previous knowledge of drill and discipline grounded in him while at school and in the Boys Brigade enabled him to make rapid progress so much so that he was soon promoted to Sergeant Instructor training troops at Prees Heath in Shropshire and Kinmel Park in North Wales.

He was transferred to the 10th Lancashire Fusiliers in June 1917 being was sent to France in March 1918, having reverted to Private as was usual practice on going on war service.  He entered the thick of the fray and after a fierce encounter was one of the thirty left out of a battalion of eleven hundred men.  He was slightly wounded on 21st March 1918 and was in hospital at Rouen.  He regained two stripes and came to England soon after on rest leave; was stationed at Cromer and drafted out again to France in September.

The citation for the award of the Victoria Cross reads: “During the clearing of the village of Neuvilly on October 12th 1918 with a party of about seven men under an officer, he was the first to enter a house from the back door and shot two Germans as they attempted to get out by the front door.  A minute later a fall of masonry blocked the door by which the party had escaped.  The only exit into the street was under fire at point blank range. The street also swept by the fire of machine guns at close range.

Observing that an enemy sniper was causing heavy casualties to a party in a house across the street Corporal Lester exclaimed “I’ll settle him” and dashing out into the street shot the sniper at close quarters, falling mortally wounded at the same instant.  This gallant man well knew it was certain death to go into the street and the party opposite was faced with the alternative of crossing the fire swept street or staying where it was and being shot one by one. To save their lives he sacrificed his own.”

The first intimation on his bravery came to Mrs Lester in a letter which told of the death of her gallant son.  Lieutenant Roderick Graham wrote:

“I regret to tell you of the death of your son Corporal F. Lester, 10th Lancashire Fusiliers. He had not been very long in my company, but I had noticed him as a very good soldier.  It has been a great blow to me as he was with me when he was shot by a sniper.  He died at once.  I have brought his bravery to the notice of my colonel.”

Corporal Lester was of a retiring disposition and when writing to his parents rarely mentioned anything appertaining to his military life.  He was 22 years of age when he was killed.

He is buried in the Neuvilly Communal Cemetery Extension France, Row B, Grave 15.

(Thanks to Phil Mather of the Archives at The Fusilier Museum, Bury for the information above).