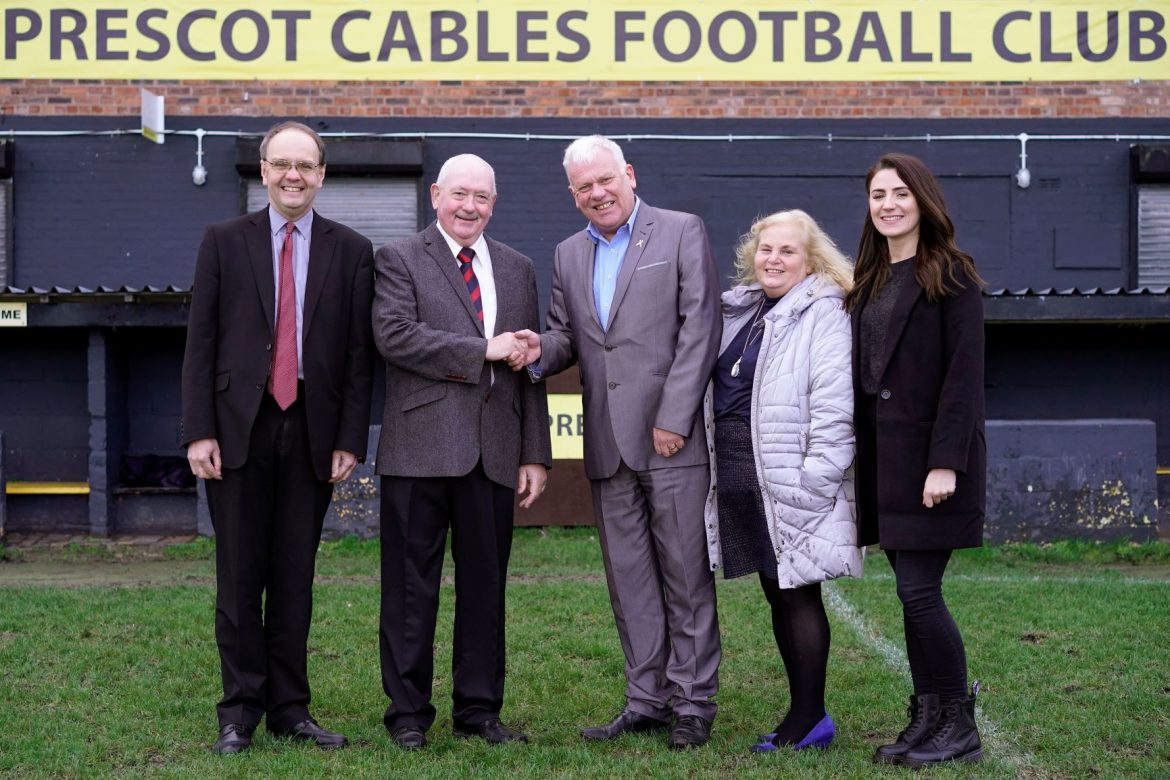 Knowsley Council has completed the freehold purchase of Volair Park – the home of Prescot Cables Football Club. This will secure the future of the Club, which was looking uncertain due to the current landlord refusing to grant another lease.

Here’s what you need to know about the purchase, what it means for Prescot and the Club and the some of the facts around this decision.

Why is the Council stepping in?

The current owners of the Ground have confirmed that they will not offer the Club a long term lease. As a result the Club could be expelled from the football league and cease to exist.

Why would this matter to the people of Knowsley?

Prescot Cables has been a big part of the town since 1884. They have played at the Hope Street Ground since 1906 and alongside being such an integral part of the local community, the Club also provides a number of additional benefits. This includes providing facilities for charity matches and local junior cup finals, fielding eight youth teams from ages 6 to 18 and importantly attracting visitors to Prescot who spend their money in local shops and pubs – helping to improve the local economy.

If the Club were expelled from the league, the site would become vacant and could fall into disrepair. This would be a significant blight on the town and a magnet for anti-social behaviour. At a time when many private investors, developers and independent businesses are showing interest in Prescot this could hinder the Council, and others’, ability to regenerate the area.

This purchase will also secure the site for football and recreational purposes in the future, as opposed to potential alternative uses which could be proposed by the current owners.

How much is the Council investing and where is this money coming from?

The Council is investing £300,000 of one off monies, from an existing Council reserve that has been set aside specifically to support the development of the evening economy in Prescot. This money had already been earmarked to support the regeneration of Prescot and is a one off fund.

No money has been taken from any other Council budget to support this investment.

Are there risks associated with this?

There are risks associated with any project but the Council is purchasing an ‘asset’ and will mitigate against any risks (and protect its investment) through the lease and legal agreements with the Club.

On balance, the Council feels that the risk of doing nothing outweighs those associated with the investment.

Is the Council just giving the money to the Club?

No. The Council is purchasing the freehold of the site on which the ground is built. In return the Club will pay annual rent of £12,000 (this will increase in line with inflation) which in time will cover the additional cost of purchase and generate additional funds for the Council.

All money invested will be repaid over time which will then allow the Council to reinvest in other projects in Knowsley.

What would happen if the Club went into financial difficulty or could not pay the rent?

The Council would always want to work with the Club to support it in raising the funding needed to meet its obligations. However, non-payment of rent could lead to the Club forfeiting the lease and result in it being terminated.

In this instance the Council, as freeholder, would have complete control over the Ground as an asset and be able to redevelop it for other purposes, subject to planning permission.

Why is the Council proposing a 99 year lease?

A long term lease (99 years) provides the Club with the most security that it has had in its history and in turn puts them in the best possible position to generate additional funding from the league and raise finance to invest in the ground.

Is there any truth in the rumour that the Council is funding this through a reduction or cessation of funding for foodbanks or front line services?

No. As outlined above, the funding for this project has already been earmarked in November 2016 for a project that will help to boost the evening economy in Prescot.