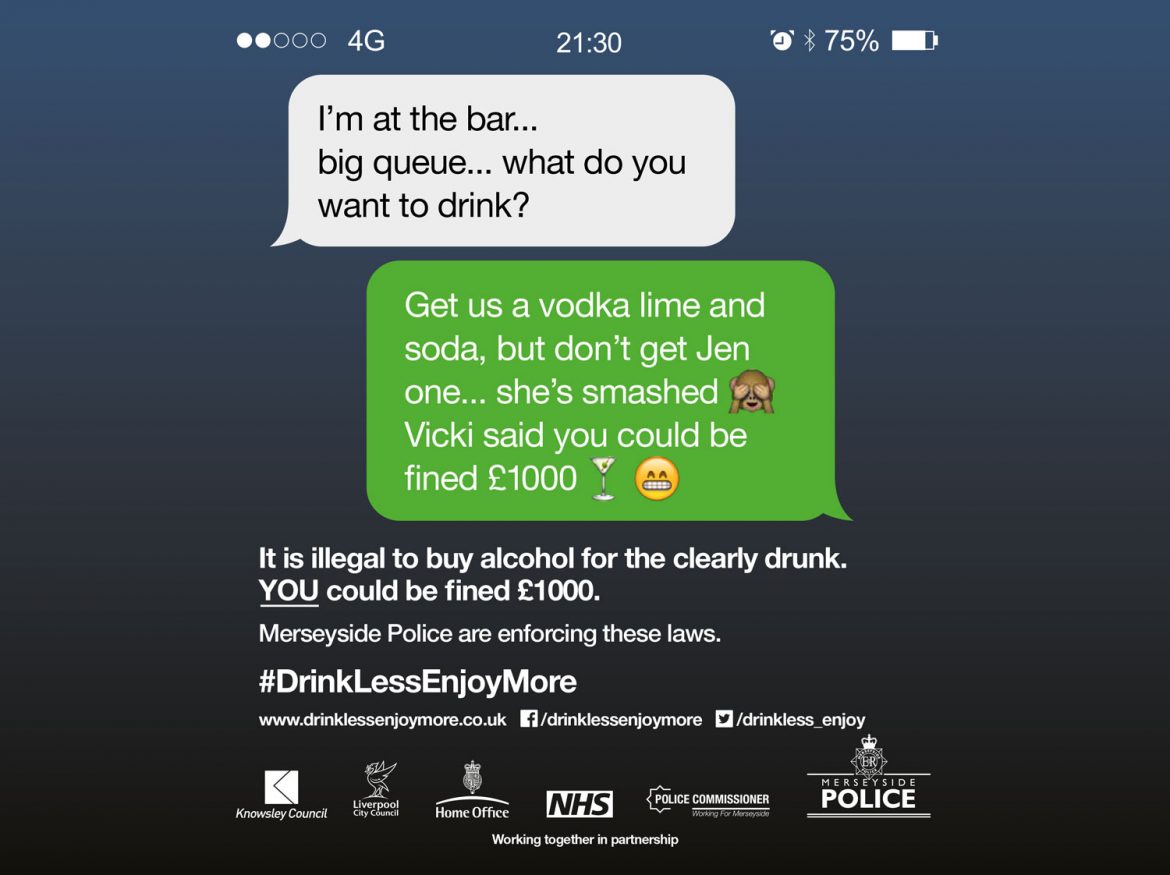 An initiative to reduce drunkenness is getting underway in Knowsley and across the region.

‘Drink Less Enjoy More’ (DLEM) encourages people to cut back on how much they drink at home before going out, as well as how much they consume when visiting bars, pubs and clubs.

Knowsley is joining with Public Health teams across Merseyside and Cheshire rolling out the campaign which has successfully run in Liverpool since 2015.

The initiative aims to raise awareness of the 2003 Licensing Act, which states it is illegal to:

Both offences are punishable with a fine of up to £1,000 and premises found to be serving people who are clearly drunk are also at risk of being stripped of their licence – but local research shows only half of people are aware of the law.

The DLEM campaign features advertising with text conversations between friends to illustrate how their night out could be ruined if they ignore the law, including: “Dean, don’t get too smashed mate! We won’t get served anywhere later” and “Looks like an early taxi home for us lads. They won’t serve us because Ryan’s bladdered…Gutted L.”

“Drunkenness can have immediate health consequences such as alcohol poisoning, and can contribute to sexual violence, accidents and violent crimes.

“The aim is to encourage people to cut back on how much they drink at home before going out as well as how much they consume when visiting bars, pubs and clubs.”

Police and licensing teams will be actively working with bars to promote compliance with the laws in order to reduce drunkenness across Merseyside and Cheshire.

“DLEM isn’t aimed at those who drink responsibly – it’s there to help identify the minority of people who have had too much alcohol and could end up being a danger either to themselves or others. People need to ask themselves whether they want their night to end early because they’ve been refused entry to a bar due to them having consumed too much alcohol too early. Drink sensibly and enjoy your night out with friends otherwise you may ruin their night out too if they have to take you home early. “Merseyside Police is committed to reducing violent crime and making the streets safe and the continuation of this initiative with our partners should help to make Liverpool and our surrounding towns even safer places for locals and visitors alike to enjoy a night out.”

New pedestrian crossings in use