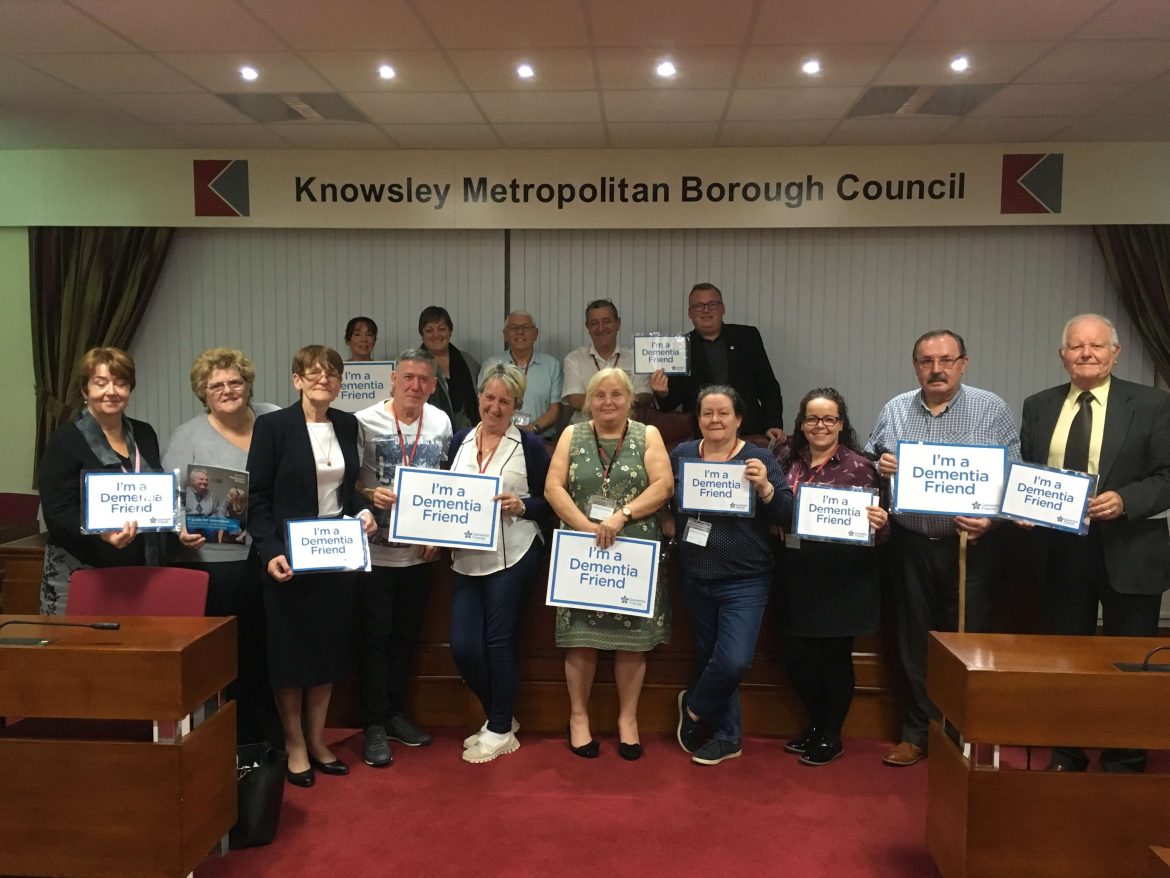 A group of Knowsley councillors have become Alzheimer’s Society’s ‘Dementia Friends’, taking a key step towards helping end the stigma for the 850,000 people living with dementia across the UK.

The 16 councillors took part in an information session with the charity, so that they could gain a greater understanding of the issues affecting people in Knowsley with dementia as well as their friends and carers.

This initiative aims to help people understand what it might be like to live with dementia and turn that understanding into action, Alzheimer’s Society launched Dementia Friends in 2013 and has already reached 2.5 million Dementia Friends.

“Knowsley councillors have signed up to show our support for a Dementia Friendly Community by becoming Dementia Friends and we are encouraging people across Knowsley to do the same. With a growing number of people living with dementia, it’s more important than ever we all have a better understanding of the condition.

“Knowsley Council have just released our new dementia-friendly strategy and we are working hard to create a community in Knowsley where people affected by dementia feel more accepted and supported. Dementia Friends is about giving people an understanding of dementia and the small things they can do that can make a difference to people living with dementia.

“From helping someone find the right bus to spreading the word about dementia, it can help make our local community a better place to live.”

1,606 people are living with dementia right here in Knowsley

Rachel Yates, Regional Public Affairs Officer at Alzheimer’s Society said: “Someone in the UK develops dementia every three minutes and almost everyone knows someone whose life has been affected. Yet too many people feel excluded and face the condition alone, so hopefully others in Knowsley will follow the lead of the Knowsley councillors and become Dementia Friends to help end the stigma.

“Dementia is one of the biggest health and care challenges our country faces – one that all of society must respond to. Too many people are not getting the support they deserve and are entitled to. Too many families are struggling to get by. We all have a part to play in improving the lives of people living with dementia. But we need everyone in Knowsley to play their part in making the borough dementia-friendly.”

What is a Dementia Friend?

A Dementia Friend is someone who has gained a basic understanding about what it is like to have dementia and the small ways they can support someone living with the condition. Alzheimer’s Society is calling for government and local authorities to help make communities more dementia friendly by encouraging people to become Dementia Friends.

If you are interested in becoming a Dementia Friend or helping create more communities that are dementia friendly, go to www.dementiafriends.org.uk to find your nearest information session or to volunteer as a Dementia Friends Champion.

Alzheimer’s Society is here for anyone affected by dementia. For information and support, call the National Dementia Helpline on 0300 222 1122 or visit alzheimers.org.uk.