Home For the record Council condemns night of vandalism 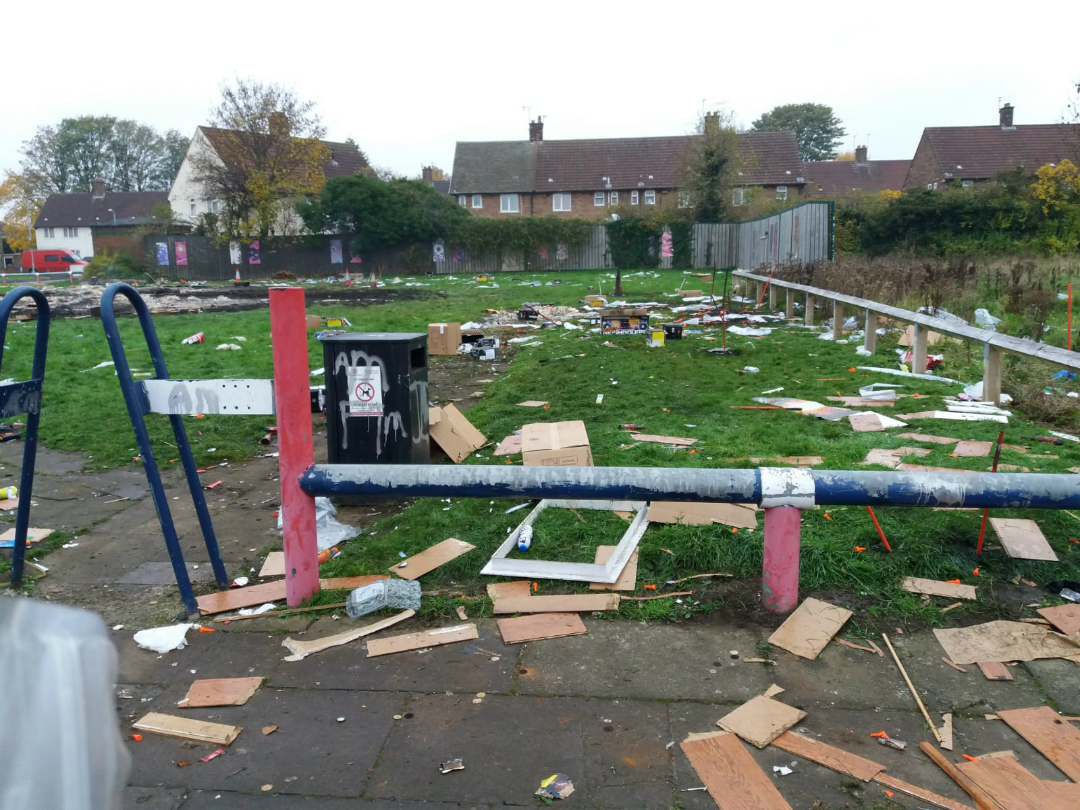 Following a number of incidents in Knowsley on Bonfire Night (Monday, 5 November), the council has condemned the actions of those who left a children’s playground in Kirkby destroyed and set fires in an area of Huyton.

During the evening, a fire deliberately set in the play area of Memorial Park in Kirkby, destroyed play equipment for children.

Meanwhile, furniture, rubbish and other fly-tipped items were set fire to on Reeds Road, Huyton, leaving the street in a completely unacceptable state with a large amount of debris left behind. A number of unoccupied flats were also set alight – thankfully, thanks to the actions of Merseyside Fire Service, nobody was injured. The aftermath of illegal fires set on Reeds Road, Huyton, on Bonfire Night

Cllr Shelley Powell, Knowsley Council’s Cabinet Member for Communities and Neighbourhoods, said: “People in Knowsley are utterly disgusted by the actions of those who behaved in such a wreckless and destructive way last night. It is devastating that the mindless actions of a few individuals can have such a negative impact on so many others in our neighbourhoods.

“Looking at the aftermath this morning it’s quite incomprehensible that anyone could do this, more than likely in their own communities and impacting on their own neighbours, families and friends.

“Bonfire night is not a justification for vandalism that not only destroys much loved community facilities but also puts lives at risk. Those responsible need to understand that there will be consequences for their actions.

“The council, police and fire service take this extremely seriously and as well as having to clean up the mess these people have created, we’ll also be putting our efforts into identifying them and ensuring they face the full force of the law. Anyone who was involved – whether that was in setting the fires or in flytipping the material which was used in the fires – should be in no doubt that you can expect to hear from us soon.” The aftermath of illegal fires set on Reeds Road, Huyton, on Bonfire Night

“I’d also appeal to anyone who has information about those responsible to do the right thing and tell us what they know. After all, the whole community is going to end up paying for the clean-up operation, money which could have been used on other local services.”

Cllr Powell added: “I also want to send a wholehearted ‘thank you’ to the fire officers who attended these incidents last night – their swift and professional response ensured that nobody was harmed and the community is extremely grateful for their actions. However, it is simply unacceptable that our brave fire officers should be put in harm’s way so unnecessarily.”

Anyone who has information about any incidents which took place last night is urged to contact Crimestoppers on 0800 555 111 – information can be given anonymously. You can also ring 101 or send information to Merseyside Police via social media – on Twitter @MerPolCC or Facebook.