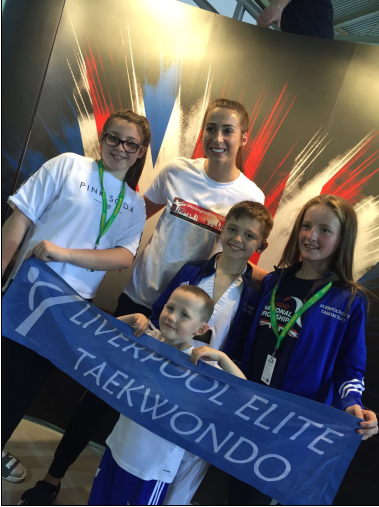 Liverpool Elite has history of doing well in their competitions including the Ultimate 1 – 1 in Barnsley, the Yorkshire Open Championships and the International Hanguk Kids Cup in Belgium. Now, the Huyton-based taekwondo club can add success at the Taekwondo British National Championships in Manchester to their list of great achievements.

Almost 1,000 competitors attended the event which was the biggest taekwondo competition of the year in Britain.

24-year-old Jake Moscrop who is Liverpool Elite’s club coach and from Huyton, led by example and achieved gold in the senior -87kg category, meaning he retained his title of National Champion from 2016.

Lincoln Littler, 10, Prescot shone in the – 36kg category and was crowned a National Champion when he won gold.

12-year-old Emily Clark from Huyton fought well enough to earn herself a bronze medal in the female cadet -47kg category.

Emily’s brother, 11-year-old Dylan Clark, also attended the competition but unfortunately missed out on a medal after leaving the quarter final of his fight in the last few seconds.