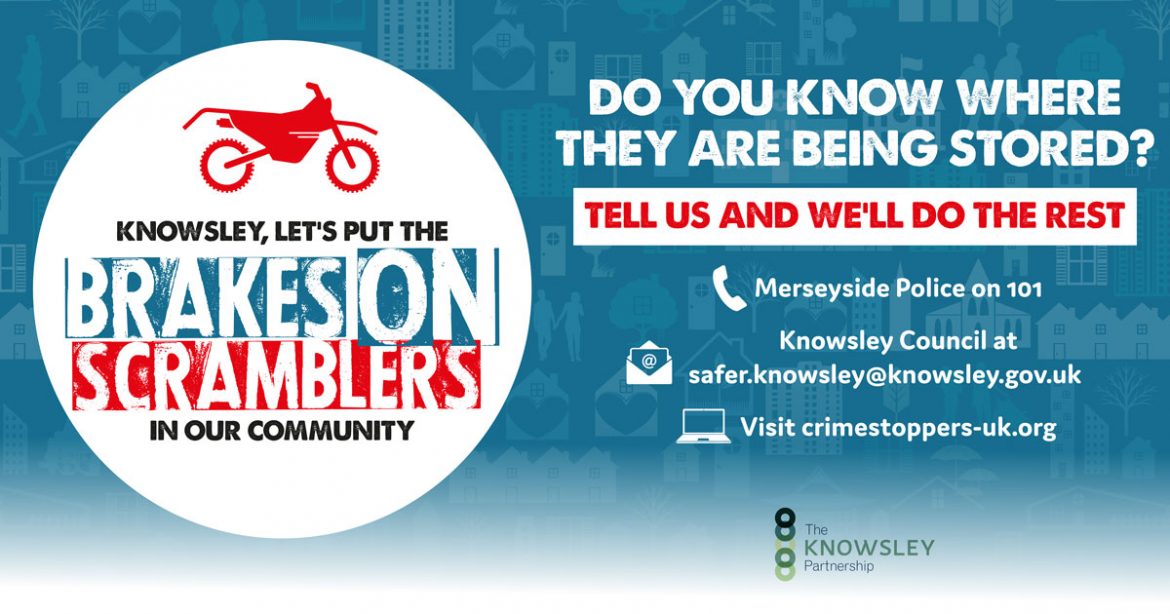 Knowsley Council has launched the Brakes On campaign, aimed at tackling the anti-social and illegal use of scrambler bikes and motorbikes.

Working with key partners including Merseyside Police and housing associations, the purpose of the campaign is to encourage Knowsley communities to work together and put the Brakes On Scramblers by reporting where they are being stored.

Knowsley Council understands residents may have questions about scrambler bikes, namely what is and isn’t the illegal use of them. Read on for our FAQs:

What is considered anti-social or illegal use of a scrambler bike?
Scrambler bikes are being used illegally and anti-socially when they are unregistered, ridden on public roads, and by people with no licence, or insurance.

These bikes are often ridden at speed, and dangerously. Residents will often see these riders performing acts such as wheelies which means the rider doesn’t have control over the steering and brakes, so putting themselves and the public at risk.

Riding scrambler bikes, motorbikes and quad bikes in green spaces and parks also cause noise disturbance and can lead to the destruction of property. This is ultimately at the public expense as it is the duty of Knowsley Council to repair any damage caused by these vehicles.

My neighbour owns scrambler bikes, but I don’t know if they are using them illegally? Shall I report it? And will they know it was me?
Yes, please report it. Together with our partners, including Merseyside Police and housing associations, we can then work as a partnership to investigate their storage further and establish if their use is anti-social or illegal. If you report this to Knowsley Council or Crimestoppers you will remain anonymous.

What happens when I tell you where they are stored?
When you report any information about where a scrambler is stored the Knowsley Community Safety Partnership will work together to investigate further. Working collaboratively, they will begin gathering any additional evidence. With enough evidence Merseyside Police will then be able to execute a warrant on the property with a view to seizing the bikes.

Residents are reminded that although action may not happen straight away, the information they provide is crucial. Knowsley Community Safety Partnership is fully committed to tackling antisocial use of scrambler bikes, they will act upon any information received and investigate fully matters brought to their attention.

The Knowsley Community Safety Partnership is made up of partners including Merseyside Police, Knowsley Council’s Crime and Communities Team, Merseyside Fire and Rescue Service, and Housing Providers.

I know someone who is storing quad bikes/electric bikes – do you want to know about these too?
Yes, we want to address the anti-social and illegal use of all off-road vehicles and urge residents to share any information they have about the storage of scrambler bikes, motorbikes, electric bikes and quad bikes.

What action will be taken against those found owning/riding bikes illegally?
Merseyside Police has the power to seize a scrambler bike if it is unregistered, being ridden carelessly or in a way that is likely to cause alarm or distress. Vehicles seized for these reasons can be released back to the rider/owner on production of the necessary documentation and subject to a recovery fee. If unrecovered after 28 days the bike will be disposed of.

Bikes seized because they are unlicenced or uninsured can be recovered by their owner within 7 days on presentation of a valid drivers licence and insurance as well as recovery fees. Failure to do so will see the vehicle disposed of after 14 days.

Will seized bikes be crushed?
The decision as to whether the vehicle is crushed or sold is dependent on the vehicle’s condition and perceived auction value.  Most, if not all unregistered vehicles seized under these powers have a low auction value, are poorly maintained vehicles and go on to be crushed.  This also prevents them going back in to circulation to be used illegally in the future.

Raising awareness of neglect in Knowsley

Putting the ‘Brakes On’ scrambler bikes