Local boxing legends John Conteh MBE and Tom Stalker are the latest famous names to sign up to take part in the Knowsley Sporting Legends Relay – a week-long celebration of sport taking place from 18 to 23 July 2022.

John and Tom are legendary names in the local area, both hailing from Knowsley and going on to achieve sporting success in their chosen field.

John Conteh, who received his MBE for services to boxing said:

“I am delighted to be able to lend my support to the Knowsley Sporting Legends Relay. It’s a great chance showcase all kinds of different sports to local people and who knows, we might even inspire a future world champion or Olympic medalist.”

“I only got into boxing when I was 18 and its something I wish I had done before. Engaging children and young people in sport is such a positive thing for them on so many levels. I hope lots of young people and families come along and join in the fun that’s happening across the week. I’m really looking forward to being part of it.”

Both John and Tom are getting involved in the Super Sports Day event, which will be taking place on the last day of the relay – Saturday 23 July at Eddie McArdle Playing Fields in Kirkby between 12 noon and 6pm.

They will be joined by other Knowsley boxing superstars including Sarah Saleh as they take part in a huge community parade which will get the day started. As well as being part of the parade John will also feature in a Q&A on stage as whilst Tom is programming an afternoon of bouts featuring boxers from Kirkby ABC including WBO champion Natasha Jonas.

John Conteh began boxing at the age of 10 at a boxing club in his hometown of Kirkby. At 19 he won the Middleweight Gold Medal at the British Commonwealth Games and went on to win the WBC Light-heavyweight title in 1974. In addition to his career as a professional boxer he has also appeared in a number of films and TV programmes. 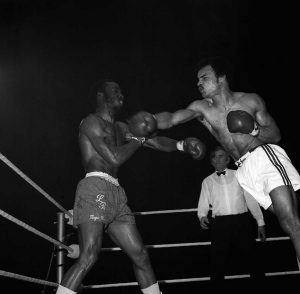 Tom was born and raised in Huyton and despite only starting boxing at 18, had his first competitive fight the following year. He trained at St. Aloysius Amateur Boxing Club and went on to win numerous Commonwealth Games medals and captained Great Britain’s most successful ever boxing team at the London Olympics in 2012.

The Knowsley Sporting Legends Relay will travel the length of Knowsley with support from local communities, sporting groups, local sportspeople and the odd famous face like John and Tom

Over the course of a week, young and old will travel across the borough showcasing their sport and celebrating the many ways in which sport connects communities and creates shared memories for all. There will be lots of opportunities for local residents to get involved – either in sporting activities or cheering along their neighbours and friends who may be taking part.

The full details and schedule for the relay is available on www.cultureknowsley.co.uk

Month to go before Knowsley Feelgood Festival and Flower Show