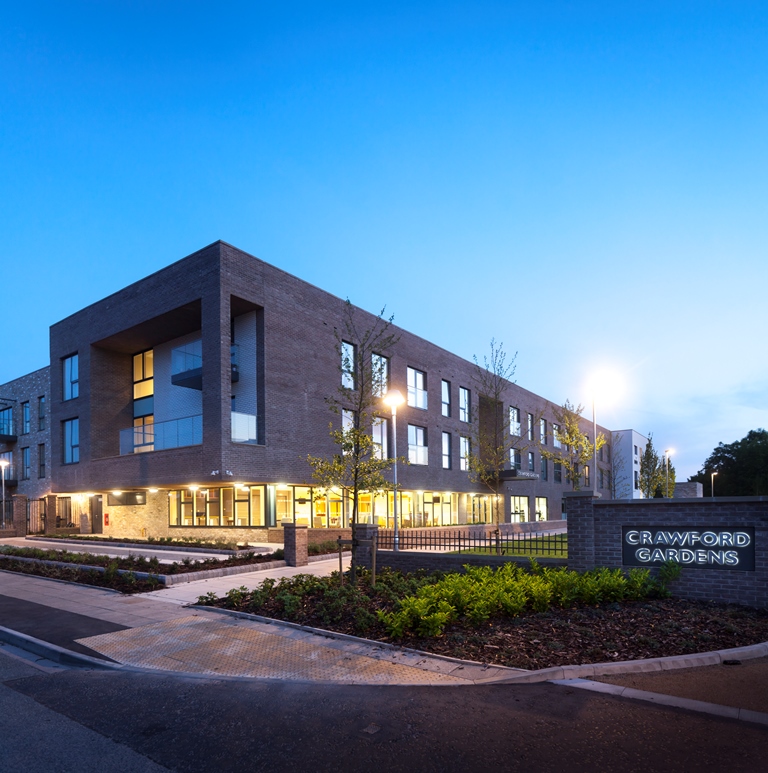 An extra care housing development in Huyton has been recognised at this year’s 2016 RICS (Royal Institution of Chartered Surveyors) North West Awards.

The development, on Alamein Road, was designed by PRP Architects and includes a small household of seven apartments specifically designed for dementia sufferers.

The aim of Extra Care developments, such as Bluebell Park, is to provide high quality housing, support, and care services which enable and encourage people to live independently for as long as they wish to and are able to. This includes additional support and care to avoid admission to hospital or long-term care where possible.

Awarding Bluebell Park, the judges said they were impressed with the “attention to detail in each of the homes and the strong sense of community, thanks to a range of on-site facilities”. These include a restaurant, hairdressing salon and landscaped outdoor spaces incorporating a bowling green.

Through to the Grand Final

Bluebell Park was one of 40 of the region’s most impressive and community beneficial property schemes which battled it out for top honours at the 2016 RICS North West Awards.

The prestigious annual contest – held at The Titanic Hotel, Liverpool on Friday 22 April – was a celebration of inspirational initiatives in the region’s land, property and construction sectors. Martin Roberts, television presenter and property expert – best known for TV programme, Homes under the Hammer – was the host for this year’s sell-out ceremony which attracted close to 400 local property professionals.

Now Bluebell Park and all the other North West category winners, which included the new Alder Hey Children’s Hospital in Liverpool, will go on to compete against other regional winners at the national RICS Awards Grand Final on 14 October 2016 in London.

“Model for the future”

At its opening in October last year, Bob Taylor, CEO of the First Ark Group, said:

“The official opening of Bluebell Park marks the culmination of a state-of-the-art project to invest in the borough by collaborating with likeminded partners to deliver homes and support services that will have a lasting and positive impact on health and wellbeing in the communities in which we all live and work.

“This type of supported living provided by Bluebell Park is very much the model for the future, helping to address some of the strain placed upon our hospitals and reduce public costs to the NHS and social care budgets.”

Another development on the horizon

KHT is currently working on its next Extra Care facility in Prescot – The Watch Factory – which is being built together with partners Iliad, Knowsley Council and Harbur Construction.