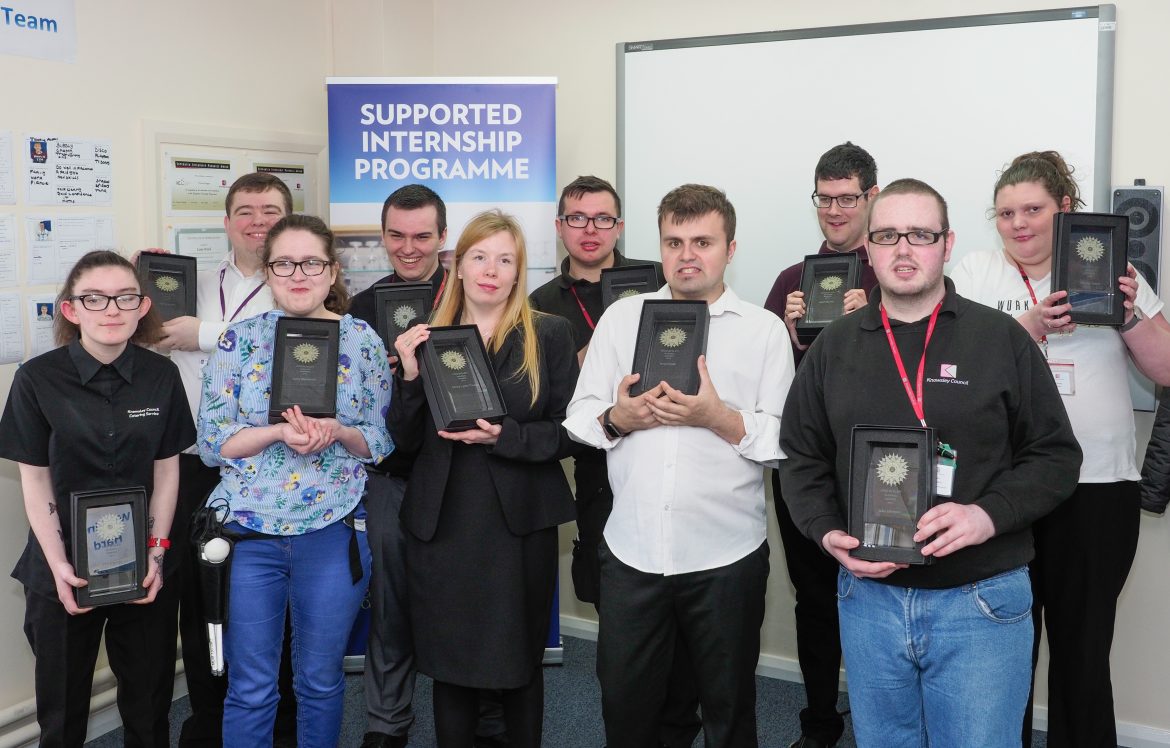 This fantastic group of young adults were once again celebrating their personal successes as they reflected on how far they’ve each come, thanks to a work placement programme for people with learning disabilities or difficulties.

Working in various roles across Knowsley Council the employees settled so well into their jobs, quickly becoming valued members of their teams, that they even scooped a joint award at last year’s Knowsley Business Awards.

The Knowsley Supported Internship Programme saw the 11 young adults start work with the council in 2016, working in services including security, business support and catering. For many, it was their first ever experience of paid employment, giving them more personal independence and a chance to develop skills and confidence that they may not have had before.

As a result of their own determination and commitment, and with support from Knowsley Community College tutors, a council mentor and their colleagues, each one of the intake proved their value within their workplace and soon became important members of their teams.

Watch: Gill, mum of Anthony, explains how the work placement project has benefited her son

With nine of the group going on to secure employment at the end of their 12 month placements, and two others choosing volunteering roles, the icing on the cake came when the whole group picked up a joint ‘Corporate Social Responsibility Award’ at the Knowsley Business Awards in November.

Now each of them has been presented with a replica of the award, so that they can all be reminded of their achievements as part of the first cohort of the Knowsley Supported Internship Programme.

The group were reunited at a celebration event last week where they picked up their awards and several spoke movingly to the gathered guests to explain what impact the opportunity to take up an internship with the council had had on their lives, and how much they appreciated the support of their tutors, mentors and colleagues.

Anthony Cunningham, who completed the programme in September 2017 and then secured employment with the council’s Transport Services, said: “The programme has had such a positive impact on me – it has given me the skills and confidence to gain employment as well as making lots of new friends. I really enjoy coming into work each morning”.

A second group of 10 young adults also began their work placements last September and the council hopes that the experience will be just as successful for them, too.

Working together to stop child exploitation